What Hillary's Nomination Means To Me

#ImWithHer--and why I have been since second grade. 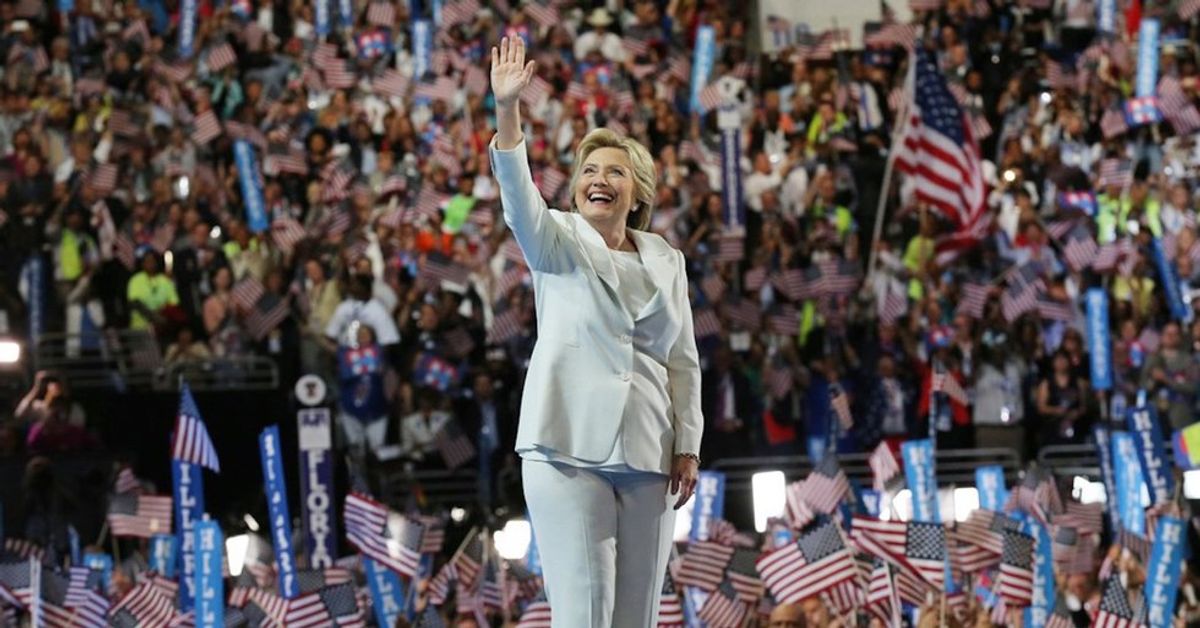 When I was in second grade, my family took a trip to Washington, D.C. when my sister became a finalist in the Intel Science Talent Search. I have always been an avid reader and my parents of course wanted the trip to be educational for my brother and me. So wherever we visited, I ended up with a book from the souvenir shop.

My favorite book from that trip was actually one from the hotel's souvenir shop. It was a book about all the presidents and their families, going all the way up to George W. Bush, who was president at the time. The book mainly focused on the presidents and their wives, and I remember reading the section on the Clintons over and over again. None of the other first ladies inspired me like Hillary did. She was not just a first lady--she was also a lawyer and a civil rights activist in her own right. From that small section on her, I was hooked. I remember bringing the book to my parents and saying, "Mommy, Daddy--Hillary Clinton is so cool!"

I did more research from there. I learned that Hillary Clinton was an activist in the truest sense of the word. When she saw something wrong in the world, she did not take that as cause to simply complain about the state of the world. She saw it as a challenge and a call to action. I learned that she was truly an advocate for all people, publishing reports which would become the basis for countless reforms and programs created to better the lives of everyday people throughout the entire socioeconomic spectrum.

Later that school year, my class was assigned a project on important women in history. We were instructed to pick a woman, write a report, and also create a visual component. I knew right away that I was going to do my project on Hillary Clinton. For the visual component, I made a bust out of Crayola modeling clay. It was truly hideous and too graphic for this article (though you can view it on my Twitter if you so desire), but it was made with love and admiration.

I have been unofficially campaigning for Hillary's presidency since I was a wide-eyed second grader, shortest in the class but always answering questions the loudest and the proudest. For anyone who questions why I am voting for Hillary, or why I support her so passionately, it is because I have been learning since second grade that she is without a doubt the most qualified person for the job. It is not just because she is a woman, although her achievements in spite of gender barriers have inspired me throughout my life. She has the experience, she has the knowledge, and she has the spirit and resolve to truly effect change in this country. She has the plans to improve the lives of all people, and her track record as the first female chair of the Legal Services Corporation, as a Senator, and as Secretary of State has proven that when Hillary has a plan she can truly make positive changes.

Furthermore, Hillary is an advocate for equality. She has worked consistently to better the lives of racial, ethnic, socioeconomic, and gender as well as sexual minorities. Her platform is steeped in initiatives to allow everyone to have equal rights and privileges under the law, as opposed to the campaign of her opponent, which is steeped in racist, sexist, and classist rhetoric. Hillary spent much of her time after law school listening to the problems of everyday people. She has worked tirelessly throughout her political career to improve their lives with bills, reforms, and programs. She is truly a leader of the people, by the people, and for the people.

For me, Hillary Clinton's nomination means an affirmation of my childhood dreams that someday, I, too could help change the world.

Hillary Clinton's nomination means that, as a woman, I can do anything.

Hillary Clinton's nomination means that I am able to vote for a candidate who is not just the better choice, but the best candidate for the presidency.

Hillary Clinton's nomination means I know that the candidate I am voting for will be able to improve the lives of countless individuals.

Hillary Clinton's nomination means voting for the candidate who will lead this country on its pathway of greatness through efforts to sustain and contribute to ongoing progress.

Hillary Clinton's nomination means voting for the candidate who I have believed in since second grade. #ImWithHer. Hopefully you are, too.