Let's Talk About Holidays Other Than Christmas

Let's Talk About Holidays Other Than Christmas

Why don't we celebrate Hanukkah and Kwanzaa more? 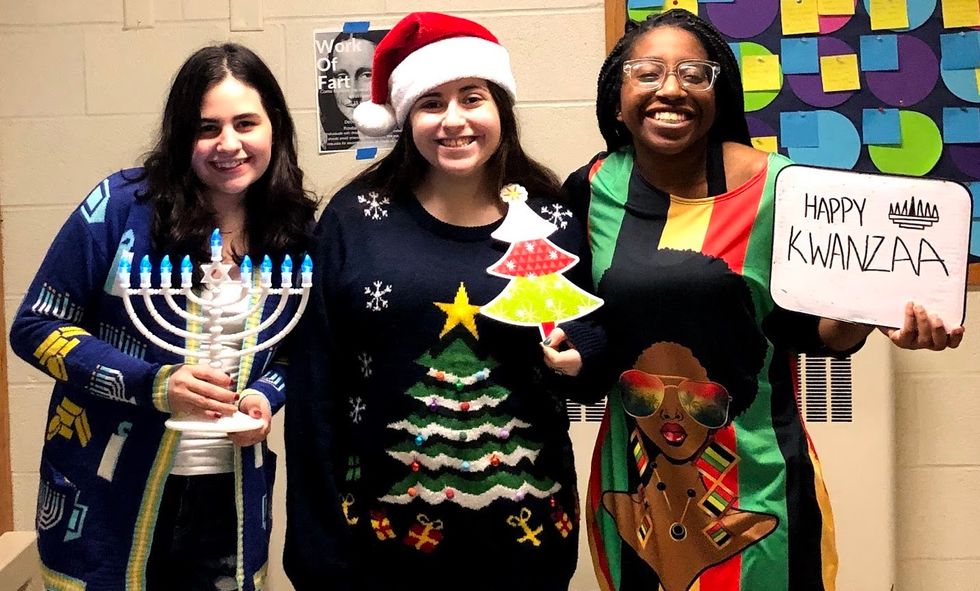 It seems that when December comes around, everyone is Christmas crazy. Some seem to forget that not everyone celebrates Christmas. And that a lot of those who do, do not celebrate for religious purposes.

December is very much Christmas centered in all aspects. One of those aspects being commercial stores, do you know how hard it was for some of my friends to find Hanukkah sweaters? I don't even think that Kwanzaa sweaters exist!

Why aren't there more movies that have to do with other holidays? Why is everything about December 1st hits? Admittedly, there are a few episodes from shows that correctly depict Hanukkah and Kwanzaa.

There aren't enough though, because when we are young, we watch all types of cartoons and TV shows. It's important to be introduced to other people's holidays. We are impressionable and need to be educated on other people's heritage, culture, and religion.

Other holidays and religions should be more normalized. Sure some shows mention it, but it always seems to be the token friend explaining their heritage and then becoming irrelevant, for the rest of the show.

If you aren't careful you may be ignorant to things in a culture and come off as insensitive or disrespectful. I'll never forget when I was in grade school someone accused me of celebrating a "knock-off Hanukkah" when I said I celebrated Kwanzaa. Kwanzaa is a holiday that pertains to African culture and heritage, it has nothing to do with religion.

Our candle holder is called a Kinara, not a Menorah. We go for seven days, not eight. One is at the beginning of the month and one is at the end.

My roommate celebrates Hanukkah and Christmas while I celebrate Christmas and Kwanzaa. We both enjoy learning about each other's cultures and we reminisced on shows that educated us. In honor of Hanukkah and Kwanzaa, here are shows and movies that talk about more than just Christmas.

The proud Family was a show that followed the teenage years of Penny Proud. In their Kwanzaa episode they spoke about how the holidays are more than just receiving gifts. It's about spending time with the ones you love and giving back to the community.

Now I personally never watched the O.C, but it followed a Jewish family. And there was a yearly Chrismukkah episode created for those (like my roommate) who celebrate both.

Now Rugrats is a double hitter when it comes to educating the youth. I actually have the Kwanzaa episode on VHS still, it was one of my favorite episodes to watch. In the Kwanzaa episode we learn more about Susie Carmichael and her family. The Rugrats are at her aunt's house learning more about black history. Rugrats also had two Jewish specials, one about Passover and one about Hanukkah. Tommy Pickles, our main baby learns more about his Jewish identity by the stories his grandparents tell. Above is a Video from Rugrats Kwanzaa and Below is a video of Rugrats Hanukkah.

The one's I mentioned above are my favorites, but there are other shows that touch on these holidays. The Nanny, The Goldbergs, and The Even Stevens all have episodes about Hanukkah. If you're looking for episodes about Kwanzaa, you could watch Futurama, Everybody Hates Chris, and even Elmo's World.

This is coming from me, as well as my friends who feel the same. Whether they are black or Jewish doesn't matter. What matters is this holiday season everyone should be more open-minded to other cultures and groups of people.

There are so many other holidays that are celebrated this month but are less acknowledged because they don't happen in America. Take time this holiday to give back and learn more about a culture that isn't your own.

Madison Franz
The Narrative
1115352
Photo by Brooke Cagle on Unsplash

Madison Franz
The Narrative
653311
Photo by Manny Moreno on Unsplash