Weird Fiction Is The New Black 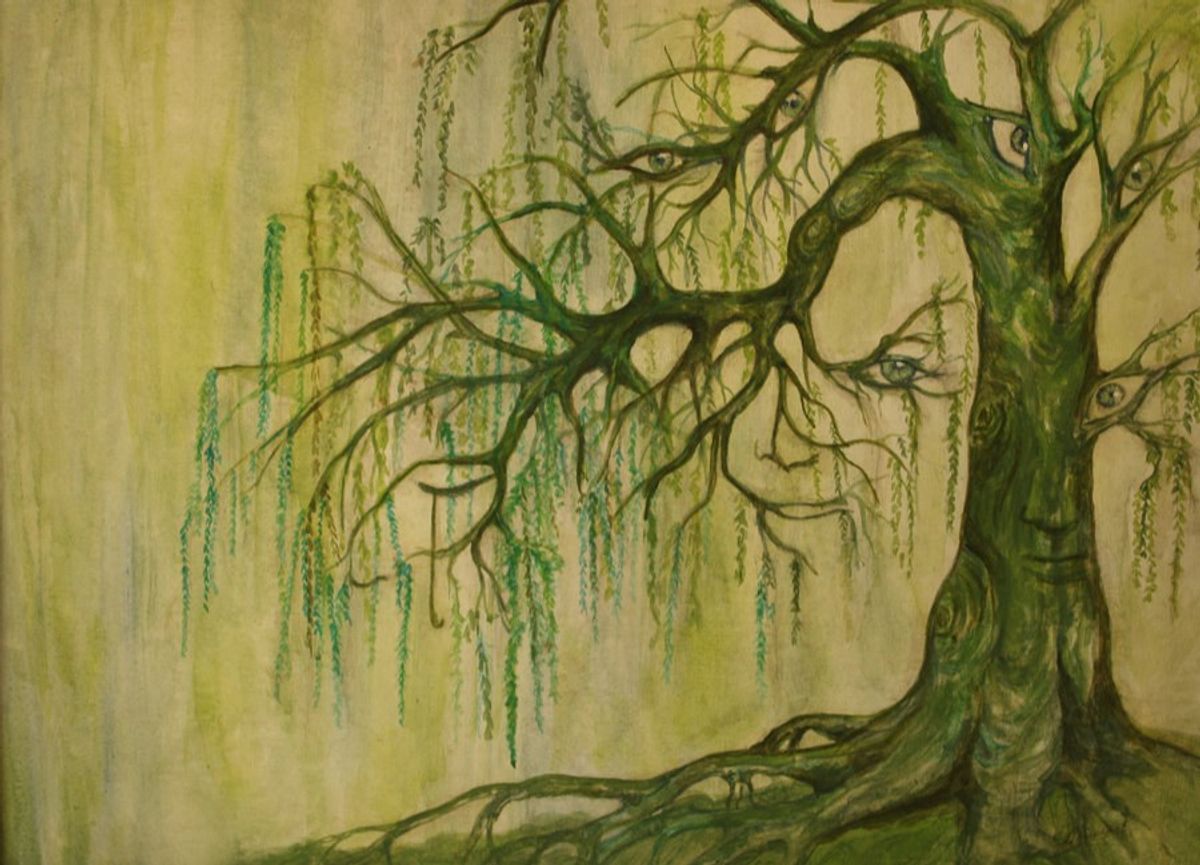 Any avid reader is familiar with the classic gothic tale of ghosts and haunted mansions, but beyond the barriers of traditional ghost lore is something far greater and ultimately, weirder. H.P. Lovecraft, an icon in the realm of Weird Fiction in 1927 stated, “The weird tale has something more than secret murder, bloody bones, or a sheeted form clanking chains” (The Weird: An Introduction, 13). Weird Fiction goes beyond traditional limits and represents the intrusion of the supernatural worlds into the natural realm. The Weird is a literary genre astray from the classic ghost story that incorporates a supernatural feature. Algernon Blackwood’s The Willows is a prime example of Weird Fiction because Blackwood does not have to utilize the classic image of a knife-wielding murderer to tap into fear. By moving from the classic haunted house scene to the eerie shores of the Danube River and into the uncanny grasps of the willows, Blackwood wholly captures the essence of the weird.

Blackwood’s The Willows takes place in what is typically seen as a beautiful setting, the Danube River. The narrator of the short story states in complete awe, “I stood there for several minutes, watching the impetuous crimson flood bearing down with a shouting roar, dashing in waves against the bank as though to sweep it bodily away, and then swirling by in two foaming streams on either side” (The Willows, 3). Blackwood initially describes the Danube as something utterly beautiful, something that demanded respect of its multitude but nonetheless, stunning. As the tale of the narrator and the Swede progresses, what was once perceived as beautiful takes on an eerie and horrifying shadow. In order to completely convey the aspects of Weird Fiction, Blackwood creates a canopy of breathlessness and unexplainable dread and smothers the narrator and his counterpart under it as the story advances. After the feeling of fear had been introduced Blackwood begins to disclose the fascinating mystery of the willows, “All round the tent and about the fireplace where we had seen the moving shadows there were deep funnel-shaped hollows in the sand, exactly similar to the ones we had already found over the island, only far bigger and deeper, and beautifully formed” (The Willows, 12). Although Blackwood continues to describe the features of the island as ‘beautifully formed’, these qualities take on an undeniable, supernatural aspect of the unknown. Through Blackwood’s short story he conveys a malign and meticulous deferment or complete downfall of set laws of nature. Blackwood soon makes the supernatural essence suffocating to the narrator and the Swede, ultimately overpowering them with the fear of the unknown, “‘Now listen,’ he said. ‘The only thing for us to do is to go on as though nothing had happened, follow our usual habits, go to bed, and so forth; pretend we feel nothing and notice nothing. It is a question wholly of the mind, and the less we think about them the better our chance to escape. Above all, don’t think, for what you think happens” (The Willows, 14). Blackwood so efficiently instills fear into the narrator and the Swede that they assumed their very own minds were not safe from the unknown power of the willows. By taking the traditional ghost story out of the overdone scene of the haunted mansion and relocating it to the seemingly beautiful Danube, Blackwood successfully achieves the characteristics of Weird Fiction.

Within Blackwood’s short story, the menacing willows are of constant speculation. Throughout the entire story Blackwood is in a persistent state of personification, giving life to the waters, sun, and most importantly the willows. The willows are described as dense and erratic, not even deserving of the title ‘tree’. Blackwood states, “And, apart quite from the elements, the willows connected themselves subtly with my malaise, attacking the mind insidiously somehow by reason of their vast numbers, and contriving in some way or other to represent to the imagination a new and mighty power, a power, moreover, not altogether friendly to us” (The Willows, 9). At certain points in the story the willows seem horrifying and supernatural, they send the Swede and the narrator on an unearthly experience, but at other occasions they take on a preternatural and divine ambiance. The willows ultimately never gain the formality of trees; they are without a trunk and are merely modest curved bushes, although minuscule they evoke an unearthly fear into The Willows like nothing else could. ‘The Weird’ can be extremely metamorphic; it has the ability to produce monsters out of something that has never before been seen as monstrous. The Weird begs its readers to try to understand although it is incomprehensible, and recognizes the inescapable failure as a sign of our intellectual limitations as meager humans.

By taking his readers beyond the cliché haunted house of the traditional ghost story and submitting his readers to the seemingly beautiful Danube and the mystical grasps of the willows, Blackwood wholly captures the essence of ‘The Weird’. Throughout The Willows, Blackwood does not have to produce the classic monster character to induce fear into his readers. He does something much more challenging and takes something that is seemingly beautiful like the Danube River or willow trees and puts an uncanny supernatural twist upon it. Which ultimately creates a canopy of horror that covers Blackwood’s story from beginning to end. Weird Fiction is a genre of literature that is constantly pushing the limits of reality and the intellect of its readers. By begging his readers to comprehend something that is conclusively out of their grasp, Blackwood distinctly conveys the characteristics of Weird Fiction.