The Goals Of Arizona's W.E. Rising Project And How 'Defunding' The Police Could Combat Inequality

The W.E. Rising Project is advocating change for the Phoenix, AZ area — and argues defunding the police is a step that could help. 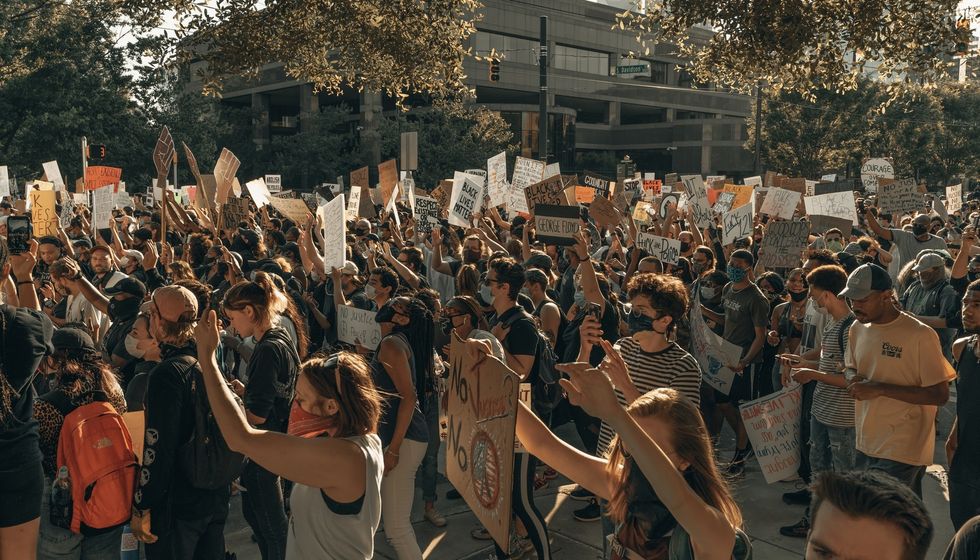 The W.E. Rising Project is a movement that stands against police brutality and racial inequality in Phoenix.

The project met on September 24 for a candlelight vigil for Breonna Taylor and Dian Johnson. The vigil was in downtown Phoenix, AZ, where attendees decided on the project's next goal: voter initiative.

Jacob Raiford, director of communications for The W.E. Rising Project, mentions how a movement needs to have a cause, a sort of ending. For the project, it is legislative change.

"We can't just tell people that we are upset and expect them to do something about it," Raiford said.

When the W.E. Rising Project was created, around June, the organization didn't wait to take action. It began protesting at the Arizona Unity March, where protestors marched to the Arizona capitol in early June. This march lasted approximately 16 days and had a crowd of roughly 1,000 people, according to AZ Central.

The COVID-19 pandemic didn't stop The W.E. Rising Project attendance at any of the protests. The pandemic might have helped increase the number of people and motivation for this change. According to Raiford, attendance is growing, with up to 10,000–12,000 people attending some protests.

When the organization creates events, it makes sure to create safety measures. The project enforces masks and sets up stations with electrolytes, water, snacks, and hand sanitizer.

"It's almost parental to look after the people that attend the events," Raiford said.

The W.E. Rising Project marches and protests have been effective in the organization's movement to get information out to the greater Phoenix area. Raiford says that this movement came together at a point in time when the communities are being hung and stood over.

When Governor Ducey initiated lockdown and emergency procedures, Black Lives Matter Phoenix Metro and other organizations began to speak up about equality and police brutality issues. The organizations and communities were able to take negative events and channel energy towards helping highlight these issues. Raiford mentions that there are cases of racism within the criminal justice system that all tie together the greater issues of systematic prejudice against the black and brown community.

W.E. Rising Project CEO Jazlyn Geiger went to one of the first protests in Phoenix that gathered for the death of George Floyd on May 28. Since that day, she has helped build The W.E. Rising Project and has gone to over 60 protests.

At first, the W.E. Rising Project decided that the "W.E" in their name should stand for "with everyone," because the idea was that they are here for everyone and the whole community. Then the group changed it to "with equity." The group came upon this decision because equality is talked about all the time, but people don't talk about equity enough.

The organization is created with the majority of younger people that all had the same passion, thoughts, and beliefs. They formed together during a hard time and set a goal to bring something new to the communities.

Thousands of people show up to The W.E. Rising Project events, either like-minded or willing to learn something. The organization comes together to fight for what they believe in and create strategies to make a change.

"At the end of the day," Raiford said, "protest, without any endgame, is just performing."

At the March of Arizona, organizer Kenneth Smith spoke about changes the organizations wanted to see. According to AZ Central, they wanted to see diverting funds from the police.

Raiford says that there is too much money being allocated towards the militarization of a force that is supposed to be protecting its citizens. He explains that the excessive amount of money should be allocated towards communities that need financial reinforcement.

"When it comes to distributing money for the police, there should be redistribution in certain areas to help the police in a better way," Geiger said.

In the first half of 2020, $3.4 million has been spent on military equipment in Arizona, according to an Arizona Mirror analysis.

According to AZ Central, protestors gathered around the Phoenix City chambers for a council meeting on June 3.

The protestors demanded to defund the police by 25% and put the money towards programs that will help the community. The council members denied this request.

According to AZ Central, the decision was made for $400,000 to be used for the Office of Accountability and Transparency, which is said to enhance civilian oversight of the Phoenix Police Department.

"There's no reason why that money should be funneled in areas that could be used towards helping the community," Rainford said.

For Those Who Think The Pandemic Is Over, America Just Broke Its Single-Day Record Of COVID Cases

There have been over 220,000 deaths in the United States alone due to the virus.

"They're children of God and have a right to a family." — Pope Francis

In a new documentary, "Francesco," which centered around Pope Francis, the Pope comes out in support of same-sex civil unions.

Here's a simple and easy template you can use to help you write your piece.

Are you going to be a first-time voter this year? We would love to hear about your experience voting.

Delays in absentee ballots have made left Ohioans unsure when or if they're going to receive their ballots.

Like over a million Ohioans, I requested an absentee ballot for the November election. And like thousands of Ohioans, I don't know when — or if — I'll get that ballot.

No one is out here attacking the male condom, so leave birth control pills and other contraceptive methods that prevent pregnancy alone.

Forget politics or religion, this is legitimate healthcare, this is sexual health education, this is freedom.

It will only get worse.

Encountering homeless individuals while going to class or getting groceries is not a rare occurrence here in Honolulu, Hawaii. In fact, it would be rarer to experience the latter. I have personally never left the bubble of campus and not had a notable encounter with at least one homeless person during that given trip.

Judge Amy Coney Barrett used a term that many feel implies sexuality is a choice.

When Supreme Court Justice Ruth Bader Ginsburg passed away in September, we lost a remarkable woman who was at the forefront of progressive values. She not only stood up for women, but she supported the LGBTQ community. RBG was the first Supreme Court member to officiate a same-sex marriage ceremony. Her backing the LGBTQ community meant so much to us. It helped push us towards the progress we see today.

Being A Rape Survivor Does Not Define Me, But 26 Assault Allegations Should Define Donald Trump

Don't Be Fooled By Mike Pence, He's The Same As Trump — But With An Indoor Voice

Tell Us Everything Your University Is Doing To Handle COVID-19