60 Thoughts I Had While Watching "Beauty and the Beast: The Enchanted Christmas"
Odyssey

60 Thoughts I Had While Watching "Beauty and the Beast: The Enchanted Christmas"

And what a glorious 72 minutes it was! 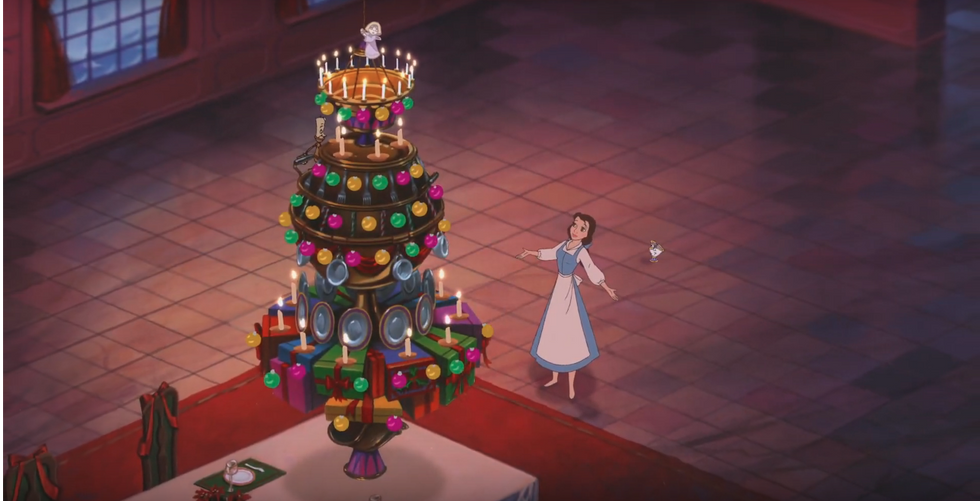 I live and breathe everything Disney. Well, almost everything—I've never been one for watching the direct-to-home-video Disney sequels. But I wanted to watch something new this holiday season, so I got my hands on a copy of "Beauty and the Beast: The Enchanted Christmas" and popped it into the DVD player

If you've never heard of it, it's supposed to take place sometime during the week (it was a week, right?) that Belle spent in the Beast's castle, where he had declared his own war on Christmas. In other words, Disney attempted to wedge Christmas into the story of "Beauty and the Beast" with a holiday midquel. Makes sense, I guess.

Here are 60 thoughts I had during the film's 72-minute runtime. Spoilers ahead.

1. A cinematic treat like this definitely deserves to be introduced with fanfare!

2. I hear singing, but that man's mouth doesn't move? Am I supposed to assume he's the only one not singing?

4. Is Mrs. Potts supposed to be Chip's mom? Or grandmother? I'm confused...

5. I have suddenly realized that adulthood has fully sunk into me—I can no longer relate to kids who groan about getting socks for Christmas…

6. I mean, socks are expensive!

9. And why doesn't Mrs. Potts have a first name?! This needs to be addressed STAT.

10. Also, I'm snickering about the fact that she's going around pouring tea for everyone. If I was her, I wouldn't even touch another teapot with a ten-foot pole for as long as I live on this Earth. But watch as she does it without a care in the world...

11. "Such a kind soul!" "And her looks don't hurt either!" Okay Lumiere and Mrs. Potts, but please praise Belle for her intelligence at some point, k thanks…

14. It's Christmas Eve, and our heroine survived a wolf attack! What time to be alive, right Belle?

15. Beast alludes to the fact that he fell on his rump, but covers his front with his cape?

18. But look at the (former) Disney sequel factory trying to be cutting-edge by wedging computer animation in a traditionally animated film. That's cute.

19. OMG but the computer animated organ villain is Tim Curry! Which means this movie instantly got 1000x better! 🤩

20. Find me a magical sheet notes printer like that, wrap it up, and give it to me for Christmas! #please

21. Ahhh, HERE'S the moment I've been waiting for!

22. "Before the enchantment, there was no need for my particular brand of genius, but now the master needs my melodies to feed his tormented soul." OKAYYYY, so we know right off the bat that he's a total sociopath! GOT IT.

25. Loving the Disney references in this musical number about stories!

27. "Look at us, squabbling and bickering, breaks my heart to see it, it does. And we used to be at our very best at Christmas." PREACH IT ANGELA LANSBURY!

28. Where can I get me some enchanted decorations? Decorating for Christmas is exhausting…

29. OMG Fife giggles like the Pillsbury Doughboy! I can't even.

30. Getting some Dudley Dursley vibes during the Beast's flashback moment!

32. Wait, so the curse caused little Chip to be stuck in development? Like, if he was seven when the curse started, he won't grow past seven until it's over? (These are the things I think about...)

33. In a movie about Christmas, they threw in a token Jewish character! Add him to the (sadly, very short) list of Jewish Disney characters!

34. Belle gives the Beast the type of playful, coy look I gave my boyfriend when I begged him to take me the "Rosè Mansion" in New York.

35. OOOOOOH BELLE JUST CLAPPED BACK AT THE BEAST IN A MAJOR WAY! #yaaasgirl

36. Aaaaaand with that, he just set himself back like, TEN MILES, in trying to break the curse. BRUH.

37. New Years' Resolution for 2019: be as brave and daring as Belle going to the West Wing a SECOND time.

38. OMG WAS THAT THE CHARLIE BROWN TREE? Stop.

40. Dear god, please don't tell me they wrote her to be foolish enough to go into those wolf-infested woods A SECOND TIME? 🤦♀️

42. Maestro Forte's song is such a mood.

44. Don't worry Belle, a candle and a clock are coming to your rescue! You're saved!

45. And how convenient is it that she could save herself when the pieces of thin ice connect like puzzle pieces!

46. Beast launches out of the water in slow-motion as if he was a lifeguard on "Baywatch" and I'M DEAD.

47. WHAT the Beast actually throws Belle in the dungeon?!?! How can ANY perfectly sane woman fall in love with him after that????? WHAT?!?!

48. Maestro Forte is like the voice of self-doubt inside our heads...

49. In real life, Belle would've died of hypothermia by now because he locked her up in that nasty cold dungeon. But instead, she's singing and dancing...

51. Loving that they also wrote Belle's storybook in French during the animation process! (I'm totally not crying right now.)

52. At least, I HOPE it's her story written correctly in French. I might try translating it later…

53. When her Bae comes in with an apologetic look on his face, but Belle has every right to be like "OH HELL NAWWWWW!" #boybye

55. But in case you thought everything was resolved, the sociopathic computer animated organ villain is out for blood!

56. "THEY CAN'T FALL IN LOVE IF THEY'RE DEAD!" This is so ridiculous to the point that it's actually impressive.

57. Oh wait it got better—Maestro Forte attacks the Beast with his music like laser beams! YUP, THAT HAPPENED.

59. At least Belle got the credit for saving Christmas. And it's over. That was...SOMETHING alright...

60. It was fun, but can we all agree this should join the "Star Wars Holiday Special" and NOT be canon?

What are your thoughts on "Beauty and the Beast: The Enchanted Christmas"? Tweet me at @missjulia1207!