You Shouldn't Need A Celebrity To Convince You To Vote

You Shouldn't Need A Celebrity To Convince You To Vote

The fact that you have the right to should be reason enough. 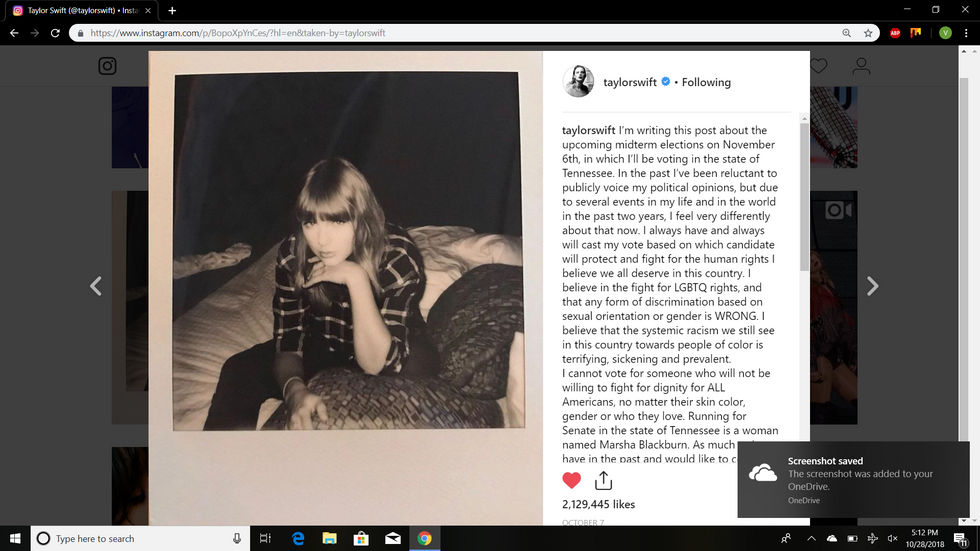 Every election cycle Twitter and Instagram feeds are flooded with celebrities encouraging their millions of American followers to vote. Cute posts with I VOTED stickers and inspiring captions tell Americans young and old that voting is the way to voice their opinions and make a change in their government.

Those posts aren't wrong by any means. Voting is an American ideal related closely to the ideals of free speech and expression. Voting also determines the outcome of elections, which in turn determines the political direction the country will go in for the next few years.

So, yes, every American should vote.

But you shouldn't need a celebrity to tell you that.

All of the basic information on voting- how it impacts you, how it works, when and where you can do it- should be taught to you in civics long before you reach the age of 18. If that information was never taught to you, you most likely can find it relatively easily online.

Besides that, there is another reason why we shouldn't need celebrities to tell us to vote. Why do we feel the need to listen to celebrities so often? Why do their Twitter and Instagram posts serve as the life-blood of so many people's actions and decisions?

It seems as though we all cling to the messages and directives issued by our favorite celebrities as if they are the only way to live.

When the topic of the post is voting, this isn't really an obvious issue.

We all should vote. We all should be informed and educated on the issues, candidates, and parties we are all voting on and for. So when a famous singer (or actor or dancer or whatever some celebrities do) tells their often young fans to vote, the media and public flock to heap praise on to that person.

Look at them, we say: they are using their platform for good. They will encourage so many young people to hit the polls.

This is usually followed by an uptick in voter registration and, again, more praise for the poster. It is hard to argue the benefit that comes with an upswing in the amount of registered voters, so people latch on to the praise and hail celebrities as brilliant and brave for their posts about something every American should already view as important.

Celebrities are people too, of course, and absolutely have the right to post whatever they want. I'm not complaining about celebrity posts as much as I am questioning why it takes a celebrity's post to get people to vote.

Bottom line: whether a celebrity tells you to go and carry out your civic duty and right as an American, you should do it.

Find your polling place and learn about early voting from nextgen America here.