I dyed my hair for the first time. 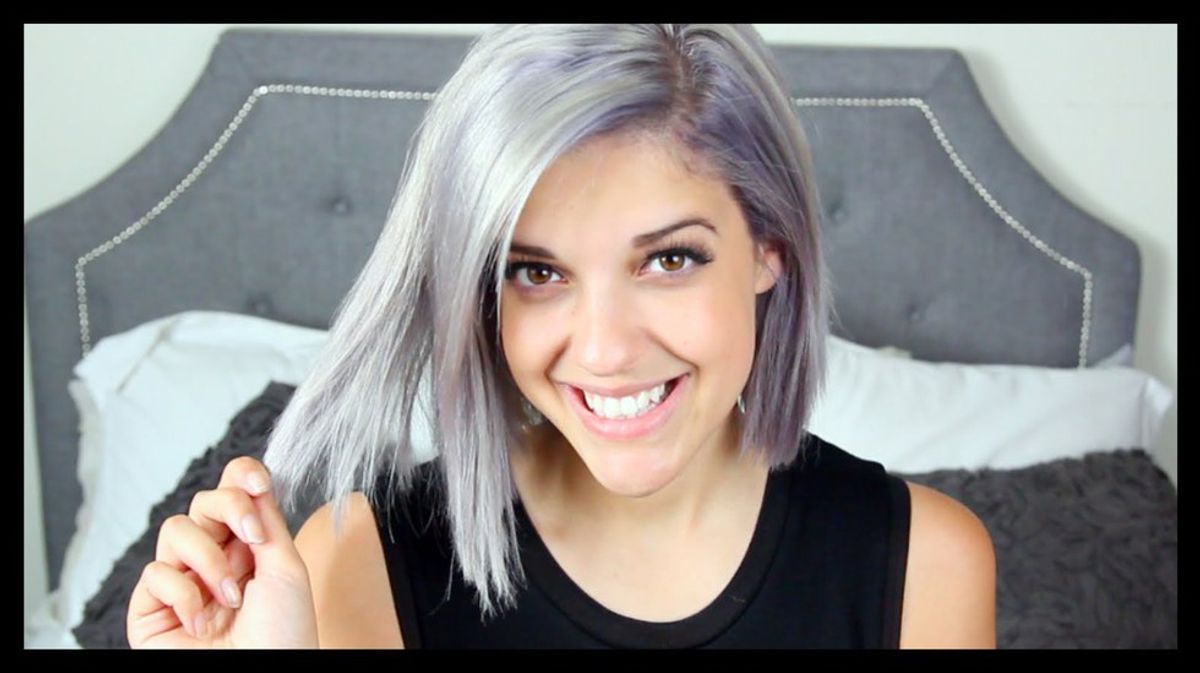 I've never been an incredibly adventurous person when it comes to physical properties, such as looks, until recently. I had the same waist-length hair for the first seventeen years of my life and never did anything different. It was a ponytail every day. Literally. I never did anything else with it. I'd never planned, or even remotely considered that my hair would be how it is today. I'm currently sporting a short pixie cut that, as of today, is no longer blonde but silver and purple. Quite the change, right?

I cut my hair a little over a year ago. I went from over two feet of hair to a little more than two inches and it was one of the best decisions of my life. I don't regret it at all. But that's a story for another time. I'd never really in my wildest dreams for most of my life thought I'd end up dyeing it as well.

Today was the first time color has touched my hair. I had been thinking about it, but I'd never actually considered doing it. Well, obviously I did and it turned out to be quite the experience.

My aunt is a cosmetologist and she's the only person I go to for my hair. It's easiest and I like what she does with it. She'll also be honest with me about how things look and what I should do. When I told her I wanted to do this she got excited and started looking at different kinds of grey and silver.

I was quite nervous as I walked into the salon. I'd never even seen anyone get their hair dyed before so I had no idea what I was in for. The only thing I was told was to be prepared for itching. I wasn't, but now I know.

My aunt sat me down and showed me the colors that we were gonna do and I honestly was feeling okay with it. I started feeling less okay a bit later when we started to actually bleach it. Bleaching is not fun. At all. Luckily, since I'm a very light colored blonde, we didn't have to do too much bleaching, but the small amount we did was certainly enough for me. It's very, very itchy and a bit tingly. It's just odd.

As I sat under the blow dryer, the bowl shaped one, I had to try my hardest now to scratch and tried to distract myself by reading part of Mostly Void, Partially Stars by Joseph Fink and Jeffery Cranor, but it was to no avail for a little while as I couldn't focus on the words at first. Eventually it settled down and I could read but it was really not fun.

After we washed out my hair I looked like Draco Malfoy in the first Harry Potter movie. It was...bad. Very bad. I now know that I was not meant to be platinum blonde. Nope. Nein. I was not feeling good about any of this anymore and regret was quickly making it's way into my mind.

Once she began applying the color I felt a bit better. To be honest I didn't even know what she aws doing at first because I was facing away form the mirror (and texting, but that's beside the point) and I didn't know that you could squeeze the dye out of a tube thing. I had no idea how that worked at all. I'd never even seen anyone get their hair dyed before, so I was lost.

But, yeah, I was feeling better as the color began to set in. The Malfoy look was done away with, thank heavens, but I was still unsure. It had come out more purple than we had intended. It was still wet and unstyled at this point. I still wasn't feeling good. Not as bad as before, but still not good.

Then came the blow dryer. As we dried and combed it into my usual style I began to feel loads better. It actually looked really good! (Well, I think it looked really good if no one else did). My aunt cut it a bit since I'd needed a hair cut and that was the end of it.

In complete honesty I now look like a pixie of some sort. It's a cute look and I don't regret it entirely. Yet, at least. I hope I won't later either. It was quite the adventure. I don't know if I'll ever dye my hair again after this, but I feel like it was a good experience to have and I'm glad I did it, even if all I get from it is just saying that I've done it

Now, let's just hope that when the grey fades I don't end up with the Malfoy look again. I mean, come on, I'm a Gryffindor after all.