Trump made it clear at the G7 and Singapore summits what kind of leader he adores. 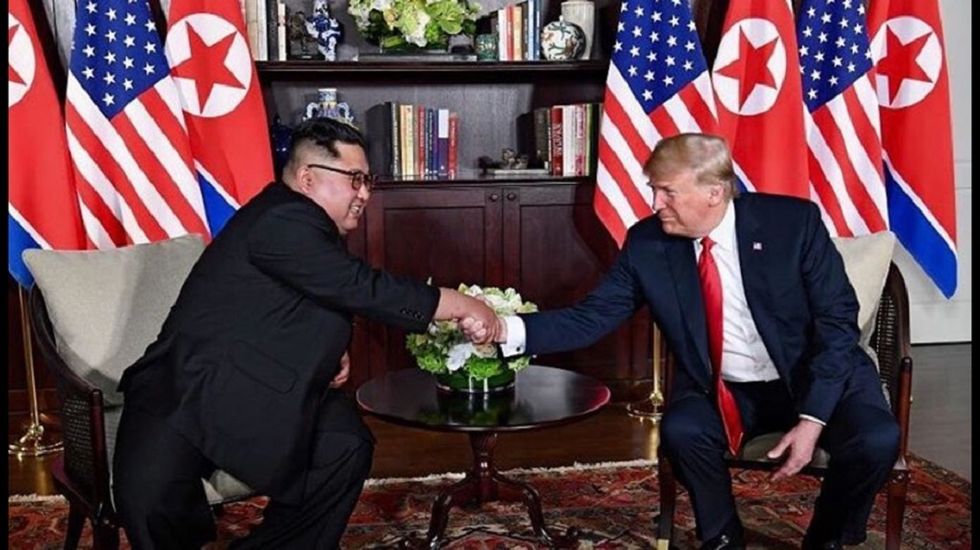 Donald Trump had a busy week away from the golf course attending two important summits with two different kinds of leaders.

The first was the G7 Summit in Quebec, Canada. This summit included other democratic countries like Germany, Canada, France, Italy, Japan and the United Kingdom. Then, just a few days later, Trump met with North Korean dictator Kim Jong-Un at a summit in Singapore.

At the G7, Trump did his best to do exactly what Vladimir Putin wants him to do: undermine The United States' standing on the world stage as well as the democracies of the European Union. After all, Putin does so himself with election interference in not just the United States but other European countries as well. If it weren't obvious that Trump isn't beholden to Putin, listen to Donald's own words. "Now, I love our country. I have been Russia's worst nightmare," Trump said. "But with that being said, Russia should be in this meeting. Why are we having a meeting without Russia being in the meeting?" Also at the G7 summit, Trump tweeted his frustrations with Canada, one of America's strongest allies. He called Justin Trudeau "meek and mild" and "very dishonest & weak." Then, Trump threatened to escalate a trade war that he started.

At the Singapore summit with North Korea, there was less of a tense feeling like there was at the G7 in Canada. In fact, Trump showed a lot of adoration for Kim Jong-Un, a man known for starving his own citizens and practically holding them as prisoners. This isn't a real surprise considering Trump has spent over two years praising dictators and authoritarian leaders. Then he picks fights with democratic leaders and starts trade wars with allies.

When Xi Jinping essentially consolidated power in China by eliminating term limits for presidents, and Trump said America should try that one day. President Rodrigo Duterte of the Philippines sentences convicted drug dealers to death, and Trump said that he is a strong leader for that, and he since has visited Trump at the White House. Vladimir Putin and the Russian government were responsible for the meddling and hacking of the 2016 elections, according to reports by U.S. intelligence communities. Recep Erdogan is the leader of Turkey, the country that puts more journalists in jail than any other country, and has received praise from Trump. All of that has led up to Trump's meeting with Kim Jong-Un, leader of one of the most oppressive regimes of all time.

When asked about Kim Jong-Un, Trump said, "He's a tough guy. When you take over a country—a tough country, tough people—and you take it over from your father, I don't care who you are, what you are, how much of an advantage you have. If you can do that at 27 years old. I mean, that's one in 10,000 that could do that. So he's a very smart guy. He's a great negotiator. But I think we understand each other."When Bret Baier of Fox News said Jong-Un had done bad things, Trump said, "Yeah but so have other people done some really bad things. I could go through a lot of nations where a lot of bad things were done." In a tweet, Trump said, "Chairman Kim has before him the opportunity to be remembered as the leader who ushered in a glorious new era of security & prosperity for his citizens!"

Just a few days before Flag Day, the Trump administration committed the most egregious disrespect of the American flag I've seen in my lifetime. At the summit, the North Korean and American flags were side by side as if the two are equals. North Korea and the United States are not equals by any stretch of the imagination. However, if Trump has his way, America could get a lot closer. North Korea is known for starving its own people, silencing any and all opposition to the regime, and only providing adequate health care to those who can afford it. America cannot remain idle and watch its president do this to the country or else there will be irreparable damage. Thankfully the Constitution and our forefathers prepared for a tyrant like Trump, so maybe America will survive.