Til It Happens To You
Odyssey

Til It Happens To You 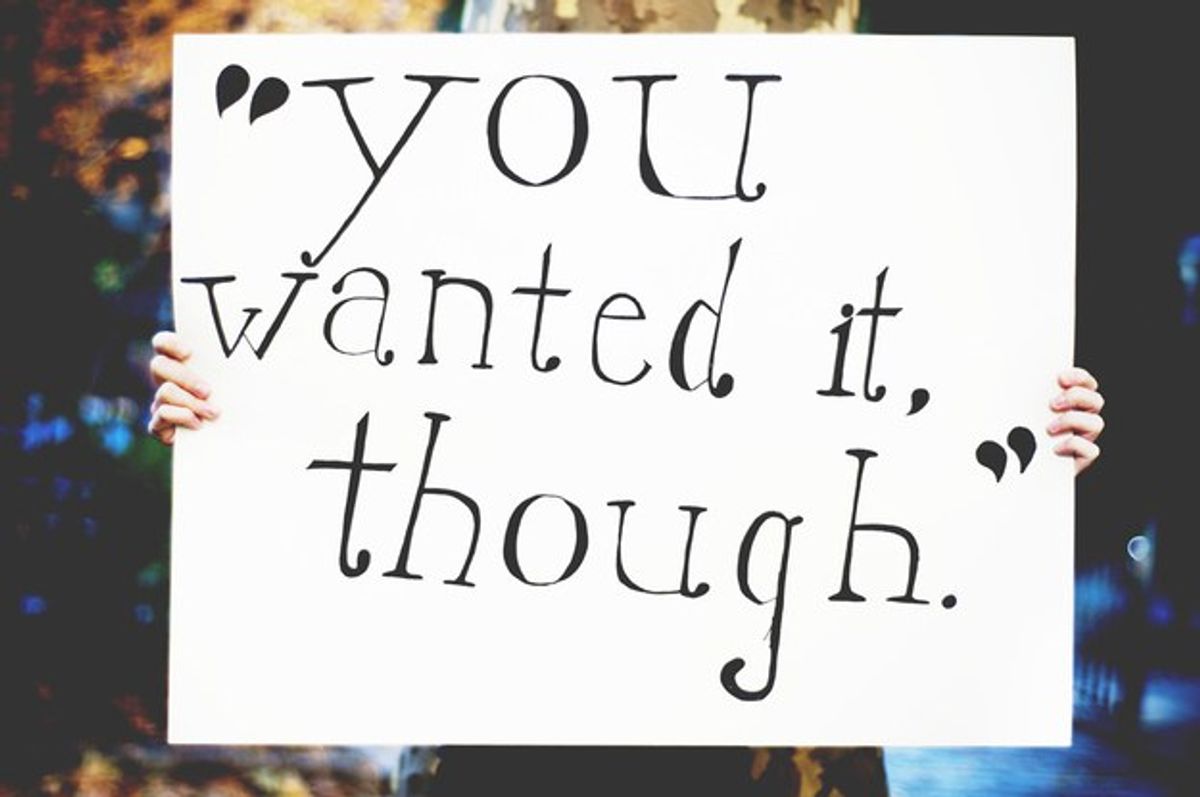 This week, I thought I'd write another fiction story. It was a hard one to write because it deals with sexual assault, but I think it's something that we need to talk about. Most of the dialogue said by the rapist was found on Project Unbreakable - "A photography project aiming to give a voice to survivors of sexual assault, domestic violence, and child abuse, featuring photographs of survivors holding posters with quotes from their abusers."

I would also like to say that if you have been sexually assaulted, please know that it's not your fault. If you would like to seek help, you can find a sexual assault helpline below.

“I love you, Annabelle. You have made me the happiest man in the world, and I want to make you the happiest woman. Will you marry me?” Henry drops down to one knee, his eyes wide and hopeful.

I nod, my mouth breaking out into a wide grin, “Yes,” I whisper, covering my smile with my hands.

Henry breaks out into a grin and wraps his arms around me. He presses a passionate kiss to my lips, moving his left hand to the nape of my neck, and his right hand to the small of my back. With one swift motion, he dips me down and stares lovingly into my eyes.

“Cut!” Our director, Tom, calls from behind the camera, quickly barking out orders to the crew, “Take five everybody. Someone touch up Michael’s makeup. I need more lighting on Sydney when she says ‘Yes’. I need the extras to be less animated. Where’s my coffee?”

The crew buzzes around in a frenzy, each person zooming to be the one that satisfies Tom’s needs first.

I shove Michael off of me, swiping the back of my arm along my chapped lips, the taste of bile rising in my throat just from looking at him, “Get the hell away from me.” I whisper.

He grins evilly, “You know you wanted it, Sydney. Don’t try to deny it.”

Shaking my head, I hurry away from him, my breath coming in short and shallow.

I whip around and jab my pointer finger into his chest, “Don’t you dare, Michael.” I say through clenched teeth.

“Sydney!” Tom shouts from his chair, motioning for me to come over to him, “We need to talk.”

I turn back towards Michael, but his makeup artist is already powdering his greasy forehead. I walk over to Tom, my skin crawling from Michael’s touch.

Tom stands with his hands on his hips, his eyes wide with concern, “I’m not sure what’s going on between you and Michael, but your chemistry is not as electric as it used to be. I casted you two because…”

I try to keep listening, but his voice fades out as I fight off the feeling of Michael’s strong hands tightening around the back of my neck. His words, “I promise you’re going to like this, so stop struggling,” bang around in my head. My inner thigh throbs from his grimy fingers pressing too hard, holding me into the couch as I resisted the kisses that he forced onto my skin.

“Do you want some wine?” I asked, grabbing two glasses from the shelf.

He shook his head, smoothing over his pants, “No, I’d rather just get straight to the scene.”

I nodded, setting the glasses back into the shelf, and joined him on the couch.

“OK, so this is the scene where Henry and Annabelle make love for the first time.” Michael turned towards me, his hand snaking around my waist, “I think we should just get to it. Henry and Annabelle seem like they would be the type of people who like it slow and passionate."

“Yeah.” I breathed out, feeling my face grow redder by the second. I may have been 22, but I was saving myself for marriage. Sex rarely crossed my mind, and I felt my pace quicken as he pressed a hungry kiss against my lips.

“Just go with it, Syd,” he whispered as his mouth made its way up to my ear. I felt my body loosen as the kiss became more passionate. Michael lowered me down into the cushions of the couch, his kisses becoming more aggressive as he reached for the fabric of my underwear.

I jumped, shoving his hand away, “That--That’s not in the script,” I stuttered, clamping my legs shut and straightening my dress.

He shook his head, “C’mon, Syd. This is what Tom would want us to do. It’s our job to explore our characters.”

“I-- I think you should leave,” I whispered, avoiding his gaze and starting for the door.

“But I drove all the way out here for this.” He quickly grabbed my wrist, his grip tightening, preventing me from leaving. He jerked me down onto the couch, my body landing with a thud against his legs. He pinned my wrists down as I struggled to break free. My eyes squeezed shut as he tore my underwear down my legs, unbuttoned his jeans, and thrust himself into my unwanting body.

I tried forcing him off, but he shifted his weight to my middle, forcing me to stay put, “Stop struggling. You’re only hurting yourself.”

He rocked back and forth as I lay there, my body both limp and rigid at the same time.

But it was too late.

He peeled his sweaty body off of mine, stuffing himself back into his jeans, “Don’t bother telling anyone, Syd. Nobody’s going to believe you anyway,” his gruff voice rasped. The loud slam of the trailer door left me staring up at the ceiling in silence.

My body trembled as I stood up from the couch, the lower half of my body searing with pain. I dragged my shaking body to the bathroom to wash his body off of mine. I stripped myself of the clothes he had let me keep on, and stepped into the shower.

I turned the water as hot as it could go, wanting to burn my skin off, wanting to burn his fingerprints off. I scrubbed my skin so hard it burned, but it felt better than having his touch on my body. I felt numb.

The boiling water poured down on my raw skin as I curled up into a ball on the shower floor. The world spun around me, everything blurring together in a fuzzy haze.

“Sydney?” Tom snaps in front of my face, forcing me to come out of the scene that has replayed on a terrifying, constant loop in my mind. I blink, my eyes struggling to focus, the first sign of tears clouding my vision.

“Are you OK?” Tom reaches out to grab my arm, and I instinctively jerk away.

I nod, wiping my cheeks with the back of my hand, “I’m fine,” I whisper, because nobody would believe me if I said any differently.

Kassie Hsu
Baylor University
4137
Panda Whale
Here are 100 things I'd rather to than study. I know the semester just started, but
Featured