A discussion on the themes of the movie, District 9 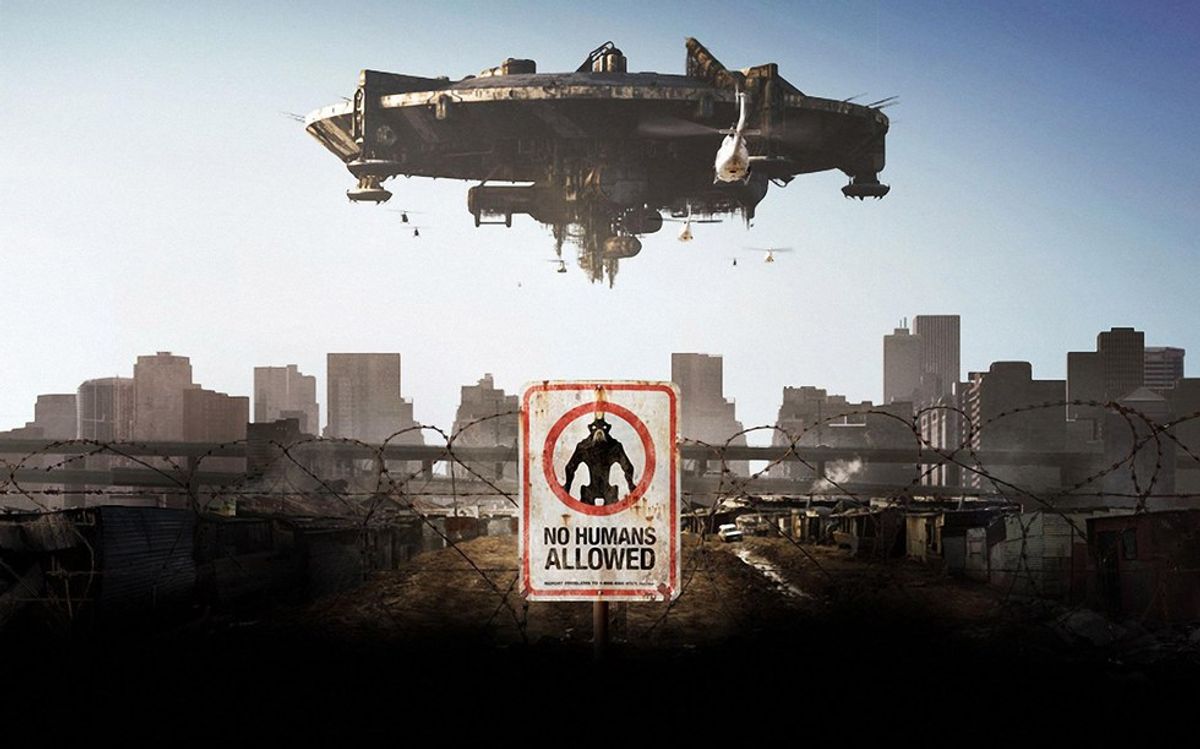 Now before you go judging me on watching an R-rated film, please know that I watched this with Vid-Angel and muted all of the swear words and took out some of the violence. (It was much better). Then for you filmmakers out there, please don't judge me because I decided to watch this film as filtered.

Honestly at first after I finished watching this film I was left with a sick feeling, mainly because of how the human race was portrayed in this film.

This film starts out as a documentary. It describes how an Alien Spaceship suddenly came to a stop right above Johannesburg. At first, the humans were unsure how to deal with it, as nothing really happened once the giant spaceship parked there. Eventually, they decide to break into the ship and they find a bunch of malnourished aliens. They human race decides to take them in, set up a camp for them to help them heal. Eventually, we figure out that this alien race was marooned on earth. During this part, we think that the humans are good. Quite honestly I think this is about what the human race would do had this situation actually happened.

Then things start getting a little weird. It's been twenty some odd years since the aliens started living in District 9. During this time, the humans have learned the alien language, found that the aliens love cat food (at least they acted like they liked it) and the humans have adapted to calling the aliens the derogatory name of "prawns".

To quick sum up the rest of the movie, Wikus, a nerdy guy that works with the Prawns is hired to go tell all of the Prawns that they are being evicted and moved to a new camp. This new camp essentially is a concentration camp. While doing this we get to see the Prawns in their own environment. They have tried to survive, but are treated quite poorly. If they resist at all about being evicted, they are attacked by the military men that accompany Wikus. While Wikus is searching one house, in particular, he finds a strange black liquid that he accidentally spills all over himself.

Later, that liquid causes Wikus's arm to basically fall apart and regenerate into a Prawn - like arm. The EMU discovers this development and they try to force him into testing the Prawns weaponry that was found when the ship was first investigated. The weapons had been unusable by humans due to some strange technology that the Prawns had connecting the weapons to their DNA. Now that Wikus was half Prawn, the weapons worked for him. Wikus is panicking during this experiment, especially when the scientists bring in an actual Prawn for him to test the guns on to see if the guns will actually destroy another Prawn. It works, and Wikus freaks out, breaking free of his cage and escaping the area. He tries to get help from his family but is stopped when a newsreel is broadcasted about him supposedly having "sexual interactions with the Prawns and now has a very contagious STD". His family disowns him.

He crawls his way into the Prawn community since it is the only place he will be safe. During this time he finds a Prawn and his son that he accidentally confiscated the Black liquid from and finds out that is was fuel for them to get back to their mother ship so they could go home. He starts to help them when they give him the promise of fixing him. As he becomes more Prawn-like, he seems to become more human. When he figures out that the Prawn had meant that he would fix him after 3 years, he is devastated and almost runs away, until he decides to save the Prawns from being killed by the military. The two aliens make it back to their ship and in our last scene we see Wikus as a full Prawn, patiently waiting for the Prawns to come back for him.

Okay, that was a long summary, but now hopefully you understand what I want to talk about now. I did a little bit of research on this film and I found that it was actually based on historical events during the time in South Africa when the National Party enforced a "whites only" community. Over 60,000 people were forcibly removed from their homes to go to a segregated community. The movie itself practically mirrors what actually happened.

The word "Prawn" actually comes from the "Parktown Prawn", which is a cricket down in South Africa that is considered a Pest.

Another interesting fact is that if we were to go in and change the dialogue of the movie and everywhere that "Prawn" is said, we were to insert a different name like "jew", "Mexican", "illegals", "Asian" etc, I think we would realize the truth behind the dialogue.


Throughout this movie, we see a theme of racism. The interesting thing is that we see whites and blacks working together against the Prawns. Honestly, I know this world is trying hard to get rid of racism and have equality everywhere but I do think this idea of racism is just going to come up again. Whether it's aliens, robots or any new type of people, I think this cycle of racism will just keep going. It's sad, but it seems like our world never learns.

This movie left me with a sick feeling, wondering if our human race would actually turn into something like this. That we would treat another race so poorly and fail to act "human" toward them.

This then got me thinking about the definition of "human". What does it mean to be human? I've seen so many Sci-fi movies now that I have come to notice that in many of these films, the humans are usually the ones not acting human. I am not saying that I believe the human race has gone to pot, or that we no longer act human, but after seeing the aftermath of this recent election I'm starting to wonder if there are people out there who have lost the right to be what is considered "human".

There have been bad people all throughout history. When did we ever decide that by being kind, merciful or giving meant we were "human". The only person that ever fit the description that we giving "being human" was Christ himself. If we want to be "human" essentially I think we need to be more Christ-like.

Anyway, this is probably enough rambling for me about this movie. Let me know what your thoughts on this movie were!