Anecdotes of Memory: A Tale of Hellenic Culture 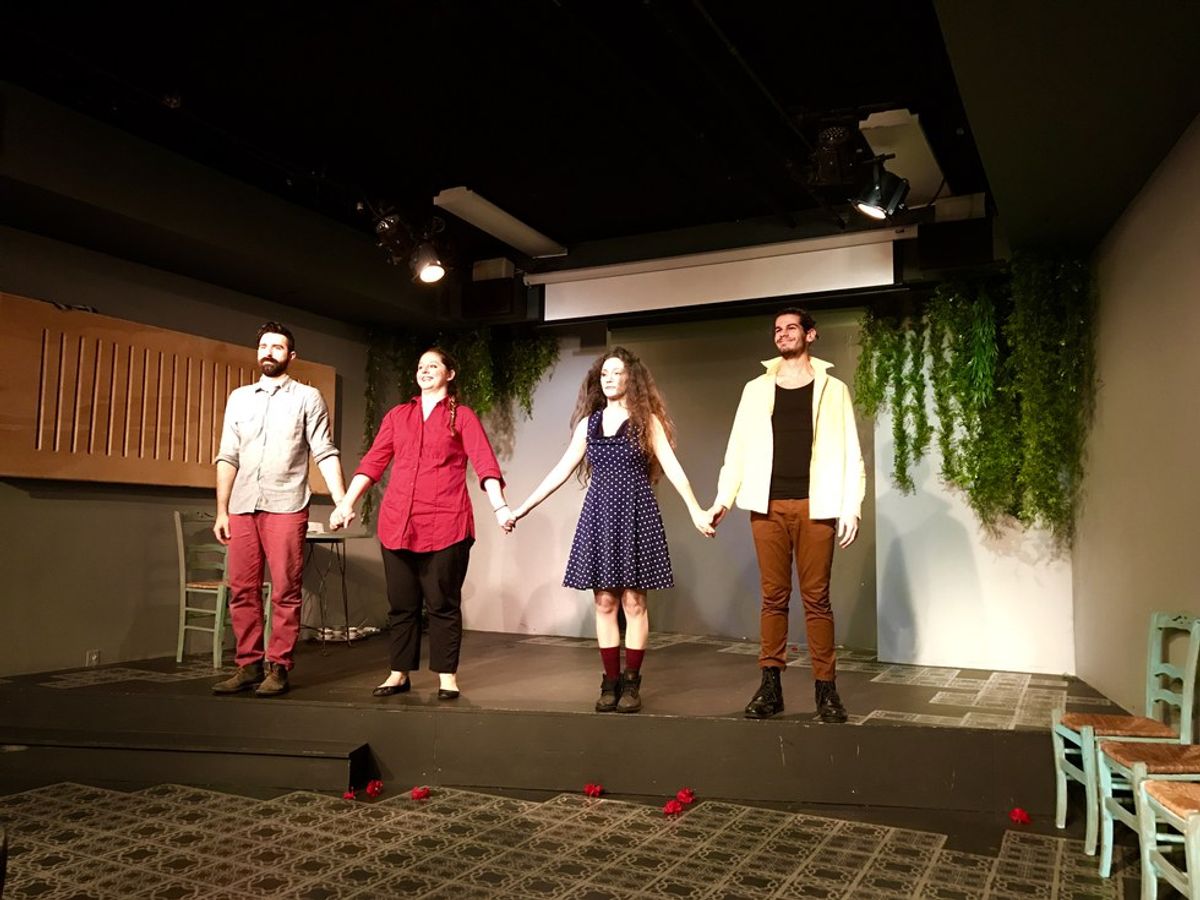 “Sons and Daughters:” Anecdotes of Memory

The temptation is strong, when writing about one’s country and roots, to dwell in what it could have been, but never actually became. The play “Sons and Daughters” as directed elegantly by Lyto Triantafyllidou is a beautiful choro-drama of music, lively narratives, energizing scenes and nostalgic scenery. This is a play, written by Yiannis Kalavrianos and trust me, it is worth seeing more than once.


A socially conscious work, this play is based on the interviews of Greek people, recalling a life-changing story. Call them anecdotes of memory, full of hope and yearning for what the life of these individuals could have been, had it not been for the startling socio-political circumstances of modern Greece that changed their life dramatically. The setting of the play is simple, four chairs and a table, some coffee cups and a beautiful ivy plant on the background wall. Somewhat like a boat, somewhat like a tavern, the setting is ephemeral, but solidified in its cultural significance. There is a projector, with English subtitles. Rather minimalist, it allows for the stories to speak for themselves and for the audience to experience stories of commonality, that all Greeks are familiar with.

To reminisce a phrase by our Greek internationally acclaimed poet Odysseas Elytis, “If you take Greece apart, in the end you will see

remaining to you an olive tree, a vineyard, and a ship. Which means: with just so much you can put her back together.”

Similarly, “Sons and Daughters” reconstructs this simple painting of a country, where the people and their stories is what matters. Their struggle for happiness, love, hope and fulfillment in a crumbling world of uncertainty, betrayal, war, oppression and natural catastrophe. The audience travels with the actors through the great migration, World War Two, the occupation, civil war, the catastrophic Kefalonia earthquake, the rising of the Berlin wall, the junta and Greece in the years of the restoration of democracy.

The actors, Fotis Batzas, Mantalena Papadatou, Nikos Siozos and Alexandra Skendrou impersonate these stories with honesty and artistic mastery. They own the characters and as watching a movie, one reminisces the world of different dances and feels their life passing, like a choro-drama. One gets a glimpse of the Rebetiko dances of the ports and cities, the world of “Zorba The Greek” (1964) and the island naiveté of the “Captain Corelli’s Mantolin” (1994).

One cannot help but remember, Melina Mercouri, Anthony Quinn, Jules Dassin et al, important international figures, that gave us stories to remember and narrated a story of daily people. The music and the haunting voice of actress, Alexandra Skendrou, reminds us of these movie nights, we grew up with. She is the voice of reason, experience, artistic endeavor and the harsh reality that surrounds the life of the individualist. Actress, Matalena Papadatou emanates the innocence and beauty of a young Greek. Her naiveté and lightness, irrespective of the daunting circumstances is a tale of the individual choosing love over the daunting social reality. She follows her lover with loyalty and dedication, never faltering in her choice to give to others. Actor, Fotis Batzas, is the adventurer, a Zorba, even perhaps, an opportunist with an idealist streak for greater freedom and perseverance. A voice of hope in the hopeless. Actor, Nikos Siozos gravitates from a starry eyed man, to an authoritarian figure, giving us a different glimpse of his artistic abilities.

The anecdotes of these actors stand tall. The actors tell us of how the Greek Cultural Center was created. We learn about Dimitri, a killer of a captain of the military that came as a fugitive in the USA, to work for 27 years and build a fortune only to die, before being granted asylum to return back to Greece. We learn about Maria, that followed her man, from America all the way to Greece and back. We learn about young men and women falling in love in the underground bomb shelters, while the city of Thessaloniki is being destroyed (1940). We learn about the earthquake, about art, the love of Plousia for the theatre and her debut in Carnegie Hall. We learn about dance, music, theatre, culture and the art of our ancestors.

This is a memento of a memory, a nostalgic symphony of the beauty of existence no matter the hardships and the socio-political turmoil of a country.

This is the tale of modern Greece: A tale of perseverance, courage and above all, love and passion. Beautifully deconstructed, for your eyes to see and your hearts to feel.

A warm thanks to the Greek Cultural center of Astoria (GCC) in the perpetuation of Greek culture in the Greek American community.

Recommended for: Everybody and anybody, with the only requirement, a sense of humor.