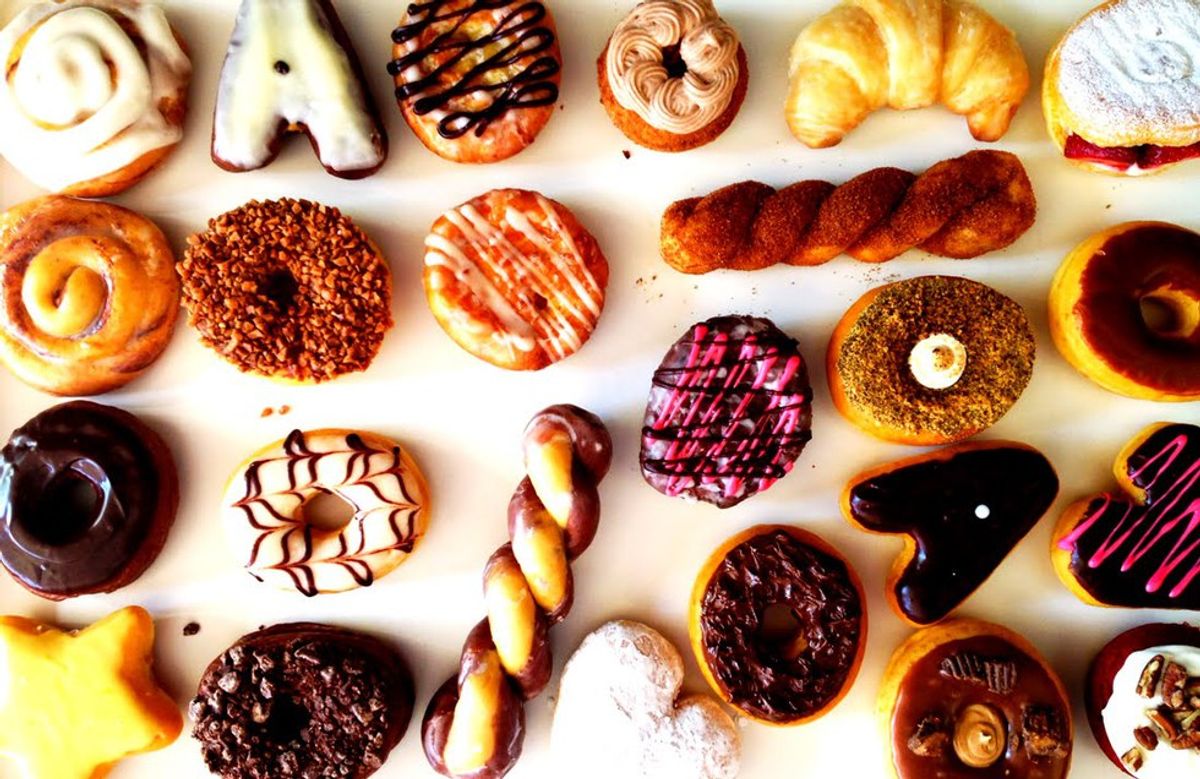 https://www.facebook.com/SarahDonuts/Friends, Romans, ATLiens and devoted doughnut lovers, lend me your ears and rejoice. Below is a list of all the places in A-Town here to sate your sugary cravings. Whether you prefer baked or fried, loaded in toppings or simply glazed, they're the stuff that comprise the pink-frosted fantasies of Homer J. Simpson and Instgrammers alike. And believe me, they're, um- worth the dough.

It'll be hard to resist the vibrant hues of orange pistachio, or the classic Georgia-ness of their sugar-dusted peach slider. You'll definitely want to go ahead and treat yourself to a cup of coffee here, too. Find it in Decatur.

It might seem like such an easy-to-pass-by basic, but Ray's knows how to make a sour cream doughnut. They're also known to throw in a few extra doughnut holes when you buy a box! Find it in Marietta.

Tip Top Donuts in Marietta puts the Dunkin Donuts right next door to shame. Their blueberry fritters and apple fritters are especially popular among the locals.

I probably won't be seeing any real Da Vinci works anytime soon, not on my college kid budget. But I can manage a trip to Alpharetta's Da Vinci Donuts. This shop offers all the basics, plus gourmet flavors like caramel apple, creamsicle, french toast, and pina colada, which are all a work of art in their own right. Feeling artistic yourself? They even have an option where you can design your own!

Bon Glaze's colorful array includes campfire (a toasted s'mores creation, pictured below), key lime, and cotton candy, which features an actual mound of fluffy fairy floss piled atop. Find it in both Buckhead and Brookhaven.

Let's take a moment. And thank the heavens above. For blessing us with a doughnut that might actually be semi-healthy. Semi-healthy, and allllll the way delicious. Go for the cinnamon rolls topped with strawberry, kiwi, raspberry, cashew, and carob. Find it on Atlanta's West End!

Sit down to enjoy not only the retro-yet-refined interior of this experimental shop, but also a classic strawberry or (for the more adventurous) rosewater and almond doughnut. Find it in Marietta.

You can't not get an A-Town cream, but you also can't go particularly wrong with any of these super sweet, super soft confectioneries. Note: their logo is an angel-winged doughnut, which is very fitting, as their open-for-24-hours schedule makes them inevitably heaven-sent. Find Sublime near Ga Tech and in North Druid Hills.

Yes, it's a chain, but there's no way a testament to Atlantian Doughnuts could go without mentioning the iconic 1965-built Krispy Kreme at the corner of Ponce. While not the original location (it's often confused with the shop constructed in 1937 in NC), the electric red "hot" sign and doughnut conveyor belt are just as much a part of Atlanta's bakery scene as any local establishment. Do I even have to tell you what to get? A dozen hot-glazed, please!