The Types Of Guys You Will Meet In College
Odyssey

The Types Of Guys You Will Meet In College

"Yo what's up I'm Brad, I'm in a frat and intern for Vineyard Vines" 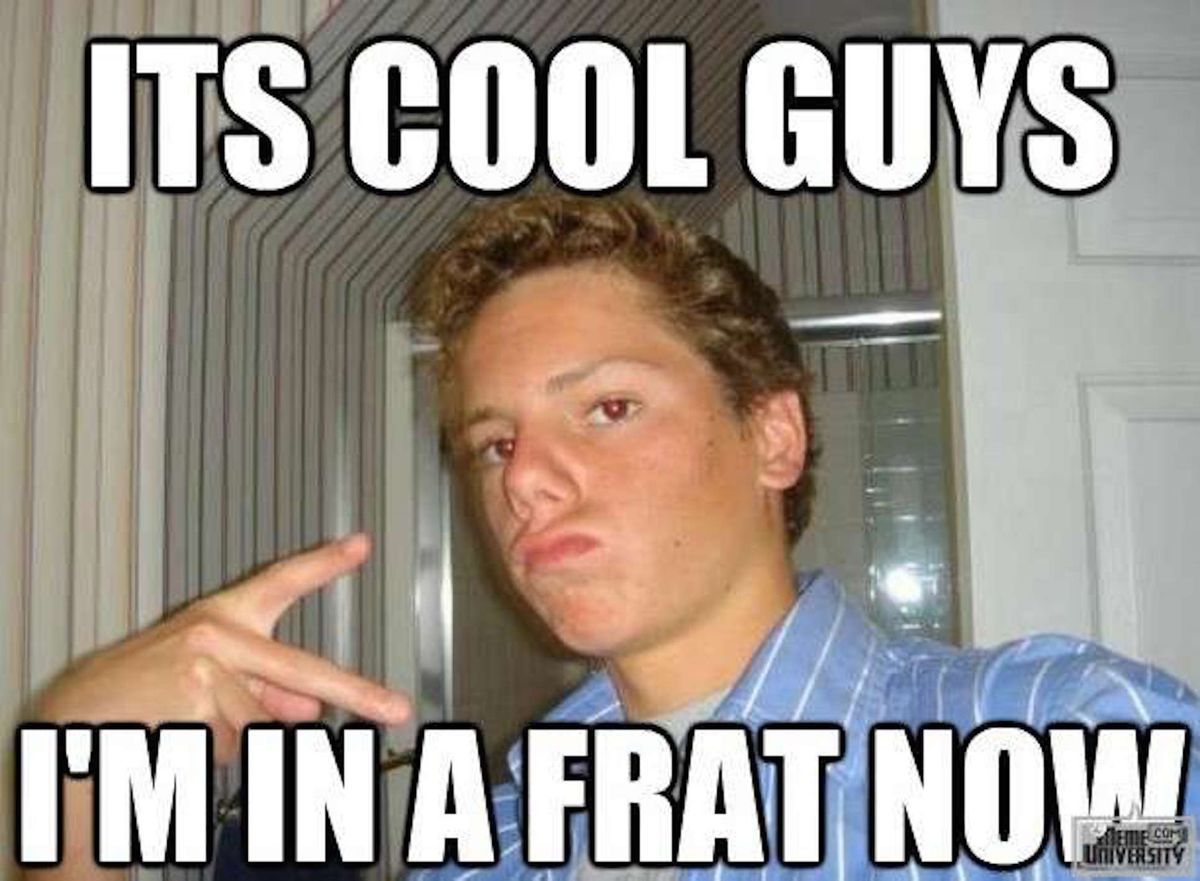 Oh the college life, who doesn’t love it? And what inevitably comes with the college life? B.O.Y.S. (heart eyes). Boys - big, tall, large, small, funny, assholes, you name it - you will meet them. We all get a little hot when we see that D1 player everyone drools over walking past us in the hall, but college guys go far beyond that.

Lets start off with the typical “Netflix and chill” bro who we all probably have encountered our freshman year of college. Late nights roll around, it's like a Wednesday, and you peep your phone. Let's call Netflix and chill guy "Kevin." Kevin adds you on Snap, or you matched on Tinder, whatever floats your boat. He snaps you a pic of his legs in grey sweats and a blurred tv in the background with the caption “Hi." He then proceeds to snap “Netflix and chill?” You may either answer or not answer. If you don’t answer, he will delete your snap, only to add you back after seeing you looking fire flames late night ordering pizza in the dining hall. No Kevin, I wont Netflix and chill with you, and stop getting me excited when I see someone new has added me on snap. Blocked. Oh, and if you did happen to Netflix and chill with this man, when you walk by awkwardly in the hallway, do not expect him to acknowledge you, let alone give you a hello.

Now let’s talk about long, tan and handsome. Everyone wants him, but not everyone can have him. Will you be the lucky bachelor of the week? One can only pray. You purposely wear your Sunday best on a Monday because you know that you and him usually cross paths before you walk into the same 8am and you hope he might just notice you. Fast forward to the weekend, drunk and god only knows what else at his house party, where you approach him with full liquid courage….”Oh my god you’re like totally in my stats class!” And that’s as far as it'll go. You have the typical “OMG STATS CLASS” joke when you cross paths hammered at parties and bars, go run and scream to your friends that you fell in love, and continue this cycle only to see him and his dime of a girlfriend post their first pic on Instagram. RIP to your fantasy with stats guy.

Now I bring up High guy… you see him almost everywhere and anywhere, usually in a graphic tee and eyes half closed. You can smell weed man from almost a mile away and you just wanna vibe with him the minute you walk by. He is normally half asleep in every class and when the teacher calls on him he gives the most insightful answer. You won't see weed guy out, unless he’s bringing drugs to you or your friends. He’s usually half-comatose day in and day out, glued to his couch, staring at Trailer Park Boys with a chicken parm foot-long shoved in his mouth surrounded by smoke.

With weed guy inevitably comes Mr. Jack and Coke. You are on his level once in a while, stumbling down the streets to the next party, screaming shots with each other and shotgunning Four Lokos. Just when you thought you could hang, this guy can hang upside down over a pit of fire and still survive. He is 3 Four Lokos deep, has just funneled Dubra and has been Edward Scissor-handing for the past 30 minutes. He runs around to every girl at the party and tries to sloppily make out with them while tipping over at a 70 degree angle. Everyone loves this guy, up until he pisses all over the wall and knocks over the TV. Hide yo alcohol people, because he WILL steal it. Invite him to the party though cuz he always gets drunk enough to offer everyone a shot of vodka.

I'm going to call this next guy the asshole because that’s exactly what he is. Everyone has experienced or will experience the asshole at some point in their lives, and let me apologize to you in advance. You meet him at a bar, he buys you a drink, tells you you’re the hottest girl in the bar, and next thing you know you wake up butt-naked in his bed. He tells you he “really wish you could stay,” but he has shit to do. You leave, reminisce on the mediocre sex, and return home. You hear back from him, the cycle of subpar nights in his bed after he sneaks you past his housemates continues, and you wonder where this is going. The asshole’s number-one expertise is avoiding the question.” Oh I like you I'm just so busy right now, lets not talk about feelings cuz things get complicated, you are an amazing girl I just don’t want a gf right now.” And the best part? WE BELIEVE IT. So the cycle continues until he slowly does the fade out because he’s found another totally oblivious girl he can shove his @!*& in… Goodbye asshole, thanks for reeling me in, grabbing my heart, and then stomping all over it.

The guy best friend…he is my ultimate fave college boy. Every girl needs a guy best friend. Who else are you going to ask for advice when your being played and have no idea what to do about it? Yes, girls are awesome, but guys are just so drama-free, and it's always nice to have an opinion from the other sex. You wanna know if your bodysuit and jeans look good, just snap your BFF a pic and you're guaranteed to get a response out of it that is brutally honest. It's just so relieving to have a guy figure in your life who can make you feel like you’re for the boys and not have to slap on your entire makeup supply to just go watch TV. And if by chance you are so irresistible that your guy friends fall in love with you, make a story out of it. Everything happens for a reason.

The list goes on and on, you have the frat bro who daps up all his brothers as he walks down the hall, the painfully shy guy who hasn’t made eye contact with a single person in his life, the school celeb that everyone knows, the super hot RSA, you name it. I won't continue to spoil all these men because I sure as hell am sure you will find out about them for yourself. Of course one of these guys could potentially be the love of your life guy, so let's not lose all hope in humanity. Just don’t meet a Brad ;)