The Pumpkin Juice is Better in the Other Hogwarts’ House
Odyssey

The Pumpkin Juice is Better in the Other Hogwarts’ House 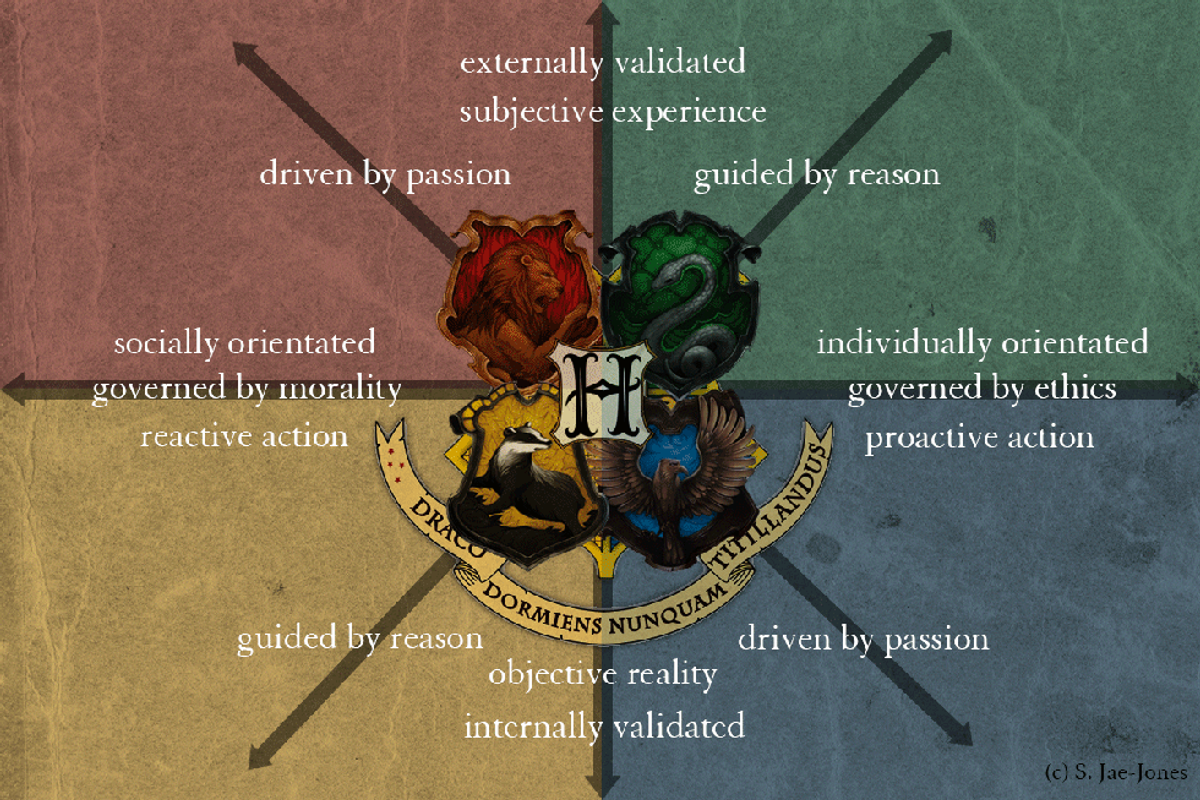 I have just finished reading the Harry Potter series – and it has been an adventure. I remember when they first came out, I tried reading them, but I just could not get hooked on them – no matter how hard I tried. But, about a month and a half ago, I sat down and thought to myself, “You have the time to free-read, why don’t you pick up Harry Potter?” Secretly, I felt like I was missing out on a central piece of Millennial culture, and I needed to get caught up.

Well, I picked up The Sorcerer’s Stone, and I IMMEDIATELY started to fangirl over it. I traveled over to pottermore.com so I could figure out what my Hogwarts’ House was and what type of wand I’d have.

I, being very gratuitous in regards to my intelligence, creativity, and quirkiness, felt as though I would best fit into Ravenclaw. Therefore, when I received my results that told me that I was, indeed, in Ravenclaw, I was naturally very prideful – “Wit, beyond measure, is man’s greatest treasure.” I felt as though this was a great fit – and I still think it is.

Though, I have some hang-ups. And they have to do with my character. While adventuring with Harry, Ron, and Hermione, I couldn’t help notice that I felt a part of me was lacking. I felt so connected to Hermione – her temper, her intelligence, her memory, her passion for justice, her level head (when needed), her emotions…they all reminded me, of me. But there was something missing that made realize that I am not as similar to Hermione as I would like to be and that is because I lack her style of bravery.

Throughout the series, I found myself being very cautious of when the trio was about to proceed into a dangerous situation. I often questioned myself, “Would I go through with it? Would I continue to stay with Harry Potter? Would I risk my life?” This all struck me especially hard in the last book, The Deathly Hallows, when Hermione was crying and telling both Ron and Harry that they had to go find the last Horcrux...not stay and fight. She was crying – she just (spoiler alert) lost many loved ones, but she still had the strength to carry on, to realize what needed to be done. Furthermore, she guided Ron and Harry to finishing the mission. She carried not just the weight of her own pain, she carried the weight of responsibility.

I contemplate my personality and outlook on life quite frequently. I am self-aware enough that I am literally afraid of everything. I can’t just go out. I can’t just do something crazy. I can’t just fight a magical, evil wizard. I am so boxed in with my worries, fears, and anxieties that I am not living. I am just being. I ache to feel life the way that Harry felt life before he was walking to his supposed-to-be death. I want to have the spirit of just being brash and brave and confident that things will sort themselves out in the end. But, alas, that is not me. That mentality, that spark for life and adventure is imprisoned with my alter ego that is attached to me, but only with a thin thread. Barely hanging on, with the ideas of “would bes” and “could bes.”

I am also aware that the Sorting Hat also takes in the choice of the wearer. If I had asked to be placed in Gryffindor – as Professor McGonagall and Hermione Granger had done – would it truly be the right fit for me? Would it have been me just trying to live through my alter ego? Or would it have been me pushing myself out of comfort zones and mental prisons, forcing me to recognize the power in living? Or…then again, maybe I am more like Luna Lovegood than I would like to realize? Being out of the box, unconventional, alternative – and being okay with all that is also a form of bravery unrecognized by most, and sometimes it is the most difficult. And though Luna was not placed in Gryffindor, she did exceed expectations when it came to her courage. She was always a rallying force – like when she produced a Patronum when Harry couldn’t muster the strength to do so, and how she let him know that she supported him. Or maybe I am more like Neville Longbottom? Who sought so hard to prove himself, but time and time again he failed. Though, when he found his niche and when he was relied upon, he excelled and stepped up to the plate.

All of this is to say that I withhold a certain envy for those that are brave, daring, and are living life. How I wish I had the soul to just…do things, say yes to crazy invitations, speak my mind when I feel feeble, live life without restraint. And while I desire to have these capacities, I know that there is someone reading this wishing that they had the capability of creativity, confidence in their uniqueness, wit beyond measure. I believe that everyone possesses certain qualities that others respect, value, and learn from. That’s why Hogwarts was so successful in defeating the Death Eaters and Voldemort. They all had unique traits that they could provide and all these gifts fit together in such a way that strengthened the resistance community.

Anyways, though ¾ of my heart and soul are dedicated to Ravenclaw, there is the fighting, passionate ¼ that is unwilling to give up the fiery hope that I am braver and more daring than I believe myself to be. That small fraction grips me and leads me when I am scared. It is myself – not my alter ego – that foresees the small Gryffindor inside of me arise when I need it most. So, even with all my doubts, fears, and hesitations I glance over to the imagined Gryffindor table and know that I truly belong there, because if I didn’t, my heart would not burn with a blistering desire to join them.