The Problem With Catcalling
Odyssey

The Problem With Catcalling 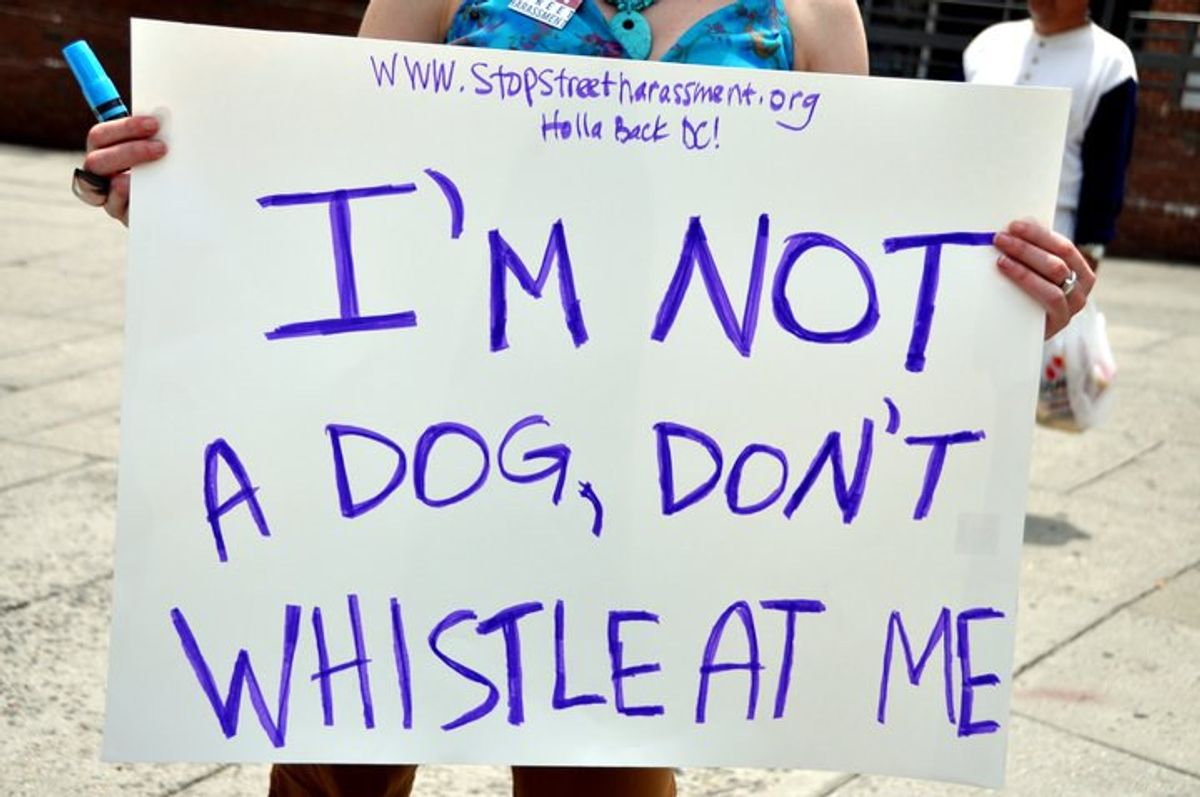 I went on a run yesterday. Right before I left, a friend came up to me and expressed her frustration at the fact that she had just been catcalled walking through the parking lot of her internship. I sympathized completely. Catcalls can be uncomfortable and awkward, and, depending on the severity of them, they can actually make you feel unsafe. After a bit of venting, I left for my run. I was looking forward to the run as a stress release after a long week, but unfortunately, it did not turn out that way.

I was catcalled about a mile into the run. As I was being whistled at, I began to think about the term catcall, and I realized that the term itself implied degrading someone else. I continued my run without too much more thought about the whistle; things like these are a common occurrence for me while running. I received another catcall shortly after, this one being a comment that made me slightly more uncomfortable; however, I chose to ignore it and keep running, as I had found this usually worked well. I completed the next few miles of my run without incident, and I passed several friendly people along the way.

Towards the end of my run, I passed a group of about 15 young men who began catcalling immediately upon seeing me. These were far beyond the scope of the other two catcalls I’d received on this run. Quite honestly, I am not comfortable writing what the men said; their comments were extremely lewd and sexual, and not only did they upset me, but they also made me feel unsafe. I actually was unsure as to what their intentions were after hearing such vulgar comments about the things they wanted to do. Although I took a detour to return back to my campus, I spent the rest of the way back worrying I would run into them again, and their comments did not leave my mind when I got back.

I do not think I have the adequate words to express how angry I am over this incident. People try to blame catcalling on what you’re wearing. I was wearing a loose t-shirt, baggy shorts, no makeup, and quite honestly, my hair looked like a mess. The “what you wear puts you at blame” argument is invalid; I received catcalling in modest clothing, and besides, clothing is not a reason for harassment. People have tried to tell me that the catcalling I receive on runs is my own fault because I am running by myself. To refute this claim, I’d like to point out two things. First, this has occurred when I am running with friends as well. Second, I should be able to go for a run alone and feel comfortable. There is absolutely no reason that I should need accompaniment everywhere I want to go. Running is a time for me to clear my head, and I often want to do that on my own. Finally, I think it’s absolutely ridiculous to try to justify the sexual comments that were made to me. I did not ask for them; therefore, they should not have been said.

I am not by any means saying this situation is unique to me, and I think that is worst part. The whole point of this story is that catcalling is an extremely common occurrence, and it is something that a significant chunk of society has deemed acceptable. After all, those boys learned to speak like that from somewhere. You hear phrases thrown around like “men will be men” or “just take it as a compliment,” but if it makes someone uncomfortable, why should they take it as a compliment? Why should they have to accept it? I know I do it, and I know several others who do the same. I accept it because often times, it’s easier than arguing it; however, I have to wonder if the smaller catcalls like the whistles open a gateway for the larger catcalls like the harassment I received at the end of that run. Either way, I personally don't enjoy any catcalling

I think that everyone has a right to feel comfortable and safe in their environment, and I honestly think that catcalls can destroy that sense of security. Catcalls are often seen as fun and harmless, and to some people they may be. Nonetheless, everyone has a right to be respected. If a woman wants you to comment on her body, then it is acceptable to do so. However, no one can know if the woman wants this or not just by looking at her, and if that woman does not want anyone to comment, it is extremely disrespectful to ignore those wishes. In essence, it's probably a good idea to just avoid catcalling altogether.

Catcalls can be uncomfortable, scary and degrading. Maybe instead of catcalls, we should try just giving a friendly compliment or saying hello. If you’re try to get someone’s attention, it will work just as well. If you’re try to make someone feel uncomfortable, this method probably will not work, and I suggest you reevaluate your goals and choices.