The Price of Making America Great

Being apolitical is a privilege. 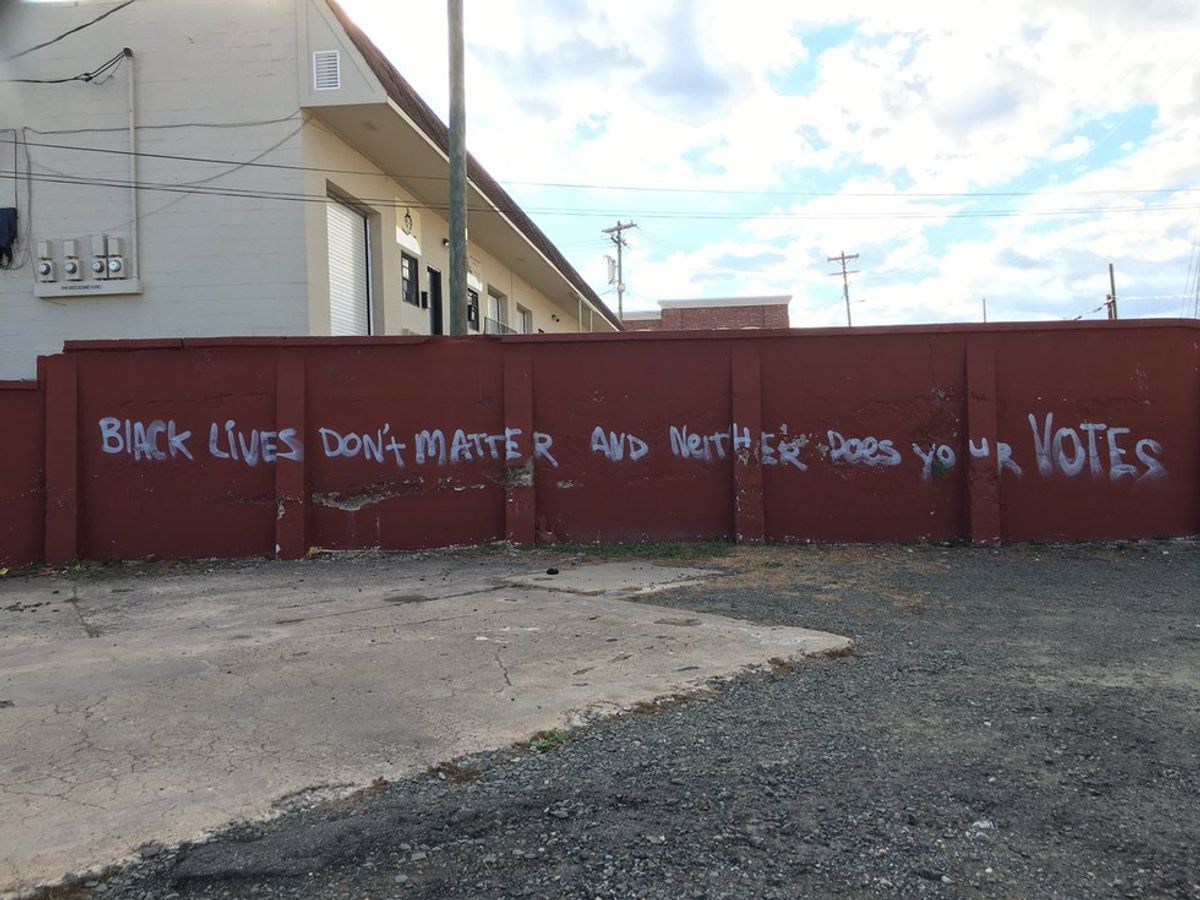 Being apolitical is a privilege.

On Nov. 8, 2016, the American people voted Donald Trump into office.

You can say Hillary won the popular vote — because she did.

You can say the electoral college is a defunct and undemocratic system — because it may very well be.

Luckily, we’ve had time — we’ve had a few weeks, and we’re already seeing the results.

Trump has decided that the best way to start his role as President is to appoint racists, sexists, and homophobes to his cabinet and transition team. And his supporters — or at least, a faction of them — have taken to proliferating racism with astounding voracity.

Once the emotional shock of Trump’s victory dissipated, people quickly pivoted toward the future. His opponents expressed concern about the overt racism that would manifest; his supporters basked in the glory of an underdog success.

And many Americans, despite their disappointment and internal thoughts, decided that the most productive way to proceed would be by giving him a chance, and avoiding dangerous reactionary behavior. Many of the people I talked to following the election had a similar outlook: It sucks, but we’ll be fine.

Unfortunately, all of the people who bought into such a sentiment were white males. And of course, for the most part, they will be fine.

They’re not the ones getting swastikas painted on their doors. The graffiti splayed across walls that reads “Make America White Again” does not invalidate their existence. They do not have to worry about how their religious apparel will be received; the cultural motifs of lynching and segregation that have sprung up do not carry the same injury.

Trump did not invent racism, and it would exist in America regardless of who was president. However, he legitimized it. He brought it out into the open, and we’re about to enter into a precarious era, where racial tensions will undoubtedly escalate. It’s not a great time to be a minority in America.

Do we give Trump a chance? Do we wait for him to act before pouncing, in hopes that his victory will soften his rhetoric and help him apply measure to his policies? It’s an avenue that provides some sort of hope in an otherwise devastating time, and optimism is always encouraging.

Yet, being apolitical is a privilege, and saying that we should give him a chance, and wait until he actually does something terrible to act is something that can only be said from a position of privilege, one where you are certainly insulated from the potential policies Trump could enact.

So how do we address the people who voted Trump? The white males who felt they were silent — and silenced — majority? Are they racists for enabling this bigotry?

Brandon Stanton of Humans of New York has begun a poignant and telling photo series about Macomb County, a “blue collar” Detroit suburb which voted overwhelmingly for Trump. He intends to capture the narratives of the voters in this suburbs; by perceiving them as individuals, rather than applying a monolithic lens to Trump supporters, we gain insight into how Trump won the presidency. Once we begin to treat Trump supporters as individuals with their own moral code, rather than simply contents of a “basket of deplorables,” his success is easier to understand.

Trump supporters cite fear of the other (a familiar cultural motif to say the least, and one which has not led its invokers to fall on the right side of history) as a reason for their support; liberal progressivism pales in comparison to their actual safety, which is not an invalid reason for supporting a candidate. Fear is a theme throughout the series, but as you sift through, it also becomes clear that the subjects of many of these portraits have a circumscribed perspective of what life in America is really like. Their evocation of racism is skewed; they chalk it up to media sensationalism, and claim that because their micro-level experiences of race relations does not meet what is portrayed in the media, racism is extinct.

It’s easy to write this off as ignorance and close-mindedness. And that certainly is a contributing factor. The fact remains that this truncated vision is reality for countless Americans, and this reality informs their political perspectives. If they do not see racism or sexism or homophobia as a huge issue, and those issues are Trump’s weakness, then a vote for him does make sense. Unfortunately, just because you, a white man in Detroit, does not see racism, does not erase it’s presence.

As one woman explained, “We all have our own code of ethics. My bottom line happened to be tolerance. Their bottom line was abortion. Or the Supreme Court. I guess we all have the right to choose our own bottom line."

However, while the narratives of those who voted Trump are sympathetic in nature and understandable, they do reflect only a slice of America. They may not be “deplorable,” but they are implicitly responsible for the rhetoric Trump spews.

People who voted for Trump are not racists. There are certain supporters, of course, who embody the close-minded, xenophobic, vitriol that Trump propagated. However, voting Trump is not an instant branding of racism. But that does not exonerate them for the culture they implicitly support.

You are not wrong for voting for Trump. You are not wrong if you abstained from voting. However, being apolitical is a privilege. And engaging in either of those acts was a political statement in and of itself. Voting Trump, or at the very least, not voting Clinton, was an invocation of that privilege. It was a strong message to minorities, to immigrants, to women everywhere that everything Trump had to offer (which, don’t get me wrong, extended beyond racism in the form of tax cuts and promise of economic growth) was more important to you than their rights.

If you voted Trump (or did not vote Clinton), you put your politics above the life of minorities. That may not have been the intention of your vote. But that is its effect, and you are responsible. This is not a partisan statement; rather, it’s an issue of human rights. This was a test of America, and we completely and totally failed.

Imagine how invalidating it must be to be a minority, or an outsider in America, and have people express that your existence pales in comparison to their political beliefs.

Trump supporters aren’t racists. But a vote for Trump is an indication that racism isn’t a deal-breaker, and the message that sends to America cannot be understated.