The Impact Of The Marvel Cinematic Universe
Odyssey
CurrentlySwoonLifestyleHealth & WellnessStudent LifeContent InspirationEntertainmentPolitics and ActivismSportsAdulting
About usAdvertiseTermsPrivacyDMCAContact us
® 2023 ODYSSEY
Welcome back
Sign in to comment to your favorite stories, participate in your community and interact with your friends
or
LOG IN WITH FACEBOOK
No account? Create one
Start writing a post
Entertainment

The Impact Of The Marvel Cinematic Universe

The MCU has revolutionized the film industry. 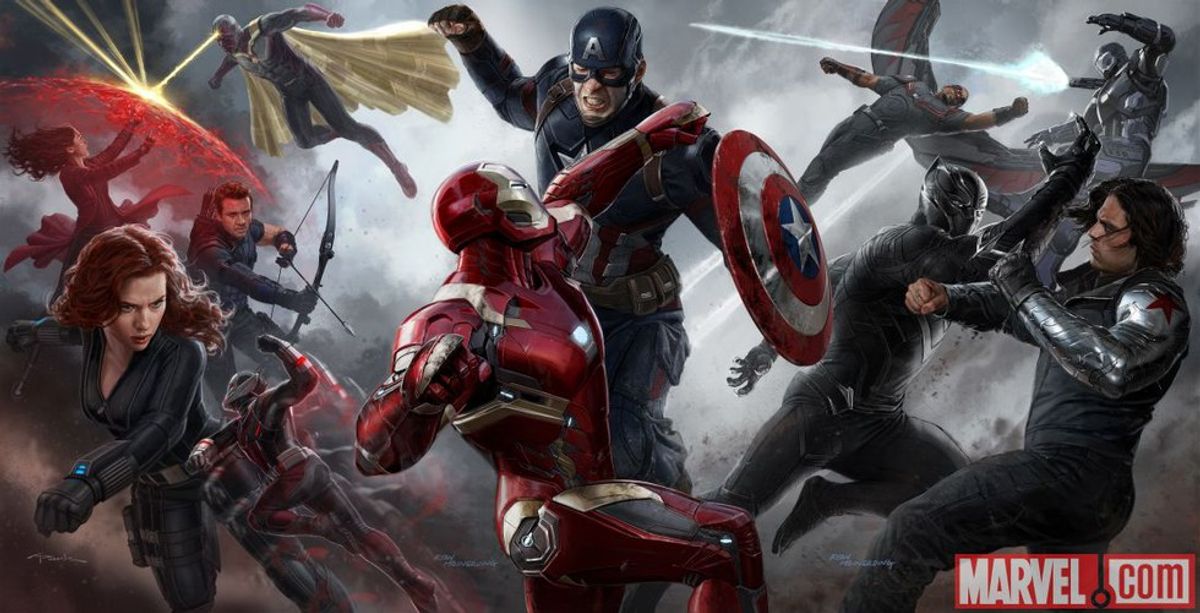 “I can do this all day,” Captain America says as he faces off against his friend Iron Man. After watching “Captain America: Civil War,” the 13th film in the Marvel Cinematic Universe, I came out of the theatre quite impressed with the movie itself, and the magnitude of the franchise as a whole.

Under Disney and the guidance of Marvel Studios President Kevin Feige, The Marvel Cinematic Universe, or the MCU, debuted in 2008 with the movie “Iron Man.” Golden Globe winning actor Robert Downey Jr. portrayed the self-proclaimed “billionaire philanthropist” Tony Stark on screen. According to Box Office Mojo, “Iron Man” made $585 million worldwide over its duration in theaters. Downey Jr. became synonymous with the character Tony Stark, and the iron weapon of death officially sparked the beginning of one of the greatest franchises in cinema history.

After the success of “Iron Man,” Marvel Studios began producing films featuring other Marvel comic book characters. The beauty of this film universe is that every movie within the series is connected, so events in one film affect events in another movie. The Incredible Hulk, Thor and Captain America received their own feature films soon thereafter. Actors Chris Hemsworth and Chris Evans, who play Thor and Captain America respectively, became movie stars overnight. At first, movie critics and the casual movie audience saw these comic book movies as a positive trend, but nothing more. In 2012, those same people were proven wrong as Marvel officially took over the film industry when the Avengers assembled for the first time on screen.

Today, "Marvel’s The Avengers," directed by Joss Whedon, is not only one of the best comic book movies ever made, but it is also the fifth highest grossing film of all time at $1.5 billion. The movie brought together famed Marvel comic book characters Iron Man, Captain America, Thor, the Incredible Hulk, Black Widow and Hawkeye (played by Downey Jr., Evans, Hemsworth, Mark Ruffalo, Scarlett Johansson and Jeremy Renner respectively) in a super hero team-up film for the first time ever. The fight choreography, the CGI and the massive scope of the movie created an excitement that had never been experienced before. A Marvel pandemonium ensued after the film’s release as children and adults alike flocked to buy Marvel shirts, comic books, toys, games and other memorabilia. The Marvel renaissance had arrived, and it was far from being over.

Fast-forward to today and Marvel Studios is currently in their third phase of films. So far three Marvel movies are in the top 10 of the highest grossing films in movie history. The most recent film in the MCU, “Captain America: Civil War,” is on pace to be yet another high-grossing comic book movie as the third installment in the Captain America series made $179 million its opening weekend according to ComScore. In summation, according to the box office results from Box Office Mojo, every movie in the MCU has generated close to $4 billion. The revenue won’t end there, however, as Marvel has scheduled around ten more movies in the foreseeable future, featuring both new and old comic book characters. The third Avengers film (split into two parts) will be among these future releases.

At an initial glance, the MCU has mainly made a financial impact on the film industry. But in reality, the MCU has impacted us on a cultural level. Moviegoers are now infatuated with these comic book characters and the fate of heroes such as Iron Man or Captain America is very important to audiences. Kids look up to these characters and adults are enjoying the development of these characters as well. The MCU turned comic book movies from cheesy films into well-respected, thrilling, must-see events. The fame of the MCU has inspired other companies as Warner Bros. has their DC Comics movie universe and FOX has the X-Men universe. However, it will take these other companies a long time to catch up to Marvel’s current pace.

The Marvel Cinematic Universe is a masterpiece in that it continues to garner more and more support with each passing film. Comic book stories have left the pages and are now front and center on the big screen. For the foreseeable future, Marvel’s finest will continue to own the film industry. And as a response to any doubters, Marvel Studios would probably take a line from Captain America saying that they indeed “can do this all day.”