The Justine Sacco Story: How A PR Exec. Caused Her Own Bad Publicity!
Odyssey

The Justine Sacco Story: How A PR Exec. Caused Her Own Bad Publicity!

A Life Lesson On Why You Should “Think Before You Tweet.” 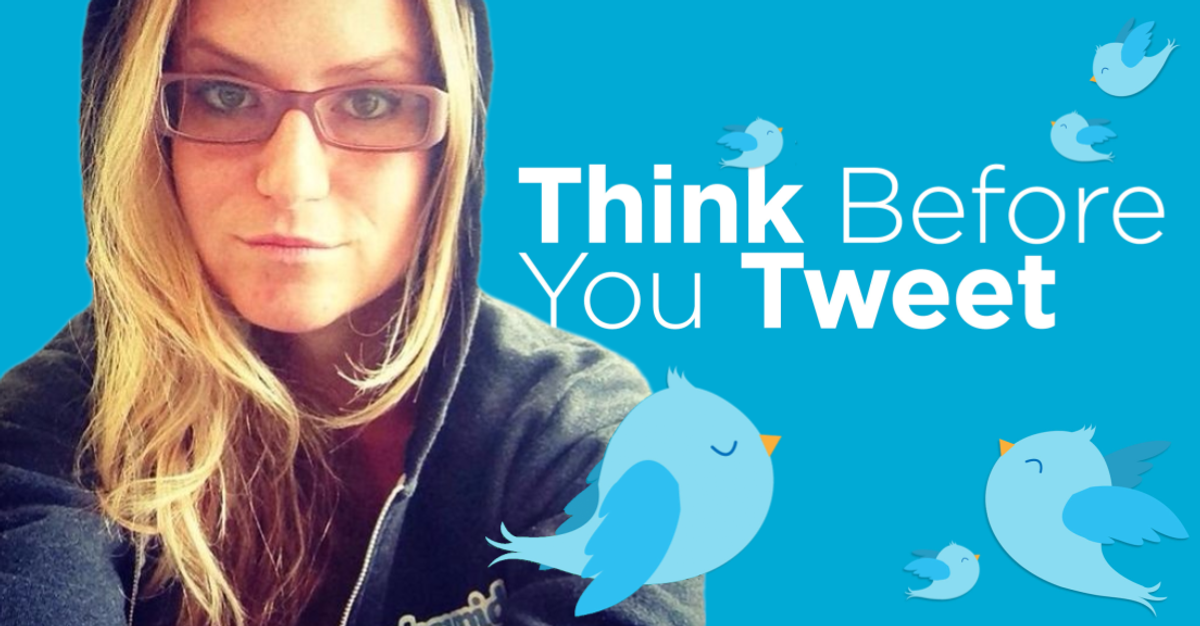 Imagine this scenario, you are flying from New York to South Africa in order to visit your family. It is December 20th, 2013 and you have landed in London for a layover. Right before you board, you have decided to tweet a funny joke to your 170 followers. Before the flight takes off, you see no new notifications. After 11 hours in the air, you have finally landed. Once you have turned your phone back on, you have discovered that you are the #1 trending topic on Twitter, worldwide. Also, fired from your Senior Director of Corporate Communications job at InterActive Corporation. If you are Justine Sacco, this is your story.

Justine Sacco’s original tweet, which has since been deleted.

Before the Twitterstorm, Justine Sacco was a PR executive for InterActive Corporation (IAC). Her job involved helping major companies, like College Humor and Match.com, with public reactions work. She was only 30 years old and had one of the greatest jobs of all time. While she worked in New York, her father was living in South Africa. Justine decided to visit her family during the holiday season. Sacco has made questionable tweets before, but none of them has landed her in trouble before. Some include “I had a sex dream about an autistic kid last night. #fml” and “I can’t be fired for things I say while intoxicated right?”

One of Justine Sacco’s followers was finally shocked to see the offensive tweet. The follower sent the tweet to a Gawker journalist with 15,000 followers. The journalist, Sam Biddle, retweeted the offensive comment. Thus, a Twitterstorm was born. Buzzfeed first shared the tweet to millions of people. Soon, The NYTimes, Daily Mail, ABCNews, Rolling Stone, The Guardian, Washington Post, and more were writing about the story.

During the Twitterstorm, when people Googled her name, British Airways Flight 43’s flight tracker appeared. This was the exact flight that Justine Sacco was on. Many people were tracking Justine’s arrival time. Since Justine had an 11-hour flight with no wifi, people knew she did not realize the fiasco she created. The people of Twitter were anxiously waiting to see what Justine would do after her realization that her racist tweet went viral. Because of the long wait, people began tweeting #HasJustineLandedYet, which was the exact hashtag that trended number one, worldwide.

A map showing where Justine’s tweet became the most viral.

The people of South Africa began boycotting Justine’s arrival. Many people wanted Justine to be sent on a flight back home. Others were tweeting InterActive Corp. to fire Justine. Others were trying to spread awareness to the issue of AIDs. Most people were tweeting to Justine about her ignorance on the issue. Justine is the white woman in the header. What is most upsetting about her tweet, is how she knows how lucky she is to be white. While AIDs can affect many kinds of people, it mostly affects people in Africa. Instead of Justine realizing how lucky she is to be a white woman in America, she mocks those who are less fortunate than her. This is why her tweet went viral, people were upset about how ungrateful she was to be living an AIDs free life.

Once Justine Sacco landed and discovered everything, she did not issue an apology. Instead, she began to delete her Twitter, Instagram, and Facebook accounts. Days later, she finally apologized but it was too late to say sorry for her racist tweet.

Justine Sacco explained herself years later to the journalist. In his book, So You've Been Publicly Shamed, Ronson shares what Justine meant with her tweet. She explained to Jon Ronson, “Living in America puts us in a bit of a bubble when it comes to what is going on in the Third World. I was making fun of that bubble.” If this was true, that does not explain her previous racist tweets that are down below. Her previous racist tweets do not “make fun of that bubble” in any way.

Other racist tweets that Justine tweeted the night before her AIDs tweet.

An African man named Zac was at the airport where Justine Sacco landed. He was able to find her father and explain the tweet to him. Justine’s father explained that Justine was born in South Africa, but in 1994, he moved the family to New York so that they would not witness the racism at the time. South Africa's apartheid regime ended in 1994, but there was still a major issue of white Africans murdering black Africans for superiority. Justine’s father told Zac that he disapproved of Justine’s tweet and called her an “idiot.” You can see Zac’s tweets below.

Justine Sacco’s company said “This is an outrageous, offensive comment. The employee in question currently unreachable on an into flight.” IAC then revealed to firing her during her flight to Africa. Other major companies and celebrities began tweeting about Justine’s racist tweet. Gogo is an airline that provides wireless internet access. Gogo’s tweet became very popular during the Twitterstorm. Also, Donald Trump (not president at the time) made a “You’re Fired” joke about her. Also, Kerry Washington and Steve Martin made their own jokes on Justine’s tweet.

One of the greatest things to come out of this racist tweet was donations. That night, in disgust of Justine Sacco’s racist tweet, people began to donate to organizations like Care Org., ONE Campaign, and Aid for Africa. These organizations help victims of AIDs in Africa. Aid for Africa even bought the url “www.justinesacco.com” to help create PR for their charity.

The website for “www.justinesacco.com” where you can donate to help victims of AIDs in Africa.