The Growth of The Good Place
Odyssey

SPOILERS for Seasons 1 and 2 of the Good Place 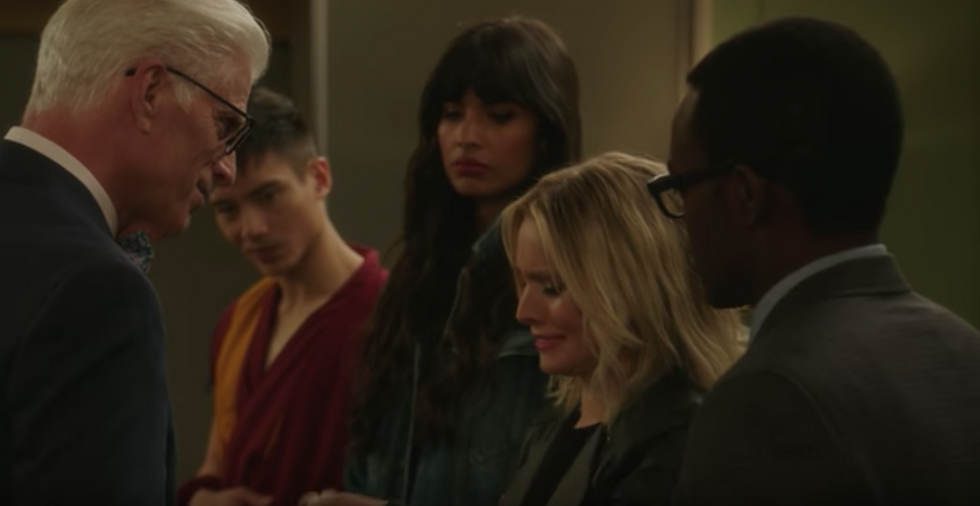 Growing as a person is difficult. While we all should strive to be better people, it's hard to change who we are complete, especially as we age. Many don't think that they could change even if they try.

Such is the case of the main cast from NBC's The Good Place, created by Michael Schur (wrote episodes of The Office, produced and created Parks and Recreation and Brooklyn Nine-Nine). The story of horrible people trying to better themselves to enter the real Good Place certainly has its ups and downs.

Like the characters trying to change, it's easy to give up on the basic concept of the program and stop watching. However, The Good Place succeeds through the growth of all characters and interesting twists that toy with its concept.

The main story begins Eleanor (Kristen Bell) wakes up in a room with the words "Welcome! Everything is fine" painted on the wall. Michael (Ted Danson), an angel, tells Eleanor that she's dead and has entered the Good Place and will be given a soul mate. However, Eleanor was actually horrible in real life and was accidentally placed in the Good Place.

To make matters worse, horrible disasters happen when Eleanor does bad things, like a sinkhole opening in a restaurant and giant shrimp falling from the sky. To stay in the Good Place, Eleanor learns ethics from her soul mate, Chidi (William Jackson Harper), and keep their secret from Michael and their neighbors. However, the Good Place may not be all that it seems.

The great storylines are present because the great writing team that creates strong characters. Eleanor, while obnoxious in early episodes, consistently proves that she's more than just a foul person. She shows growth. When Chidi teaches Eleanor ethics, she may blow them off at first, but she actually tries to learn and become a better person worthy of the Good Place. Not to mention that Bell adds a ton of charisma to the part.

Ted Danson is also fantastic as Michael, a demon from the Bad Place who designs the Good Place to torture Eleanor, Chidi and their neighbors, Tahani (Jameela Jamil) and Jason (Manny Jancito) as an experiment. Through the first few episodes, Michael is a little bit too nice and not very interesting.

However, as the first season goes on, Michael becomes more cynical and delivers more straight comedy, which Danson excels at. Also, when it's revealed that Michael is a demon, his whole character changes and Danson really has fun.

However, Michael also grows. After the main cast finds out his secret, Michael is allowed one reboot to start over and wipe the main cast's memories, which is where season two ends. Now, for most programs, wiping the cast's memories would serve as a lazy gimmick to reset a show.

With The Good Place, it is used as a way to give Michael some development. The main cast finds out again, but instead of going back to his boss, Michael continuously reboots The Good Place, redoing the Good Place over 800 times until he gives up. Thus, Michael decides to team up with Eleanor and company to trick his boss.

However, to prove his loyalty, Eleanor forces Michael to take Chidi's ethics classes and prove that he's a part of the team. Through these classes, Michael, an unholy demon, learns the errors of his ways and actually starts to learn what it's like to be human. Such growth is unheard of for such devilish characters.

It not only leads to some hilarious jokes but also leads to more character growth. Such is so that Michael actually sides with the gang and tries to get four bad people to the real Good Place.

Now, the show isn't perfect. The first couple of episodes are mediocre. They use all of the stock, boring jokes that you would expect from a show like this. Also, the cinematography is bland, and the music used is mostly forgettable.

However, like the main characters, The Good Place is a show that grows and improves with each episode. Jason, an idiot, Blake Bortles fan, gets married to Janet (D'Arcy Carden), a humanoid robot designed to do nothing but good for everyone. How can you not laugh at such an inventive setup?

Overall, The Good Place is a really solid show, one with great laughs and even some character depth thrown in to raise it above normal network shows. While it has its flaws, The Good Place proves that anyone or anything, no matter how low, can always improve.