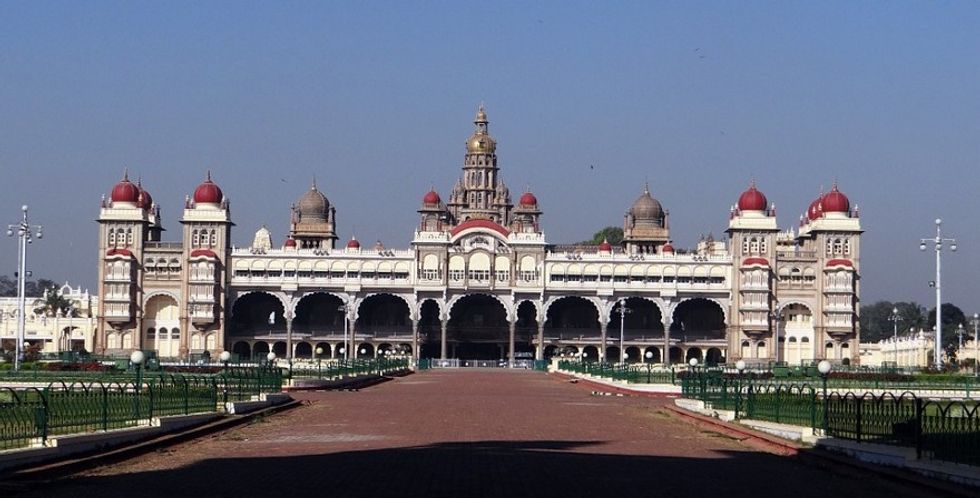 When it comes to monuments- India is known for it, thanks to our modest historians who welcomed all kind of people whether they were good or in garb of wolf that plundered the famous golden bird. India inherits mega beautiful monuments, which are exotic, and give breathtaking experiences. One such place which is housing many such monuments is Mysore, and the one and most famous monument which keeps tourist mouth wide opened due to its charismatic and gorgeousness royal appearance amidst all palaces is "Mysore palace" also known as "Amba Vilas Palace".

It is a famous historical palace belonging to royal Wadiyar dynasty; located In Karnataka in centre of Mysore and face the tall Chamudi Hills. It is next in a row to "Taj Mahal" when it comes to famous tourist spots in India.

Moving to history, the place where the monument stands was known as "Old Fort": king Yaduraya in the famous dynasty of Wadiyar built the first palace inside the old fort. Historians reveal that the original Mysore palace was demolished and rebuilt for multitudes of time. The palace which stands now came into the picture in the year 1912. It took more than a decade to construct the famous monument of India "The Mysore Palace". Digging deeper in history showcases that King Krishnaraja Wodeyar IV along with his mother appointed a British architect to build the current palace, and it was designed in a style very famous in that era.

Mysore Palace is Pride of Karnataka and India combined, the palace has been moulded into a museum, and all royal heritage like the paintings, jewellery, royal dresses, souvenirs, gold items are well protected and showcased to visitors.

Amazing facts about this famous monument of India:

Things one should not miss while visiting the palace:

Bengaluru is one of the famous cities of India. The best way is to reach Bengaluru and then the destination i.e. the famous monuments of India "Mysore Palace". By air, the nearest airport to Mysore is the Bengaluru airport.

Distance between Mysore and Bengaluru is about 14km and time taken to cover is about 3- 4 hours, one can rent a car or take a taxi to Mysore and enjoy sightseeing along the way to Mysore, Cabs can be booked with help of the travel agents in places like Bengaluru, Ooty, Coorg and nearby cities at reasonable fares.

By Bus route, one can board a bus from Kempeggoeda Bus station located near to Bengaluru city railway station to Mysore.

By Train, Mysore railway station is connected to all the major cities of India like Hyderabad, Mumbai, Chennai and Kolkata, via direct trains.

Time and schedule for tourist:

Visiting hour's starts at 10 am morning till 5.30 evening –Every Monday to Saturday.

We get Dusshera special light and sound show in evenings, Monday to

Wednesday show is conducted in Kannand and other three days in English.

So do visit this historical monument of India.