Truth Is The New Hate Speech

Truth Is The New Hate Speech

The disease that is political correctness. 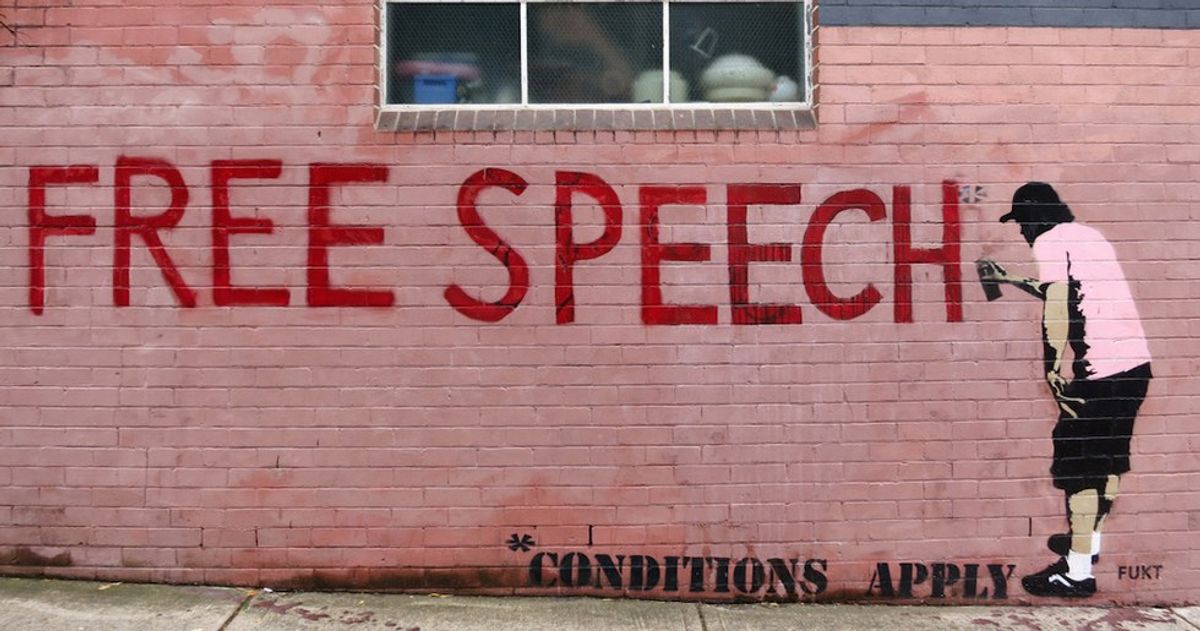 No Place For Sheep

The generation of soldiers fighting in WWII and Vietnam had to dodge mine after mine in a field of destruction, but our generation currently has to step with care to avoid a different type of explosion: being politically incorrect. With each passing day, another term or phrase is chucked into the oblivion of forbidden language, in which our own peers lock up the gate and throw away the key. Contrary to the entire evolution of human thought, the American right to believe in a certain way of thinking is being taken away from us in a literal act of ideological robbery. It's been decided that stripping us of these ideas is more important than an open and respectful discussion. Not only that, but political correctness covers a greater area than just words: it's primary use is to create and shape a political agenda.

Welcome to the bubble that is the college campus. Here are six things a politically correct culture does to a collegiate environment.

The PC movement has been somewhat successful at preventing opposition to their cause, effectively silencing those who may disagree. Many student groups on these campuses also believe that "hate speech" should be banned, which infringes on the First Amendment of the Constitution, which gives every American citizen the right to free speech. Not only does this ridiculous demand deny one's right to say what they want to, it also completes the vicious cycle of silencing someone by taking away their rights as an American. So, to recap this example, the movement silences opposition by attempting to take away the right to free speech, and it takes away the right to free speech by trying to silence opposition through the claim that "words hurt." In addition, I think it's important to hear all types of speech, even speech that some may find bigoted or offensive, because all it does is further the intellectual diversity of this country and it expands your perspective.

While the intent of political correctness may be pure, the environment that it creates is one where people are afraid to even talk about controversial topics. People are now scared to share their opinions openly and have a respectful debate about them for fear of offending someone and becoming a "trigger." Furthermore, the idea that we should make language politically correct is really another way of saying that we should engage in creating and facilitating nurturing lies by hiding harsh but necessary realities and sugarcoating the truth. Lastly, this policing of language and ideas is ultimately a measure that throws out the free exchange of ideas, a system that is what makes this country so beautifully transparent and diverse.

3. Builds a bubble of intolerance, ignorance and victimhood.

The idea that many students on college campuses are now requiring "safe spaces" for people who have been traumatized -- and I use that word liberally and satirically -- by opinions and ideas that don't align with their specific types of prejudice is absolutely preposterous and is giving these weak, entitled souls a narrative of victimhood. Young adults who willingly choose to be in a higher-education environment in order to expand their world view and perspective on an unlimited variety of subjects do not need to be coddled into thinking that never hearing things they do not like is perfectly OK. It's not the school's job to protect you from opinions you don't necessarily agree with and don't like -- in fact, it's quite the opposite. Ideas that are different from the ones pumped into the typical liberal agenda on campuses that are now seen as "triggering" do not warrant safe spaces to hide and cower in fear from them. It's time to escape the narrow-minded way of thinking that this PC culture unknowingly perpetuates, and to finally stop being intolerant to ways of thinking you don't like, agree with, or understand.

4. Forwards a specific political agenda and creates an implosive society.

For those who just think being PC is refraining from using harmful language, the actual primary goal behind political correctness is to push and promote a specific political agenda, while simultaneously stomping out opposition. As a result of the widespread panic of being PC amongst the millennial generation, we've created a fragile culture that just cannot stand to hear anything it doesn't like, which is equivalent to the behavior of a toddler. It teaches young people that it's A-OK to only be surrounded by people and ideas that you agree with, and if you come across someone that doesn't align with your ideology, the appropriate response is to show a complete lack of respect by trying to silence them through hollow jargon.

While the movement claims it advocates for the equal treatment of all different types of communities, what it's really doing is putting an emphasis on all of our differences. What should happen in American society is that we recognize cultural differences, but we overcome them to unite as one thing: Americans. What actually happens is that our differences are put into such a blinding spotlight, that it's impossible to get them out of our television sets and out of our heads. Not only that, but it also can prevent people from exploring outside their "designated circles." For example, if you're a woman who chooses not to identify as a feminist because many of feminism's current ideologies don't align with your own beliefs, most of the time you'll be branded as a woman-hater and a betrayer of your gender. If you're African American and you don't support the Black Lives Matter movement because you don't believe it's the answer to all of the racial tensions in this country, you'll most likely be accused of betraying your race, which is a subtle type of racism in itself.

The PC movement preaches inclusiveness, respect, and equality, but it gives no respect or inclusiveness to people who have differing opinions, and it certainly doesn't hold them equal. Many or all people who are a part of the PC movement are supposedly advocates for getting rid of hurtful or hateful language, but seem to have no problem using it for their own agenda, and throwing around harmful buzzwords like "racist" or "sexist" at someone who has ideas they don't want to hear. While they're continually whining that "words hurt," they don't appear to apply that to their own ideology when the names they spew at the opposition can have a damaging affect to their image and reputation, or are just factually inaccurate.

So, the next time you claim that being politically correct can be a good thing, remember that there is in fact a huge difference between being PC and being courteous and following the proper rules of etiquette. The idea of political correctness -- note the word "political" -- is nothing more than a tactic used by politicians to promote a certain agenda and pit it against the opposition. Never relinquish your right to free speech and never allow someone to hinder your ability to expand your world view.