The Damage Trump Has Done In Just One Week
Odyssey

The Damage Trump Has Done In Just One Week

It's going to be a long four years. 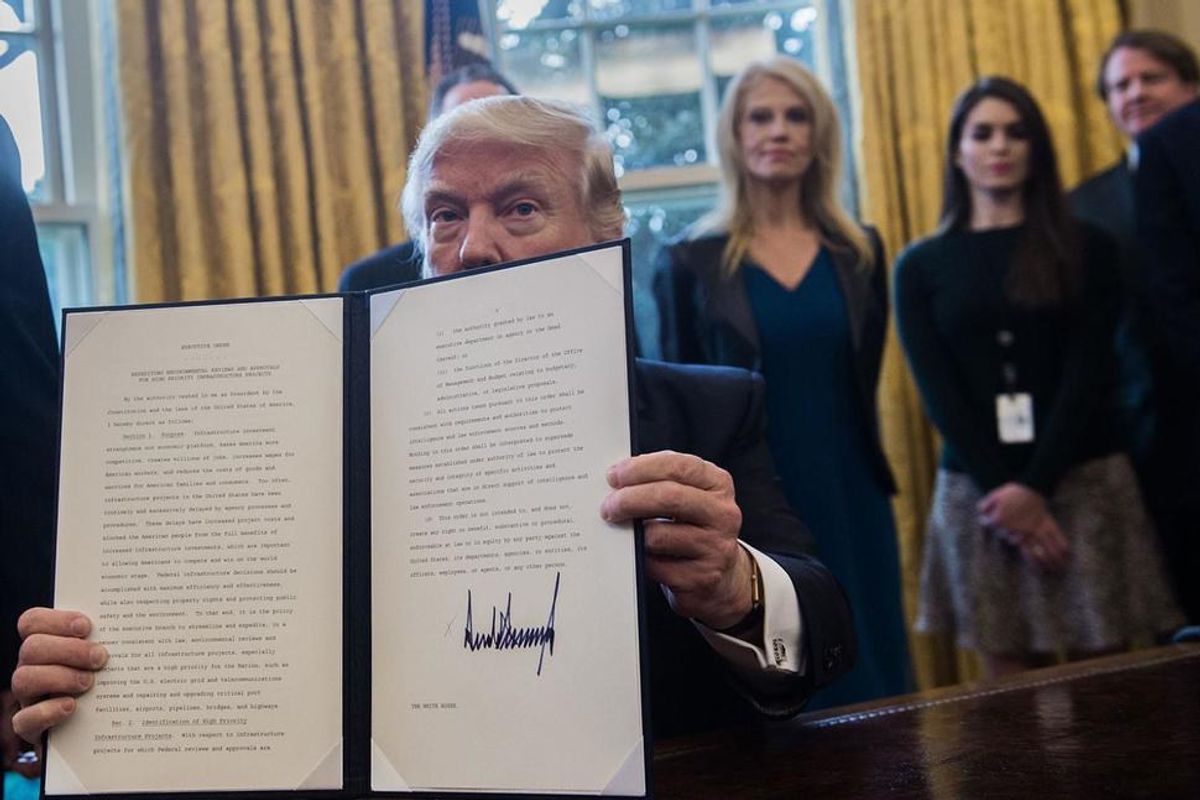 It's been a little over a week now, and in a not-so-shocking turn of events, President Donald Trump has done so many infuriating things that I can hardly believe it's even real. To all those out there who said "well, just give the man a chance," I am here to tell you that in like the first 24 hours he lost his second chance in my book.

So if you've been hiding in your bomb shelter for the past week and haven't heard some of the executive orders good old Donald issued, let me sum them up for you (probably not in order - there have been so many in so little time, who can remember the order anyway?).

Of course the first thing Donald did in office was tackle Obamacare. This executive order won't really have much effect on people at the moment - it will take a long time to get rid of the Affordable Care Act - but he had to make this grand, pointless gesture to remind us that he's in control. Like we could forget.

2. A hiring freeze for federal jobs.

The freeze is tentatively supposed to last three months, I hear, but who knows - maybe we'll just toss out the federal government altogether. According to Fox, Trump is doing this to "shrink the size of the government." So no new hires, no replacing people who have left their jobs, and no new positions to be created. Seems like a great idea, right? Who really needs that huge governing body that, oh, I don't know, makes sure our country doesn't devolve into a society similar to the Purge.

Don't worry, though, this won't effect the military at all.

Doesn't that make you feel better?

3. An expansion of the military.

This was one of the earlier orders, and it was one that made me incredibly angry. Basically this order bans the U.S. from funding health providers internationally that discuss abortion as an option, or that help women in getting abortions. So now, organizations that help women internationally with a number of healthcare options will have funding cut because they either discuss abortion, or provide the service itself.

He missed the Women's March, didn't he. I know he got sworn in on Friday and said he'd really get to work on Monday, but what, did he sleep through that whole march? Did he miss the point?

Also, if we're going to refuse to allow these women access to abortions, are we going to be helping them with their babies once they're born?

Oh, that's right, that brings me to the next order...

I know, you're shocked, right? Donald decided to "suspend" refugees from Syria from coming to our country. Until we can go over the system instated in our country for vetting the refugees coming in. Actually, he's suspended immigration/refugees from seven Muslim nations. To make sure we're safe, of course, not because we're a heinously racist nation that can't understand that "Muslim" doesn't equal "terrorist."

The World Bank census data estimates that means we'll be denying 134 million people from entering our country. And there are predictions that it'll end up being more than just 7 countries, and possibly more than just 90 days.

6. ...but we're going to help the Christian refugees?

Okay, so this isn't an executive order. Trump actually spoke about this in an interview. But he said he wants to try to help out Christian refugees because previously, mainly Muslim immigrants were being accepted into our country. He thinks that's not fair.

You know what I think isn't fair? Deciding someone does or doesn't get safe asylum in your country based on the faith they believe.

As a Christian, this infuriates me to no end. Everyone deserves safety. And we need to stop making Muslims out to be the terrorists of the world - they all need help, regardless of religion. Why can't we just help them?

This one broke my heart. The Standing Rock Sioux tribe fought hard for the halt the Dakota pipeline. And honestly, we've taken so much from Native Americans... I just can't believe we have the audacity to revive these damn pipelines. I don't think I can even talk about this one.

8. A freeze of some EPA grants/funding (and gagging them on social media).

This was an earlier snafu in this week, as Trump basically tried to shut the Environmental Protection Agency up. We all know Donald doesn't believe in global warming (what are the odds that all of those scientists are right...?), so it doesn't shock me to see this. But of course, freedom of speech is usually the first thing to go when a dictator comes into power, and we see something alarmingly close to that here. A social media freeze, Donald? Did you really think you'd get away with that?

And of course, this one wasn't surprising. Trump ordered for the planning of the wall. Seems like they'll have to jump through a lot of hoops, but I'm slowly losing faith in humanity, so we'll probably end up with a prison wall between us and Mexico. Trump has kept up the charade that Mexico is going to pay for this wall, but now it turns out the taxpayers will be paying for it and Mexico will "pay us back."

Mexico's President cancelled a trip to America because of this. He says they won't be paying for any wall.

One country ostracized; 194 to go.

He's probably done more, but for my own sanity, I'll stop there.

Ultimately, I think that what bothers me most is that Donald Trump, in 7 days, issued so many executive orders. You don't just decree that this is how things will now be - it shouldn't work like that. Presidents typically take the executive order thing a little more seriously. Donald, you're not supreme overlord just yet, so stop showing off your power. It's childish, and infuriating to the overwhelming number of people in this country who just don't believe in you (honestly, you're not helping the matter, either).

Every day I look at the news and find something else I want to cry about, and also rage on about until I can stop seeing red. I just think that these executive orders showcase an America that I am not proud to be a part of. And I also think every executive order Trump signs, it's another slap in the face to Americans; it shows a deep disrespect to us and what we want as a people.

Because he's not working for the people. He's working for himself. And we all damn well know it.

Something has to give. Because we won't stand for this, Donald. We won't.