Everything You Need To Know About Taylor Swift's New Video "Delicate"

"If they don't like you for being yourself, be yourself more." -Taylor Swift 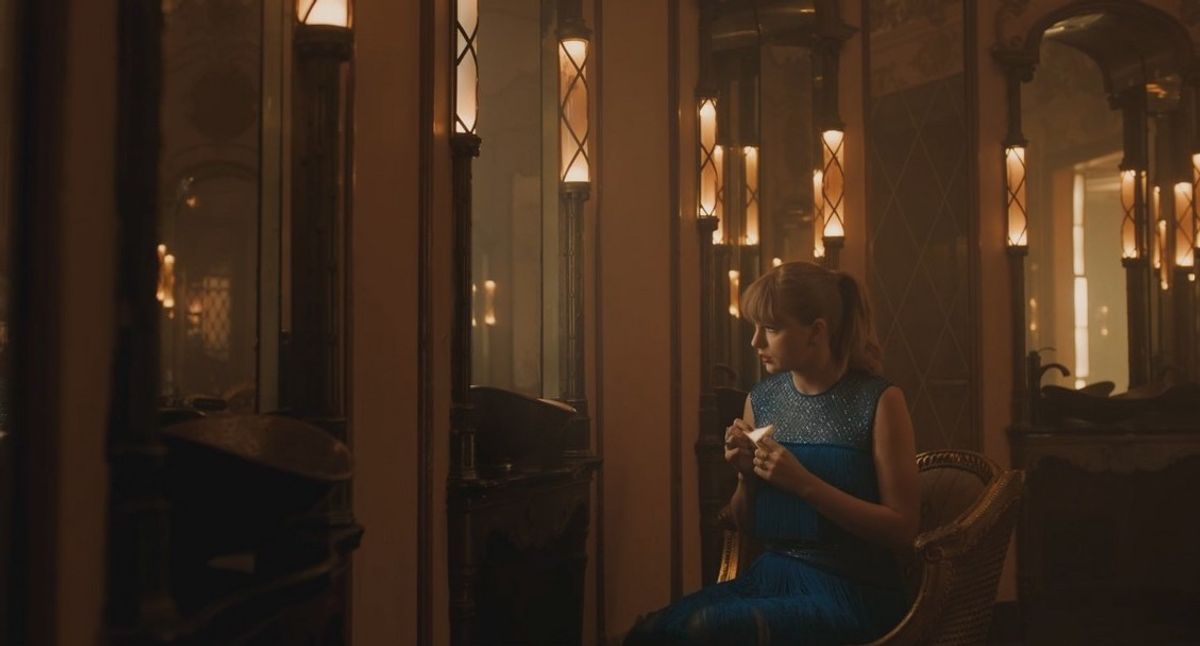 Taylor Swift; an icon, a legend, a story-teller and now a happy, care-free woman.

After Swift released her album reputation in November, there was a lot of hype about track number five, titled "Delicate." We all knew that this song was one of the biggest anticipations off of the record but what we didn't know was the meaning behind the song and after Swift released the music video for it at the iHeart Music Awards show, we now can all go to bed knowing that Ms. Swift is happy with life.

The video starts out with Taylor on the red carpet with a beautiful gown and of course, red lipstick. Her facial expressions at the beginning make it seem like she doesn't want to be there, same old same old things that she is sick and tired of. Being interviewed by hundreds of press people and paparazzi on her every move. Knowing Taylor, she is not a fan of all the press being on her all the time.

After she gets through all of the paparazzi and press, she is handed a note (Hold on tight! The note becomes important later on). Taylor is then seen walking through the hotel with hotel body guards surrounding her, almost like they are keeping her away from her fans and all of the other things around her. The next part of this video is a big shoutout to her fans, as she is shown taking a selfie with a group of girls, Taylor's face is lit up and happy as ever but is then ruined by the body guards who take her away from that. We all know that Taylor adores her fans more than anything in the world and they are the ones who keep her sane.

Taylor just wants to be able to connect with the people that keep her going and the media won't let her do that, because one wrong move and Taylor's reputation could be ruined, again. After being torn away from her fans, she's shown in a dressing room in front of mirror looking at herself wondering what she's doing wrong and why people need to treat her in ways she doesn't want to be treated. Now, for the part that made every Swiftie's heart explode with happiness, Taylor decides to be herself for once and makes goofy faces into the mirror but when other people walk into the room and she waves at them and they don't see her she finally realizes something. Looking into the mirror once again, she doesn't see her reflection and becomes invisible to the world.

After she realizes that she's become invisible to the world and everyone around her she starts to become herself and dances around the hotel like nobody is watching, with her facial expressions becoming happy once again.

After her dancing moments in the hotel, Taylor gets into the elevator with a woman and they are face-to-face with each other and the woman smiles at Taylor and this is the moment when Taylor think somebody finally notices her for being herself but in the end the woman was smiling at the mirror in the elevator fixing her lipstick and once again Taylor realizes that she's still invisible to everyone.

Taylor is dancing in the rain. Now we all know how much Taylor enjoys dancing in the rain, ever since her first album she's had a thing for water. Now, this scene specifically screams out the Fearless era because of the line in the song "Fearless" that goes, "in a storm in my best dress, fearless." Swifties immediately got emotional, because that same dream that 12 year old Taylor had about dancing in the rain and being herself still exists 16 years later.

Going back to the video, you'll notice that Taylor looks the happiest in this part. She doesn't give a care in the world and doesn't care what anybody thinks of her because she has come to the point where she just wants to be herself and not succumb to what the media makes her out to be. The video ends with Taylor going to a dive bar (possibly on the East side?) This is where the note comes back into play, she goes into the bar looking for the guy who gave her the note. She gets into the bar, everyone is looking at her, but she ignores all of them looking for the one who likes her for her.

Once she sees who she's looking for (Joe?!) she realizes that she can just be herself with him and can let the rest of the world just pass her by.

Taylor's message in this video is truly beautiful. Something that no one has ever done in the music world, taking a song and making the meaning of it something that nobody expected out of her. She is truly done with what the media perceives her to be and has officially "cleaned" (1989 ERA!!) her reputation and can be herself once again.