How do you fight someone who can copy and predict your every move? 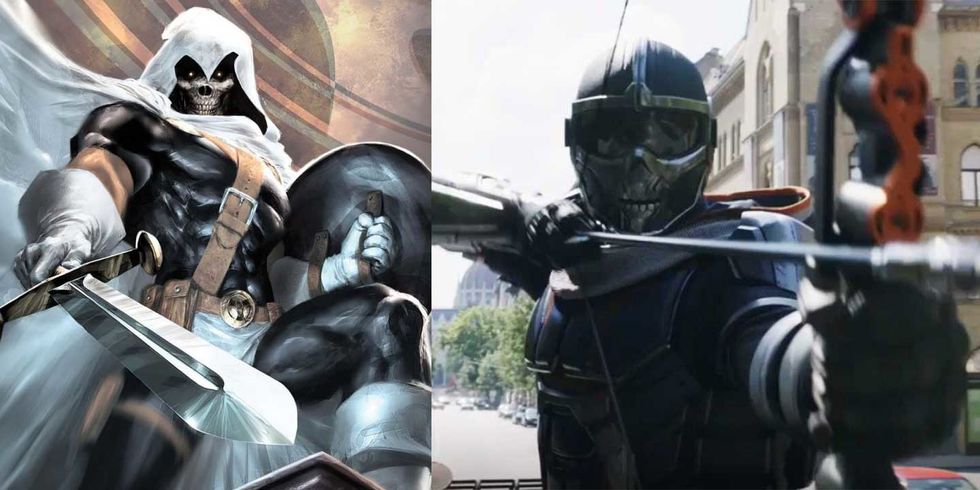 After decades of fan wishes and copyright restraints preventing the introduction, one of Marvel Comics' most feared and lethal hired assassins, Taskmaster, will finally be getting his long-awaited shot at the big screen in Marvel Studios' upcoming "Black Widow" solo film.

Since his debut in 1980's Avengers #195, former S.H.I.E.L.D. agent Tony Masters a.k.a. Taskmaster has been a thorn in the side of various Marvel superheroes, from The Avengers, Spider-Man, Deadpool, Ant-Man, and Daredevil.

While Masters does not have any apparent superpowers, the villain doesn't particularly need them to be more of a credible threat than he already is. Fortunately for the heroes, Taskmaster can only copy the moves of his targets, not their powers or superhuman abilities.

Taskmaster's abilities acquired from years of observing others (binge-watching before binge-watching) have allowed Masters to gain the upper hand on virtually any opponent he comes into contact with.

In the recent trailer for "Black Widow", there is a brief glimpse of Taskmaster analyzing the title character's iconic hallway fight scene from "Iron Man 2", likely using the stolen footage as a means to get a feel of Agent Romanoff's fighting style/technique.

Taskmaster's MCU incarnation is said to be the head of Russia's Red Room program, the facility used to train potential Black Widow spy candidates. Though Taskmaster being head of the Red Room is a slight deviation of the source material, it is not that far off from Taskmaster's comic counterpart who has established his own illicit training school for low-level criminals.

If an average criminal manages to put up a good fight with highly skilled seasoned heroes like Daredevil or Spider-Man during a bank robbery, there is a good chance that Taskmaster is the one responsible for training them... before they ultimately end up in jail again.

What makes Masters even more distinct from the more grand villainy of a Doctor Doom or Thanos is that he is not in the villain business to ultimately take over the world. Taskmaster sees each new assignment sent his way as a paycheck while testing his photographic memory skills along the way.

Nothing more, nothing less.

But, apparently, Black Widow is not the only MCU hero that this film version of Taskmaster has run into. Throughout various points of the trailer, Taskmaster is not only seen copying similar fight moves as mainstay heroes, but acquiring a shield reminiscent of Captain America, a crossbow taken straight out of Hawkeye's tool shed, claw gloves that would give even Black Panther a run for his Vibranium, and even a sword that may or may not be modeled after the Ebony Blade of the Black Knight, who will be making his introduction in this fall's "Eternals" played by "Game of Throne's" Kit Harington.

No cape in sight, but the face obscuring skull mask is intriguing enough for Taskmaster's first outing on the big screen.

Moving on from "Black Widow", Taskmaster has even had a presence in the "Ultimate Spider-Man" animated series, video games like Marvel vs Capcom 3, and most recently "Spider-Man" for PS4 where the master assassin was hired by the evil science organization A.I.M. (Advanced Idea Mechanics) to target the web-slinger.

Taskmaster has had a long run in comics, video games, and TV for decades, but his career on film is just beginning with "Black Widow" hopefully being the first of many appearances in the MCU that will only see the villain continue to build up his impressive replication abilities.

Madison Franz
The Narrative
1120442
Photo by Brooke Cagle on Unsplash

Madison Franz
The Narrative
655704
Photo by Manny Moreno on Unsplash