Have I mentioned I'm a television and film major? 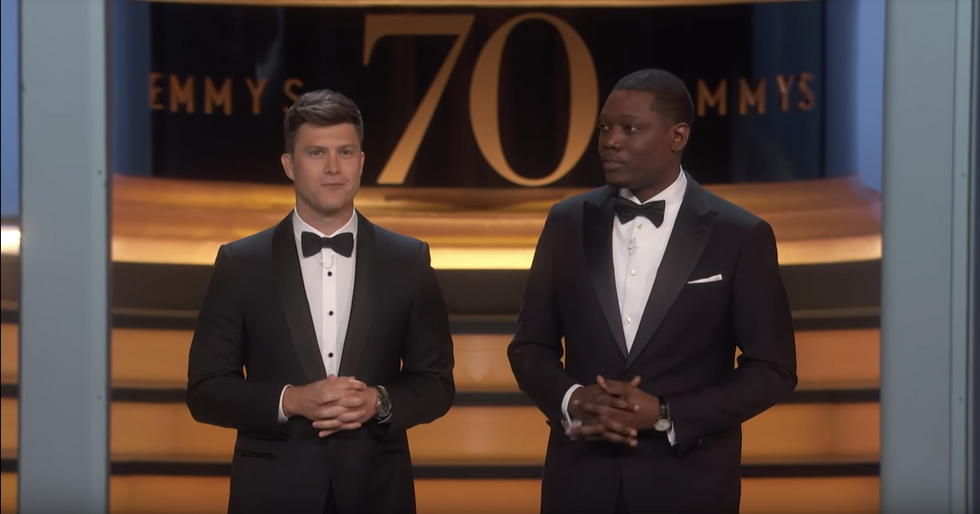 Last week was one of the biggest nights on TV, aka The Emmys. This year's show was hosted by "Saturday Night Live" cast members Michael Che and Colin Jost. Although at times, it felt like watching a long episode of "Weekend Update" the show was overall very well done. Below are 16 of my top takeaways from this year's show.

1. Where were Michael Che and Colin Jost during the opening?

However, I'll forgive it since that opening was insightful, catchy and FUNNY.

2. The monologue was decent.

I think Michael and Colin did a good job, but it was political as to be expected nowadays. Also, I can't be the only one that wants an Obama version of "The Apprentice", right?

3. Chrissy Teigen's reaction when they flashed to her during the monologue was to die for.

When director Glenn Weiss proposed to his girlfriend in front of the world I think we all let out a collective "aw."

5. Someone won an Emmy for the Oscars.

This is actually how Glenn Weiss got on stage to propose.

6. Everyone should watch "The Marvelous Mrs. Maisel."

The show won 7 of the 11 Emmys they were nominated for in their debut season.

*and it's one of my personal favs…so watch it! (now streaming on Amazon Prime. Season 2 coming soon!)

7. What were Maya Rudolph and Fred Armisen doing?

8. Did you hear John Legend got an EGOT?

To be honest, didn't realize he had a GOT…

9. Of course, SNL won, they're stars were hosting…

10. All the reminders GoT won't be back for another year.

Love that it won Outstanding Drama Series and Peter Dinklage won for his role, but come on we still have another year.

AKA the LOVE OF MY LIFE Landry Clarke from "Friday Night Lights."

14. Regardless of your political/religious views, I loved the support for Michael Che’s mother.

15. The fact that Alexis Bledel, Milo Ventimiglia, and Amy Sherman-Palladino were all reunited at the Emmy’s for different projects.

16. It actually ended on time…

The Type Of Tea You Love WAY Too Much To Spill, According To Your Zodiac Sign

It's just your cup of tea.

For me, chai isn't just what I drink — it's a core part of who I am. Sure, I'll switch it up every now and then with a cup of English Breakfast, Earl Grey, rose, or Darjeeling, but I always come back to chai.

Nearly every tea lover has one tea they repeatedly drink and go back to, whether it's a daily morning ritual or an afternoon pick-me-up. One of my good friends has almost eight cups of jasmine tea every single day — she drinks more tea than water, actually.

Where Are You Now? Tell Us How Odyssey Helped You Get To Where You Are Today

We want to hear from you for a chance to be featured!

If you were formerly an Odyssey creator, like Tatyannah King or Julia Waterbury, we want to hear from YOU about how your creator journey helped you get to where you are today.

Going To College During COVID-19 Has Caused Some INTENSE Burnout, And It's Not Just Me

Graduation doesn't even feel like the light at the end of the tunnel anymore.

When my college announced that we would be having the fall 2020 semester on-campus, I was pretty excited. After six months of living at home with my parents with nothing to do, my study abroad trip in May canceled, and my 21st birthday plans down the drain, going back to campus meant that I would regain some of my individuality and see my friends again. But since we've returned, it has not been as fun as I had hoped my senior year of college would be.

If You've Slipped Back Into Self-Harm During COVID-19, I Understand And I See You

You matter and you deserve to feel your best.

Content warning: article discusses self-harm and may be triggering for some individuals.

Because being well-rested is crucial to your overall health.

I often can't sleep at night due to a slurry of medical issues, both mental and physical. Often times I fall asleep between three and five in the morning. I know there are many others just like me, so I did some research to benefit us all. Here are 6 things to do when you can't sleep.

When asked about cancer awareness, the things that come to most of our minds first are pink ribbons.