When I Don't Support My Sisters
Odyssey

When I Don't Support My Sisters 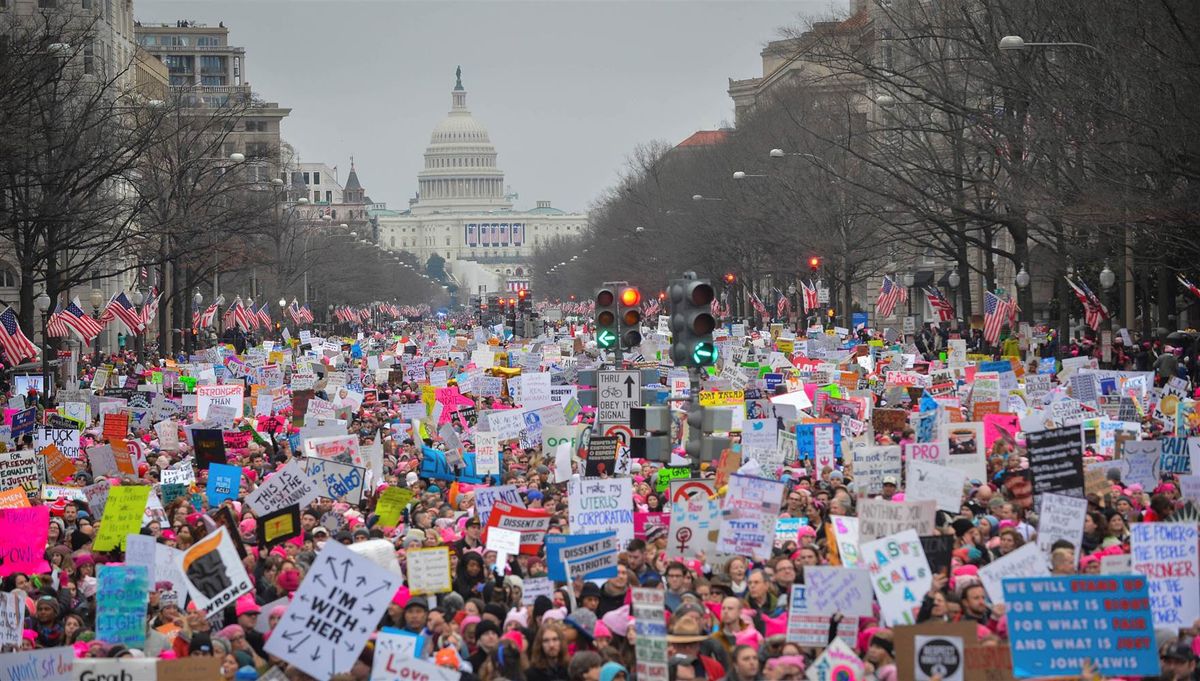 Political debates were heated. Bernie supporters were noticeably upset. Hilary Clinton and Donald Trump were supposed to be having intelligent arguments that seemed to mostly consist of out-shouting matches. Jill Stein was gunning for raising money to recount votes in an effort to combat Russian-influenced or otherwise-influenced voter fraud. I heard a lot of talk about voting third party “to rebel”…and we all know how that ended up.

I attend an emphasis-on-liberal liberal arts college, but was still in connection with my old school, an all-girls Catholic high school. I’ll admit I got caught up the fervor of rooting for our potential “first woman president!” and though I voted for Bernie in the primaries, I generally understood the importance of not splitting the vote, so I voted for Hillary in the general election.

Again, we all know how this worked out.

After several weeks, Trump came out with his cabinet appointments. And someone, in the grand sphere of the internet who figured out how to get a decent amount of attention on social media (I forget who), decided it was a good idea to clump Betsy Devos, Ivanka Trump, and Melania Trump in with Hilary and say that if we, Hilary’s voters, did not root for these women, then clearly we were hypocrites for doing the whole “women must support each other” thing for only Hilary. “Give them a chance,” they said.

At risk of the Lord blasting me with lightning (please, He knows me already), I’d like to point out that this is not the first time I’ve heard this sort of message. A variation of it was popular in my high school: “We must support our sisters. We must bring each other up instead of tearing each other down.”

To be clear, this is by no means a bad message and no, no one from my school brought up the warped variation of it in favor of the aforementioned women…as far as I know. In this dog-eat-dog economy and this country that still really needs to work on being more gender inclusive, racially inclusive, religiously inclusive, and every other kind of inclusive, some help from your fellow humans should always be welcome.

This message was basically my high school’s motto, for all intents and purposes.

As a person with anxiety, especially, I felt the genuineness of the message. “Real” women would be supportive or at least mature when I was struggling, and I was 100% for lifting up other people because I knew no one really wants to be left alone on the sidelines and struggling.

It felt really dirty that someone would throw my school’s motto at me like an unwanted crucifix. That was my motto, too. No one should get to do that.

In light of Illinois having a Republican woman running for governor who seems to think helping and acknowledging LGBTQ people is bad and Trump calling Elizabeth Warren “Pocahontas,” I am really questioning the whole “support my sisters” thing.

Because sometimes, I have realized, I definitely do not want to support my “sisters” – as a morally sound person. Not that Elizabeth Warren should have been called Pocahontas – she shouldn’t have, and that still makes me angry for all cultures and genders involved – but just this idea of all women being my sisters. That I shouldn’t disagree with their decisions and lifestyles on the grounds of “family.” It must be more complicated than that.

Things I do agree with:

We should not tear down a woman because she was cheated on in the past.

We should not tear down a woman because some extremist in her culture, religion, or race in another part of the world decided to commit a horrible crime.

We should not tear down a woman if she made mistakes in the past and is trying to improve herself.

We should not tear down a woman because she had or still has an illness of any sort.

We should not tear down a woman for not being cis-gendered.

We should not tear down a woman because she came from a “bad” (by any definition of the word) family or a bad place.

We should not tear down a woman for struggling with school or finances.

We should not tear down a woman for putting her motherhood first.

We should not tear down a woman for showing emotions.

These truths I hold to be self-evident, because in this way we women were all created equal (see what I did there?). To tear down a woman for something she cannot help is just dirty and cruel. As for the school and money part, what human on Earth hasn’t, at some point, been short on money or gotten a bad grade or struggled to understand an academic concept? Okay, possibly don’t answer that, but you get my point. No one is perfect. Struggle makes us human. Emotions also make us human, and are completely healthy.

On the other hand, things I do not agree with include supporting a woman who does not care about the negative consequences of her actions on the people she is supposed to serve.

When Trump was first elected and put Betsy Devos in office, my only objection to her was that she favored charter schools and had never been through or put her children through the public education system. She has now continuously not addressed the tragically growing amount of school shootings that have affected too many educational institutions, instead opting to either not say anything or going to visit only for a photo opportunity. She also seems to have participated in creating recent budgets that have drastically cut funding to public education.

Ivanka Trump was declared – unconstitutionally, I might add – an advisor to the president, despite her status as family, and has been sent on multiple diplomatic missions to foreign countries that seem to end in little gained for our country and something always gained for her clothing business. Something just seems really off about a fashion mogul seemingly using her presidential job to further herself. I’m not even mad about her not being able to influence her father; I just don’t understand why government money is seemingly being spent on a fashion company.

Sarah Huckabee Sanders – daughter of Mike Huckabee and no relation to Bernie – for some odd reason is content with her job of covering for the president, and I don’t understand it. No, I’m not going to use her facial expressions as proof of guilt. I’ve seen perfectly truthful people whose eyes do the same thing. It seems unnerving that someone could be comfortable pretending that a corrupt person’s point of view is the truth for so long, especially given Trump’s latest deeds as president. The same goes for the similar case of Kellyanne Conway, who was Trump’s campaign manager and now is famous for the term “alternate facts” and for promoting Ivanka’s fashion line while in the capacity of working for Donald Trump.

Omarosa Manigault remains a wild card for me. I can see a person being grateful to someone who gave them a big break in their career. I can also see how journalists or social justice leaders would take advantage of the juxtaposition of a black woman with Nigerian parentage willingly working for a racist, sexist, and anti-immigrant boss and go off-topic in interviews. I cannot, however, quite see why a person would buy into a hateful agenda, why she would work as his aide for this long, or why she would only be speaking up now - unless she believes that will somehow get her out of the Mueller investigation, maybe. I can’t figure her out any more than I can figure out Ben Carson.

As you can see, I don’t always support my “sisters.” I also think it’s a bit unfair to call them my sisters. I would think “family” would care for each other’s well-being, and these women do not seem to really be doing that for me.