I Studied Beetle Sex And Some Really Hot Flowers
Odyssey

I Studied Beetle Sex And Some Really Hot Flowers 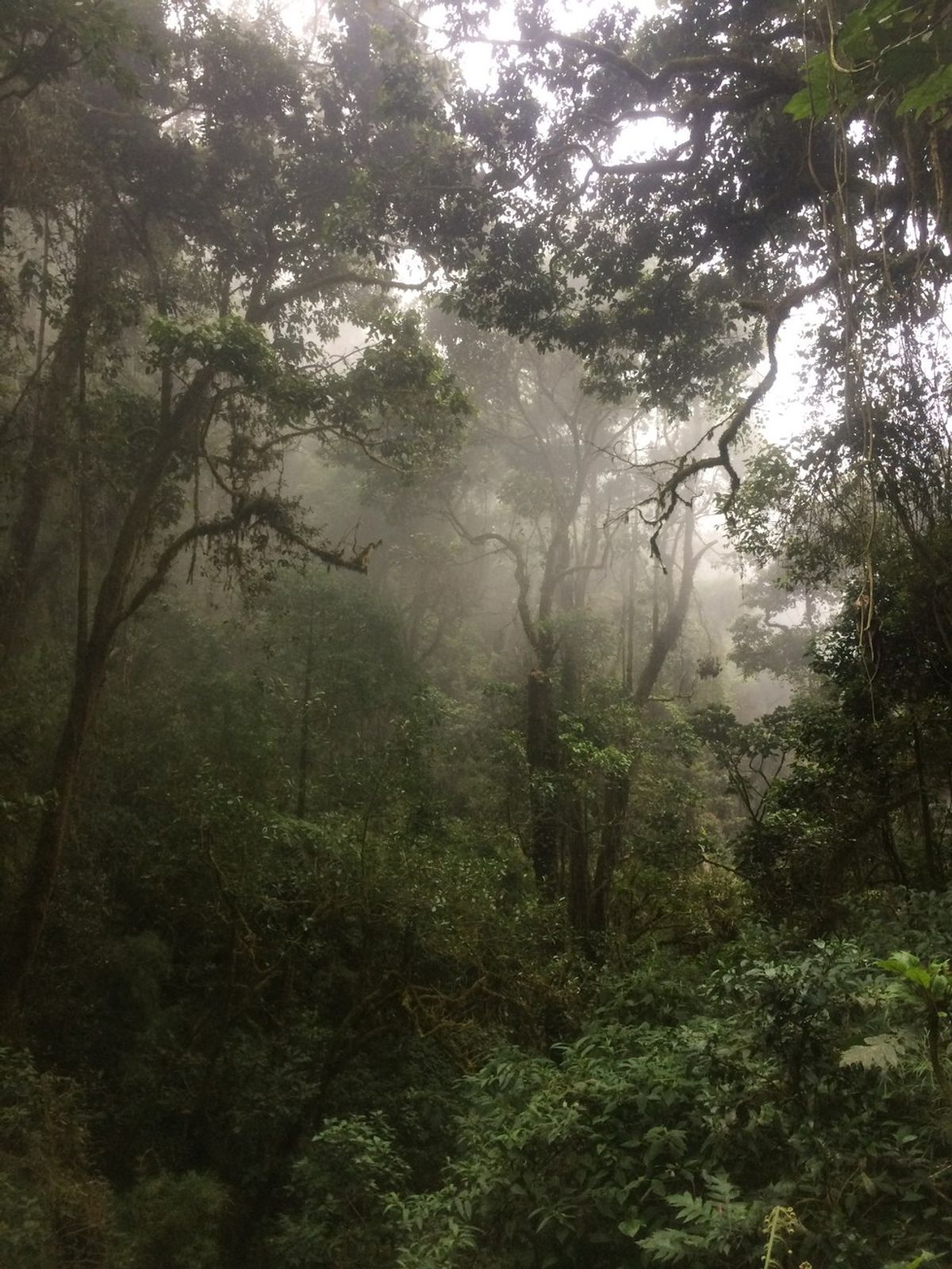 My week was all about beetles, which I bet was different from most of the people reading this (if any). I’m also writing this at a beach field station where I can currently hear the ocean outside.

This week began with a stretch of internet-less-ness (but many other things you could never get anywhere else) at Cuerici Biological Field Station. We arrived last week at the top of a misty mountain, and took a (mostly) downhill hike through the clouds. You see, we found ourselves at 2,500 meters (about 8,000 feet) above sea level in a true tropical cloud forest. We were walking through the clouds. It also looked like a horror movie set, which we kept noting as we stumbled through the rocks and felt ourselves chilled for the first time since setting foot in Costa Rica. After a few kilometers, we found ourselves at the field station. It’s a big wooden building situated at the top of a rainbow trout farm owned by a man named Don Carlos. He speaks only Spanish, but even if I couldn’t understand him, his sweet demeanor would be obvious. He speaks in a soft but clearly informed voice, and seems willing to help you in any way he can. After he gave us a general orientation about safety at the station (don’t fall off of trails etc., which I paid special attention to after we learned that a previous student had pierced his scrotum after a fall into some sharp sticks), we sipped tea quietly on the porch and absorbed the general splendor that this place embodied. That night, I snuggled into bed under three blankets (while still wearing all of my clothing including pants and a sweatshirt), and still woke up three times in the night from the cold. Nowhere else in Costa Rica was like this, for many reasons.

The next morning, Don Carlos took us on maybe the most difficult and most beautiful hike I’d ever been on (though I’m not much of a hiker, so that’s probably not saying much). He walked with two walking sticks but was still much more competent than I (in hiking and in general foot placement – I nearly fell and nearly twisted my ankle several times), and much faster. He grew up in this forest, going out to fell trees with his father since he was a boy (though now he’s learned a much more conservationist way of life). He’s definitely used to the altitude, which is more than I can say for myself. We hiked from secondary forest to primary forest (terms that refer to the succession of trees that grow there – primary forest are the trees that grow first on bare land, and may therefore be hundreds to thousands of years old, while secondary forest encompasses the flora that take root after the primary forest has been cut down, usually at human hands. Once this happens, the same primary forest composition will probably never happen again). Don Carlos pointed out various birds and plants, like the great oaks (two different species) that grow in this forest and almost nowhere else in Costa Rica. They take decades to grow to maturity, so that the rare little sprouts (only a couple meters tall) we see in the ground have been growing for 20 years. With such longevity comes extreme vulnerability, as they can hardly grow at the rate at which they are cut down. Don Carlos was especially adamant about this as he gently patted the oak behind him. He seems one with the forest, a much quieter Tom Bombadil. As we climbed, I found myself sweatier than I ever thought possible, especially given the ambient temperature. We stopped at various plants, searched the sky for quetzals, but no rest stop was long enough to let me recover from the altitude. I forgot all my exertions when we reached the lookout, though. Don Carlos just stood to the side, letting us take it all in. A rickety wood deck was built on an outcropping surrounded by grasses and bushes of long, purple flowers. We saw bees buzzing to their own tune in front of us, and, beyond, a vast expanse of mountains and clouds, stretching almost far enough for us to see the Pacific Ocean. Don Carlos pointed out a tiny white speck in the distance. “A waterfall,” he said in Spanish, “a 12-day hike from here.” Apparently, Don Carlos has made some of his living bushwhacking his way through the Costa Rican wilderness, surviving by only his machete and some dry meats. He continued to keep us in awe of him. We made several more stops on the hundreds of meters back down the mountain, including a brief munch on some edible flowers, but I was relieved when we reached the station just in time for lunch. And so began our adventures in Cuerici.

Things were just ramping up on the academic front. After lots of fission and fusion, research groups formed, as they always do. This time I found myself with some of my favorite people on the trip, whose interests didn’t necessarily align with mine, but who projected such optimism and enthusiasm that I couldn’t resist working with them. We began with the idea of thermal rewards. It’s a theory that flowers form structures to magnify or absorb radiant energy from the sun, causing them to heat up, to the benefit of ectothermic insects that rely on the environment for their heat. The insects get a heat boost, allowing them to feed more, move more, and potentially reproduce more. We originally wanted to compare the thermal rewards of flowers at two elevations, both in the garden at the station and at the lookout. However, after a long and arduous repeat hike to the top (during which I realized I had blocked out most of the pain from the previous hike), we realized that none of the flowers that occupy both elevations offer thermal rewards. It was disappointing to some, and secretly delightful to others who didn’t want to do the hike again, despite its beauty (me). So we switched our focus to the nonnative plants in the garden that do offer thermal rewards, which, interestingly, seem to be the only ones that do so (the native Costa Rican plants didn’t seem to). We looked at the presence of a native species of beetles on these flowers. Don Carlos said the abundance of this species had increased over the past few years since he introduced the plants, so we examined the relationship between the native beetles and nonnative species. And here’s what we found: of the three species of flowers we tested, at least one was far hotter than the ambient temperature (a bunch of our thermocouples – essentially hyped up thermometers that record all day – failed, so we could only get a full data set for one species). Also, through some experimental manipulations that became lovingly known as the “sex trials,” we looked at the number of beetle matings at different temperatures. The numbers were drastic – just a few degrees difference caused matings to skyrocket from 4 (in 10 minutes) to 19 to 35 (keep in mind, this was number of matings between 14 total indivduals). Clearly, mating increases with temperature, which presumably benefits the beetles (though not always. This part is a bit complicated to explain in the blog, but basically this mating strategy might be better for the males than the females). We also found that there was a greater abundance of beetles on hotter flowers, and that there was a greater number of transitions between flowers – and therefore, potentially, more pollination – in higher temperatures, a benefit to the flowers. So, overall, we emerged with a fascinating study sort of by accident. The beetles and their sex lives just fell into our laps.

We left Cuerici, and I was sad to leave the mist and Don Carlos, but I'm looking forward to some of our own heat at the next station on the Osa Peninsula.