Carrie Fisher's Death Inspires Frank Discussions About Mental Health
Odyssey
CurrentlySwoonLifestyleHealth & WellnessStudent LifeContent InspirationEntertainmentPolitics and ActivismSportsAdulting
About usAdvertiseTermsPrivacyDMCAContact us
® 2023 ODYSSEY
Welcome back
Sign in to comment to your favorite stories, participate in your community and interact with your friends
or
LOG IN WITH FACEBOOK
No account? Create one
Start writing a post
Entertainment

What we can all learn from the late "Star Wars" hero. 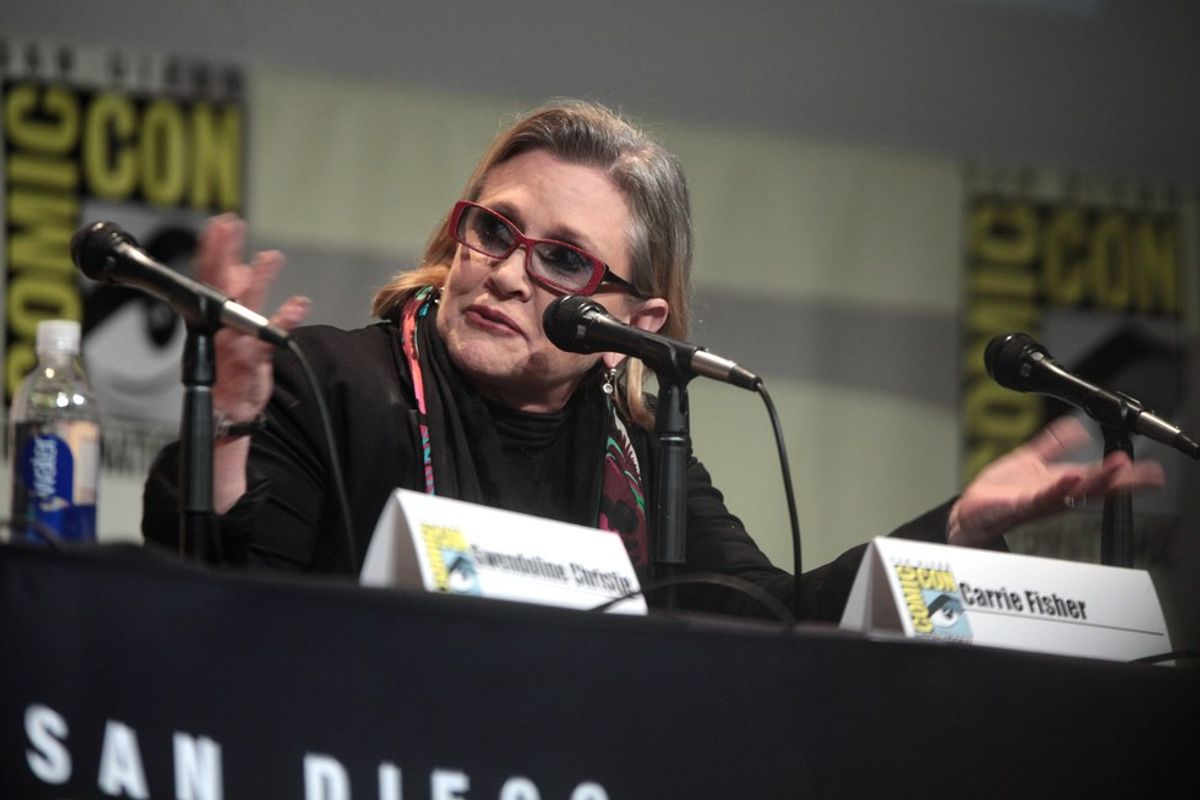 Carrie Fisher, the beloved actress, writer, script doctor and mental health advocate, died December 27, 2016 to the despair of hundreds of thousands in the "Star Wars" fandom and beyond.

Throughout her life, Fisher was known for her candid wit and refusal to bury her true feelings in political jargon. That carried over to the way she talked about her own experience with mental illness and addiction, a subject often considered taboo in general society, especially when coming from celebrities as big as the Princess Leia actress.

“I’m very sane about how crazy I am,” Fisher is quoted as saying.

It perfectly captures her general attitude about her mental illness. Yes, she struggled daily in a battle against her own mind due to bipolar disorder and drug addiction. Yes, sometimes she lost. However, she wasn’t going to hide it or let it keep her from getting what she wanted out of life. She was strong while being unapologetically mentally ill; she didn’t have to “defeat” depression to be a success story. She was both incredible and depressed.

Considering the icon Fisher was for the mental health community, it is worth examining why her candid nature was so refreshing. The truth is, mental illness is still heavily censored as a “no-no” topic in general conversation.

According to Newsweek, one in five Americans report that they have experienced mental health stigma, which sets them apart from general society, including from their family and friends. They are assigned to the metaphorical “mentally ill” box, where they face discrimination and prejudice surrounding something as innate as sexuality or ethnicity.

Due to the fact that mental illness is so stigmatized, people who are open about their struggle can be isolated, and experience shame, blame, hopelessness, and distress, according to a report from Australia's Mental Health Commission.

People can be forced to hide their mental illness and have trouble reaching out for help from their peers because of the way it is viewed by society at large. One of the most enduring stereotypes is that mentally ill people are dangerous, especially those suffering from “schizophrenia, alcoholism and drug dependence,” writes Psychology Today. Another is that those suffering from certain disorders, including depression, eating disorders and addiction, are not worthy of sympathy because their misery is their own fault and doing.

And with so much working against them, here was Carrie. Completely unwilling to hide the fact that mental illness was an active, constant presence in her life, as it is for so many others. There were kids in the "Star Wars" audience who looked up to her as their iron-willed, courageous princess/rebel leader and realized that she wasn't giving in and hiding the most vulnerable parts of herself. She was putting them up for everyone to see in the hopes that someone watching would be inspired to love themselves as fully as she seemed to love them.

It isn’t like there’s a lot of places for those suffering from mental illness or addiction to turn to for comfort, either. Stigma affects their life beyond direct interactions; representations of them in major media can also be toxic. For example, anytime there is a mass murder, the solutions are either terrorism or mental illness. This can drive people to believe anyone with a mental illness is dangerous, unpredictable or can easily be treated if they wish to be so.

Those stigmas don’t just cause hurt feelings. People are driven away from seeking treatment because they don’t want to be labeled as "crazy." Some people have admitted to crimes they did not commit rather than disclosing that their alibi is that they were enduring a stay at a mental hospital, according to a report from Psych Central. People just aren’t allowed to talk about it.

That is why Carrie Fisher mattered. She was one of the most well-known, celebrated actresses of her time, a part of one of the most successful franchises to ever take to the box office. And she was willing to expose herself and her own mental health battle in order to ensure that the generation to come after her could breathe a little easier and talk a little bit louder about the stigma of mental illness.

“I am mentally ill. I can say that. I am not ashamed of that. I survived that, I’m still surviving it, but bring it on. Better me than you.”