Stop Saying "I Could Do That" To Modern Art
Odyssey

Stop Saying "I Could Do That" To Modern Art

Treat the style of art with the respect it deserves. 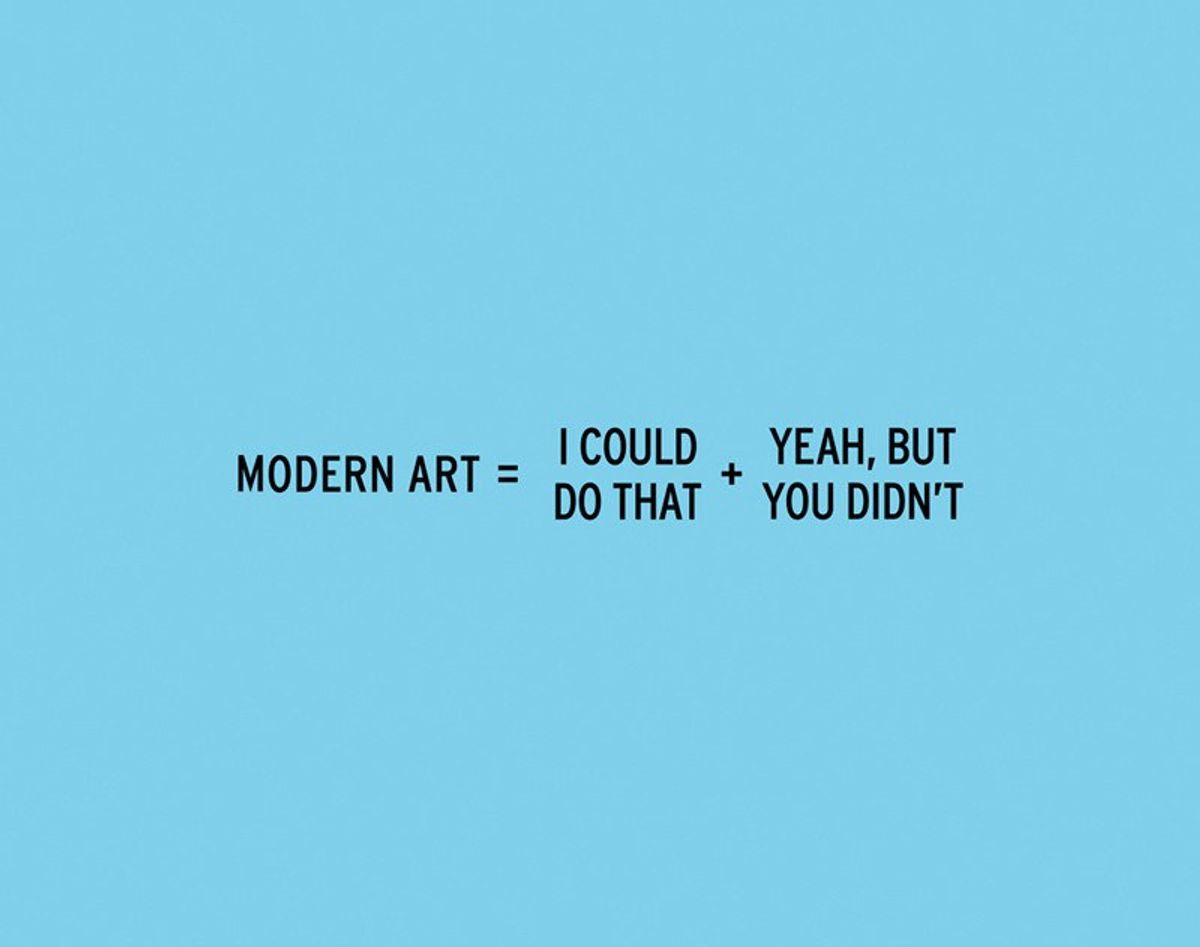 With all of my trips to art galleries and museums throughout the years, I have noticed a common theme. People tend to appreciate the classical art more than modern art. A quote that is frequently heard in the Museum of Modern Art is “I could do that.”

“I could do that. A preschooler could do that. This takes no skill.” A short answer is that while you could have created that piece of art, you didn’t. But that doesn’t explain why those comments are wrong and giving the wrong impression.

While a simple answer is best at the moment, a more in-depth answer is necessary. Creating the art is only one simple step in the large process. From brainstorming different ideas, taking in the respective audience and location, to gathering supplies, there are more steps than people think. Once those steps are done, it is time to physically make the art. Once it is made, it is not over. The piece has to be titled, given a description and shown off. Usually, there will be multiple attempts to get a piece in a gallery or museum, and failure must be faced. Criticism with be extremely common, from in person, to online, there may be comments putting the artist or work down.

So no, it's not a simple as one may think.

A crucial part of any physical piece of art is the idea. Art is meant to evoke feelings and the ideas usually keep that in mind. As long as art elicits a response, it is doing its job. If you spend time criticizing it, you are taking time out of your day and giving it to the artist. If you find yourself thinking about it, then there was a piece of that art that was striking enough to remember it. Just the simple memory of it is honoring the piece. You don’t necessarily have to like art for it to be effective. Being repulsed, confused, or shocked is actually the goal of some artists. As long as feelings are being expressed, it is effective.

As far as art that is ready-made or an installation, as long as it makes the viewer think, it is working. Duchamp's famous "Fountain" which was an upside-down part of a urinal signed "R. Mutt," was faced with extreme criticism. It was diminished for being already made and just seemingly titled. But the piece made the viewers think. It allowed them to see a part in a different environment and view. To Duchamp, that was more than enough.

While it is very common to criticize a painting or sculpture, people are far less likely to criticize a song or play. While a song might have a simple melody, or it repeats the same lines frequently, it is not thought of as less than any other song. In fact, its unique qualities may be positive attributes. The more simple a song, the easier it is to sing along. Fashion collections that feature simple shapes or classic colors are often praised.

Most different styles of art evoked the same response at the time. Claude Monet was constantly criticized for having “unfinished” and “ugly” paintings when he founded the French Impressionism style. Edouard Manet, the artist behind “Olympia” and “The Luncheon” was faced with extreme criticism for lack of shading and old approaches to art. Now, one of Manet’s paintings is on the list of the highest paid prices for a piece, at over $65 million. The criticism they, and many others have faced just proves that change is often met with opposition. The modern art style is still the one that is common today, and the opposition is very apparent.

I have a challenge for all the people that still want to walk into a gallery and say “they could do it.” DO IT. Go ahead. Either try to create a new idea and style or copy a classic. A Piet Mondrian composition painting might look easy at first, but copying it down to the measurements and brushstrokes will be much harder than you might think. If you find that you can recreate a piece or come up with your own, then you should take pride in that. Congratulations, you stepped out of your boundaries and experimented. If you find that you cannot make your own piece of modern art, then it is time to respect those and can and do.

Treat others with the respect they deserve and don’t say anything if you don’t have anything nice to say.