Star Vs. The Forces Of Alleged LGBT Censorship
Odyssey

Star Vs. The Forces Of Alleged LGBT Censorship

An episode of "Star vs. the Forces of Evil" may have been pulled because of a few same-sex background kisses. 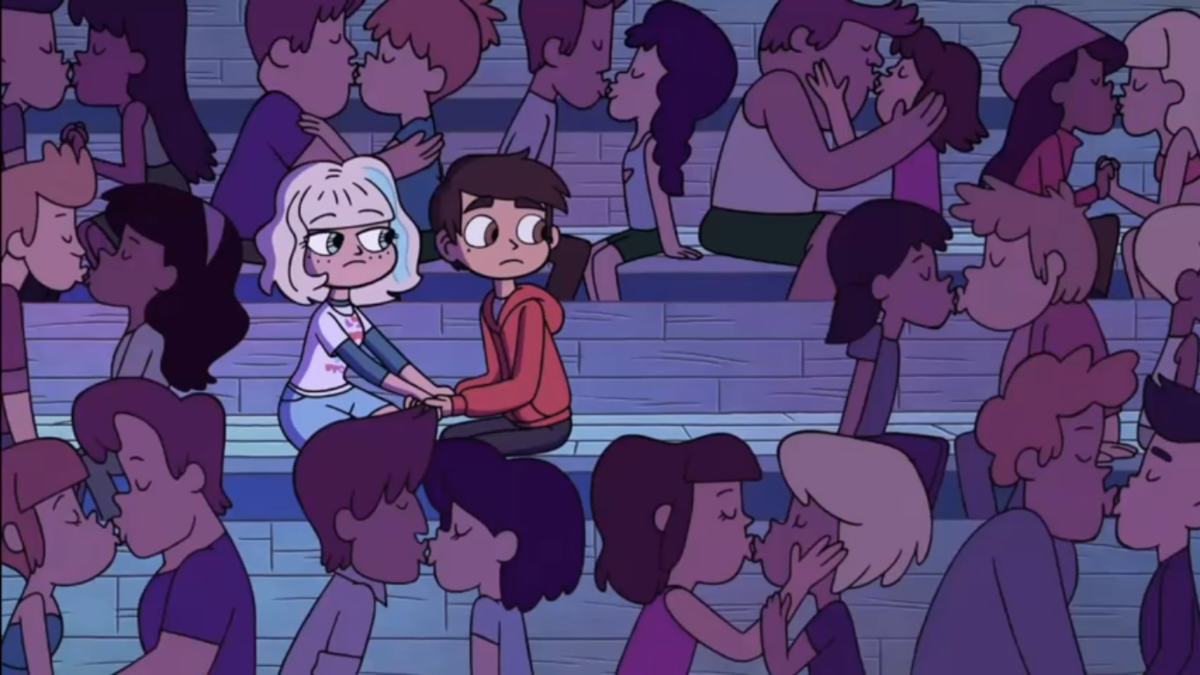 Last week some YouTube content creators in the cartoon community reported on something troubling. It appears that an episode of the Disney show, "Star vs. the Forces of Evil" is being censored.

At the time of those YouTube clips episode 20 from season two, "Collateral Damage/Just Friends" were not scheduled to air on television even though the other late season two episodes were. More cause for concern was that the episode was pulled from the Disney XD website, which let viewers see the latest few episodes. The list jumped from episode 19 to episode 21.

While there is not any confirmation yet as to why, the content creators speculate it is because of complaints of a few same-sex couples kissing in the background during one scene of "Just Friends."

I also must note that "Collateral Damage/Just Friends" is scheduled to air in the US tonight, yet time will tell if the episode is an edited version, or if the episode will ever return to the Disney XD website. While the episode is currently listed on third-party sites such as Hulu and iTunes, this may change after a lengthier pulling process.

The episode may have returned on the schedule through coincidence, or perhaps because its temporary loss was from another factor having nothing to do with the background kisses. Yet, another explanation is that fans tweeted enough support for the episode with #JusticeForStar at the suggestion of some of the YouTube creators mentioned above.

Because none of this is entirely confirmed, and the episode may air unedited tonight and may return to the website, I'm not going to spent this article reprimanding whoever's alleged decision it was to give into alleged homophobic pressure. I'm not going to mention how this doesn't make sense for the television side of Disney to do right after they had a canonically gay character in an internally-released film and refused to censor an "exclusively gay moment" in Malaysia.

I'm not even going to mention that cartoons have a lengthy process from tons of people putting in their hearts and souls into the process, and it's unfair to remove an episode full of that work just because a few nameless background characters kissed. The last thing I won't mention, is that "Just Friends" was a plot-filled episode, full of character development, and cutting it would be confusing for the audience that missed the episode.

Now, you might be wondering, why not just edit the gay background kisses out? The rest of the work from the episode will stay in tact, and the plot will still make sense, right? The controversy will be gone and the show will go on, right?

That is a terrible idea, and that is what I will mention for this article.

Representation matters, and yes, even in something as seemingly insignificant as a few background kisses.

I was all caught up "Steven Universe," (which is a fantastic series, you should definitely watch if want LGBT representation), and was shopping around for a new cartoon to watch. Granted "Star vs. The Forces of Evil" was vaguely on my to-watch list, because I had seen a few episodes here and there, and marveled at the voice of Eden Sher, who is also Sue Heck. Knowing I would enjoy the show more if I started from the beginning, I wasn't super involved.

What finally pushed me into watching the show with full commitment? I was sitting in my dorm bed, scrolling through whatever social media site and saw a headline along the lines of "Disney airs its first same-sex kiss."

I wanted to read all about it, but realized I could just watch the series and find out for myself. There is hardly any LGBT representation in the media, so yes a few gay background characters kissing was enough for me to watch an entire show. I'm not even the target audience for Disney XD, and it's even more important for younger viewers to see that LGBT relationships are normal.

Now at first I was foolish enough to think the "first same-sex kiss" was going to be from a main character, but I realized that probably wasn't going to be the case once I saw where the show was going.

Still I was not disappointed. "Star vs. The Forces of Evil" is a fantastic show, and I'm glad I tuned in.

Also, the concert kisses people were allegedly up in arms about wasn't even the gayest thing to happen on the show.

One character Starfan13 openly and not-for-any-other-interpretation admits she has a crush on Star. While Star doesn't reciprocate, she doesn't act like it's the end of the world, and they remain close friends. There are also lots of innuendos pointing towards Jenna being bisexual... I mean she even wears a beanie, so come on.

There are even romantic undertones from Marco and Star's ex-boyfriend, Tom.

Then of course, yes, after all of this subtext (and basically just text with Starfan13) I was happy to see the gay background kisses among the straight couples, saying "hey, this is normal, we're just like any other couple."

Representation matters. Whatever profit my viewership earned for "Star Vs. The Forces of Evil," and what overall-insignificant advertising I've done on Pinterest, Tumblr, and show recommendations was because of those gay background kisses.

Trust me, Disney, when I say that the background kisses did more good than harm. Don't let the homophobic screams be heard. They may sound louder than the fans at times, but they will not affect the show more than we do. Let this article be a voice to counteract those screams. This episode was important to us. #JusticeForStar.