Students from The University of the Arts are on a mission to beautify an empty eyesore in the middle of Center City. 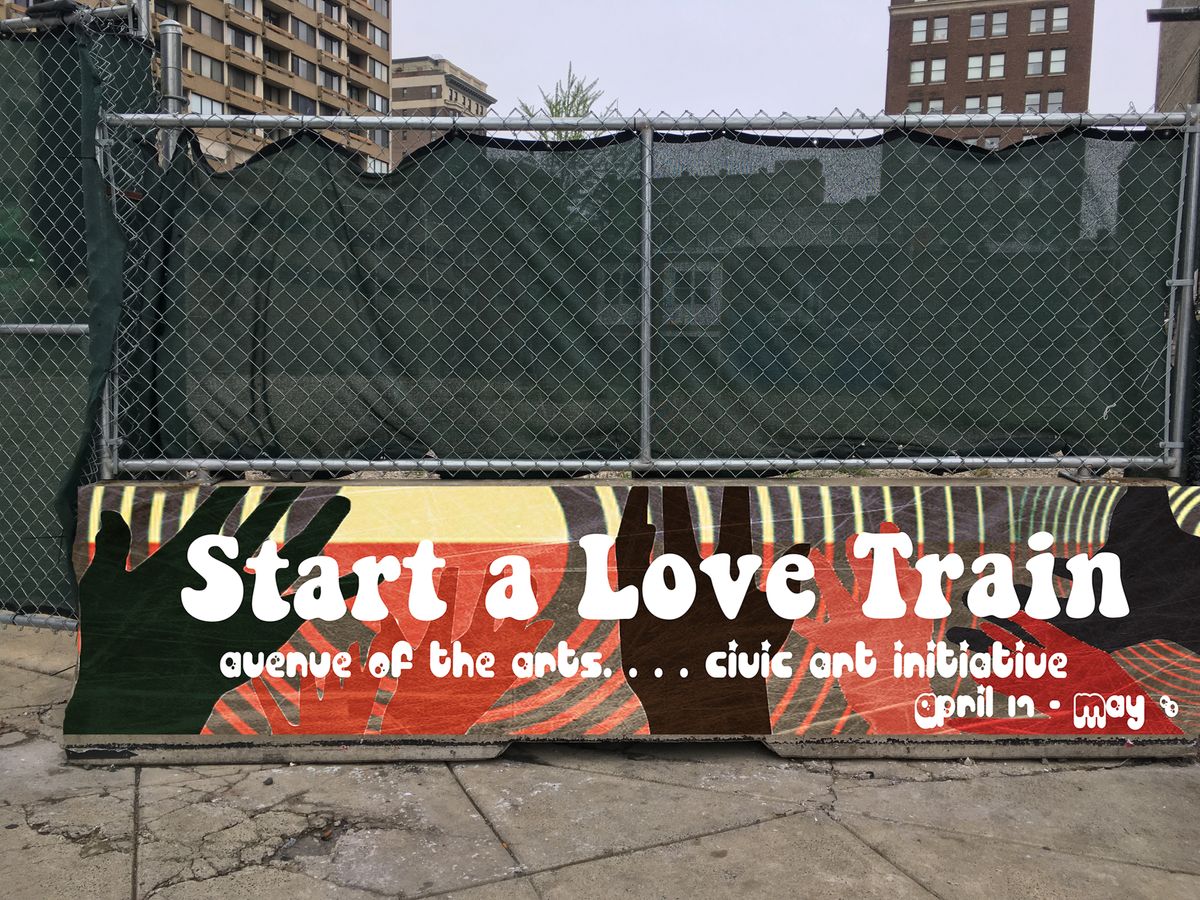 At the corner of Broad and Spruce streets in Philadelphia, there once stood a building known as Philadelphia International Records. It was established in 1971 by Kenneth Gamble and Leon Huff. Starting in the early 60s, the duo earned over 100 gold and platinum records. The label recorded talent such as The Jackson 5, Teddy Pendergrass and The O’Jays. The mega hit “Ain’t No Stoppin’ US Now” was also recorded in 1979 at the studio. The label’s artists would become known by songs with emotional storytelling and lush string arrangements (often provided by the Philadelphia Orchestra). Philadelphia International Records was the birthplace of Philadelphia Soul, which created the bridge to Disco and dominated the sound of the mid 70s.

The building was torn down in April of 2015. What remains is a pit of dirt and debris surrounded by concrete barriers and a chain link fence.

This pit is owned by the Philadelphia Industrial Development Corporation and Dranoff, while the barriers surrounding it are property of the Philadelphia Streets Department. Since the Philadelphia International Records building was torn down, no official plans to build something in its stead have been made by the owners.

What has resulted is a prolonged eyesore in the midst of an otherwise colorful and beautiful part of Philadelphia. This area is not only a hub of arts and culture for Philadelphia residents, but is also a major tourist destination.

Recently, a group of students from a Collaborative Studio class at The University of the Arts decided to beautify the sad site. Appropriately, they have titled their exhibition "Start a Love Train." This title signifies the trainlike layout of the barriers while paying homage to the site's groovy history.

A note from the artists:

We, an anonymous collective of Center City artists, are proud to announce an art exhibition to mark the two-year anniversary of the demolition of a historic block of Broad Street which led to the creation of an unsightly barrier wall and fence at Broad and Spruce Street.

We have, as artists, taken it upon ourselves the social and cultural responsibility to contribute to and nurture an environment that is more engaging, beautiful, inspiring and welcoming than the blighted block which was previously on display. This barrier, left neglected, has become a blank canvas; this barrenness naturally invites us, as artists. In light of the inaction we have witnessed, we feel a responsibility to engage, improve and inform our community.

We understand that this may be misinterpreted by some as vandalism, but our goal is simply to beautify a blighted strip which has been thrust upon this neighborhood without its consent and has been existed as a symbol of neglect for the past two years. We harbor no ill will towards those responsible for the eyesore this space has become. We are not damaging the barriers, nor using permanent means to mark them, but offering short term relief to what has become a long term problem. We simply wish to improve the walk we and thousands of others make up and down Broad Street every day. It is our hope that by drawing more attention to this blighted block, we can increase the speed in which it will be dealt with.

The exhibition has yet to be installed. Several weeks ago it came to the artists' attention that Washington Square West Neighborhood Association had contacted the dean of the UArts College of Art, Media, and Design expressing interest in creating a similar installation utilizing the artwork of UArts students. Public art initiatives featuring student work have been met with much success in the past; for example, UArts students' designs served to liven up the large electric boxes that can be spotted on street corners in and around Center City.

Unfortunately, that renders these students unable to take further action until Washington Square West and UArts have cleared the installation with the owners. However, the class has submitted a proposal to the dean of CAMD asking that their artwork be considered for the eventual installation. It is their hope that in a few months, the lot at Broad and Spruce will become a beacon of soul once again.

Link to the a digital version of the proposed installation: https://m.facebook.com/vincent.feldman.9/videos/...