This film is not one to be missed. 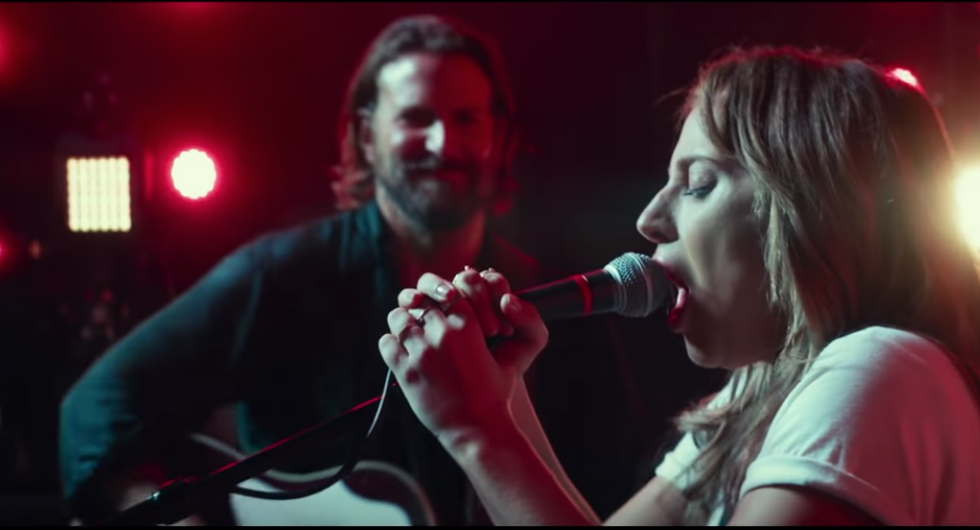 Not too many movies capture raw emotion and hit your right in the feels quite like the new film "A Star Is Born." From the second I saw the first trailer, I was hooked. I knew I had to see this movie the second it came out. Helmed by and starring Bradley Cooper along with Lady Gaga, it would be near impossible for this one to go wrong. And I can assure you, it most definitely does not go wrong.

Bradley Cooper commands the screen instantly with rough but surprisingly very good vocals and guitar skills. He effortlessly conveys such deep emotion with every word, making you instantly fall for his character, despite his heavy drinking and questionable behavior. He's charming, talented, and mysterious, the ultimate bad boy, yet has this kindness about him. You almost don't think you can like a character more.

And then Lady Gaga hits the screen.

I don't think anyone would be surprised to see the unexplainable, raw talent she brings to the movie. This role was made for her. She completely embodies Ali with every piece of her. With her first song, you fall in love, you're moved completely. And once she and Jack come together, you know it's going to be a roller coaster of emotions, but you don't care because it's just that good.

The casting across the board is spot on. Everyone brings their A-game and are so believable with every word. The highly emotional moments are broken up with surprisingly funny moments, particularly in the beginning when megastar Jack finds himself is a drag bar. And don't even get me started on this soundtrack. If you haven't already downloaded it, you need to. Right now.

One of the best scenes, in my opinion, in the whole movie comes toward the beginning when Ali and Jack sit down in a parking lot. Lady Gaga's Ali begins to softly sing "Shallow" and you see and hear without a doubt the talent she has. Just when you don't think you could be more impressed, she belts out the chorus acapella. This is the moment the two main character connect emotionally and sets up the whole rest of the movie.

As the film goes on, the songs get better and better. And as Ali slowly transitions into a more Lady Gaga-esque character, the troubles in hers and Jack's relationship begin to take shape. You root for these two, for their success, for their relationship to thrive. But as it goes on, you just know that isn't going to happen.

Fair warning, the ending is tough. It's emotional. You are definitely going to cry, so bring some tissues. The last 10 minutes, they're brutal, they'll leave you breathless. The acting throughout that tough ending, particularly from Gaga, is indescribable. It is so incredibly believable there's no way she won't be in Oscar-consideration for this one.

Overall, this is one of the best movies I've ever seen. Everything, the acting, the story, the music, it is just so good. I highly recommend you to see this movie. You will not be disappointed.