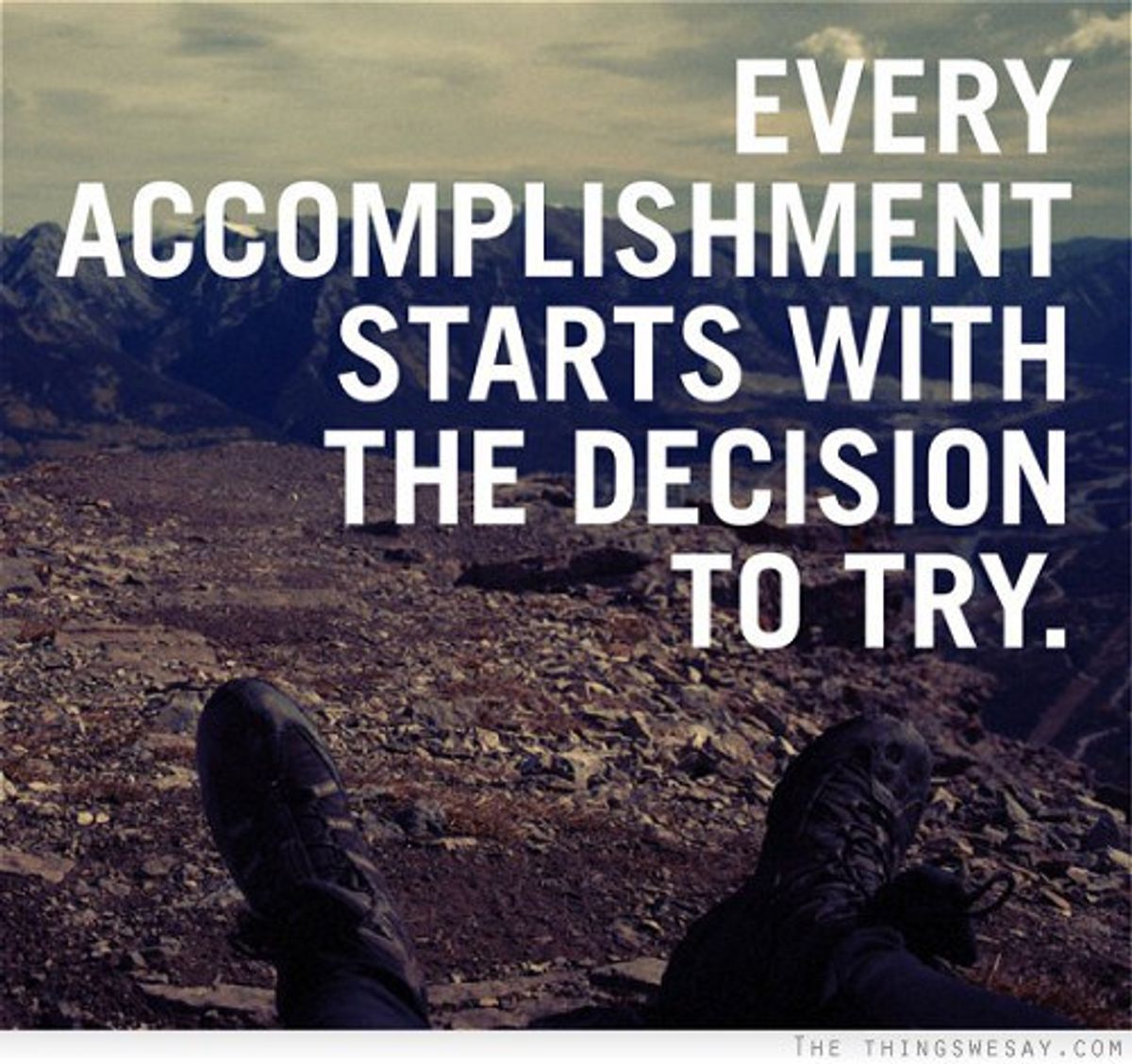 The Things We Say

College is one of the best things in the world because students generally enter college right after high school at 18 or 19 and are trying to create a better life for themselves and earn an education, and it allows people to re-invent themselves. You do not have to be the same person in college that you were in high school.

College comes at such a pivotal point in people's lives because it is the time when they are creating their identity, making important choices in their lives, and figuring out who they want to be.

As a college freshman, I had a list of things that I wanted to do, and thus far, I have achieved them all. One of the main things I wanted to do was better myself, and I think that by completing the small things I wanted, I made myself better. Every person strives to be better, so why not start the first year of college? So here is my list of things that I did/will do/recommend to better myself.

When I say commit to a hobby, I don't mean try it out a few times. I mean commit to learning something you always wanted to learn or doing something you wanted to do. It could be drawing, painting, wood crafting, gardening, or anything. Commit to it for at least a semester; you'll thank yourself for the calm it brings you or the skill you gain.

2. Join a club (For bonus life points, aim for a position).

Joining a club or organization on campus is a great way to better yourself; you're able to find share your interests and thoughts with people who have are into the same things as you. Joining a club also forces you to be social and gain a sense of community.

Having an on-campus job is not for everyone; they can be either very easy or very stressful (The latter in my experience). But with having an on-campus job, you are able to learn to manage your time and assignments in a more efficient manor, and you can often learn skills that you wouldn't necessarily learn otherwise. Your wallet will probably thank you, too.

Choose a show that you think you won't like or is totally foreign from what you usually like. I personally started watch "Bates' Motel" on Netflix, and I was totally surprised by how much I like it. It may sound like something small to do but by starting and finishing something, you feel a sense of accomplishment and also broaden your horizons a little bit.

Reading a non-fiction book is something that I suggest every person, college student or not, should do. Whether it is a bibliography, autobiography, a "how-to," or a lifestyle book, find one to read. Not only will you learn more about the world, but I promise you will feel like a smarter person for reading about something you can apply to your life.

This ties into starting a new show; choose something that you think looks really boring. It may be difficult to sit through, but commit and watch the whole thing. You may learn nothing, but you could also gain a whole lot of knowledge.

7. Make a list of what you want to do your second year.

8. Decide a major if you haven't already.

A lot of students come to college without declaring a major, which is completely fine. Most students don't decide until their 2nd year of college because they haven't identified who they are and what they want to do in life. If you have started done the path of figuring out who you are and what you like, try to decide what you want to do. If you take a class that you really enjoy and could see a future in, take another one to really be sure and help you identify a major or majors. You can always change your major later if you decide another major is right for you, but at least by declaring a major or having an idea of a major allows you to plan your classes so you can graduate in time.

This isn't a comprehensive list, it's not only for freshman, and this may not work for everyone. If you're bored and looking for something to do (or simply procrastinating), try something on this list. That feeling of accomplishment, even if it is a small feat, can carry through and be motivation to take another step towards something you don't want to do.