Love your sisters and love yourself. 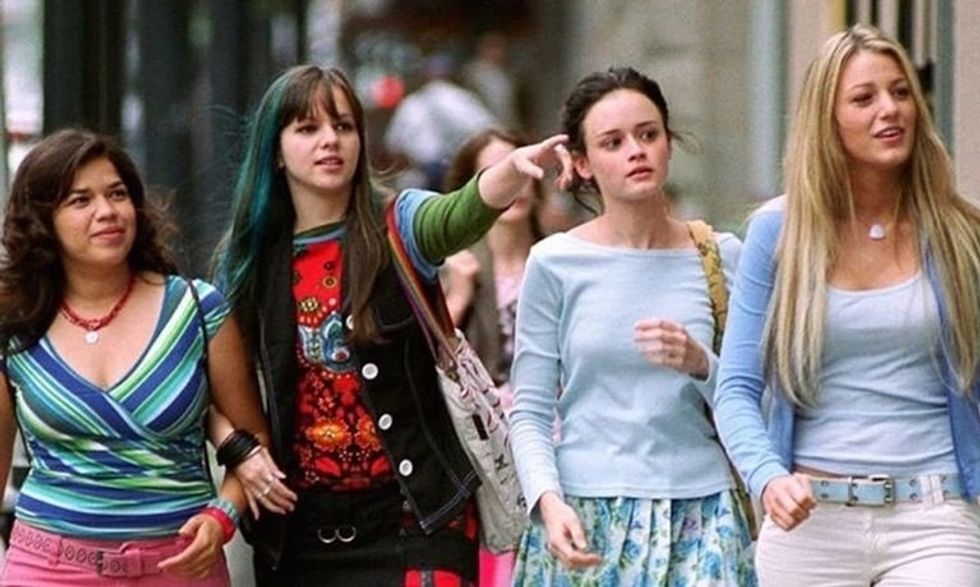 If there were a book equivalent of comfort food, The Sisterhood of the Traveling Pants series would be it.

The fourth book, "Forever in Blue", perfectly encapsulates the feeling of your first year away at college.

1. You get the freedom to focus on what you like

Lena took a huge step in choosing to study art even though her father disapproved of it as a profession and refused to pay for her education. Bridget found that she was interested in anthropology.

2. You're separated from everyone that knows you and are forced to carve out your own identity

Carmen is separated from her three best friends since they were in diapers and finds that she doesn't know how to make new friends as the ones she already had were built in since birth.

3. If you choose to you can become better at your talents

Lena's art skills got better and better. Bridget, the social butterfly, made a ton of friends and was a soccer star at Brown. Tibby, although she procrastinated, was given the chance to work on her own screenplay at NYU and was able to work on student films.

4. You lose who you are sometimes

Carmen overeats and becomes insecure with her body, covering it up with baggy clothing. She even breaks up with her boyfriend from the previous summer because she feels like she doesn't love herself enough to bring something substantial to the relationship.

5. You have room to explore all of your interests

Bridget was able to go on an archeological dig to Turkey and really took to it.

6. You'll learn not to take the people who have always loved you for granted

Tibby breaks up with her boyfriend Brian after a pregnancy scare. When he starts to date Lena's little sister Effie, however, Tibby regrets taking for granted that Brian would always love her and wait around for her.

7. When you go back home it feels, and sometimes is, different

Carmen goes home during break to find a new stepfather and little brother, and a bigger house than she had growing up for a yard for the brother to play in, which she never had.

8. You can be who you never thought you could be in high school

It never even occurred to Carmen in high school that she would be a good actress. She finds that she's naturally good at it.

Lena finds that she's attracted to a hot guy in her art class named Leo. They get to know each other as they practice drawing together outside of class.

10. There are fake friends

Julia acted as if she had Carmen's best interests at heart but fed off her insecurities . Julia always had to be the star of their friendship and couldn't stand anyone else getting the spotlight.

Carmen chose to hang out with the members of her cast that were happy that she got the lead, rather than Julia, who sulked about it and tried to sabotage her.

12. You only keep your true friends from high school

Lena, Bridget, Carmen, and Tibby weren't able to see each other as much as they would have liked to, but they kept in touch through the pants.