"No response. He screamed once more, 'Leila!' The last syllable caught in his throat, but still she did not stir." 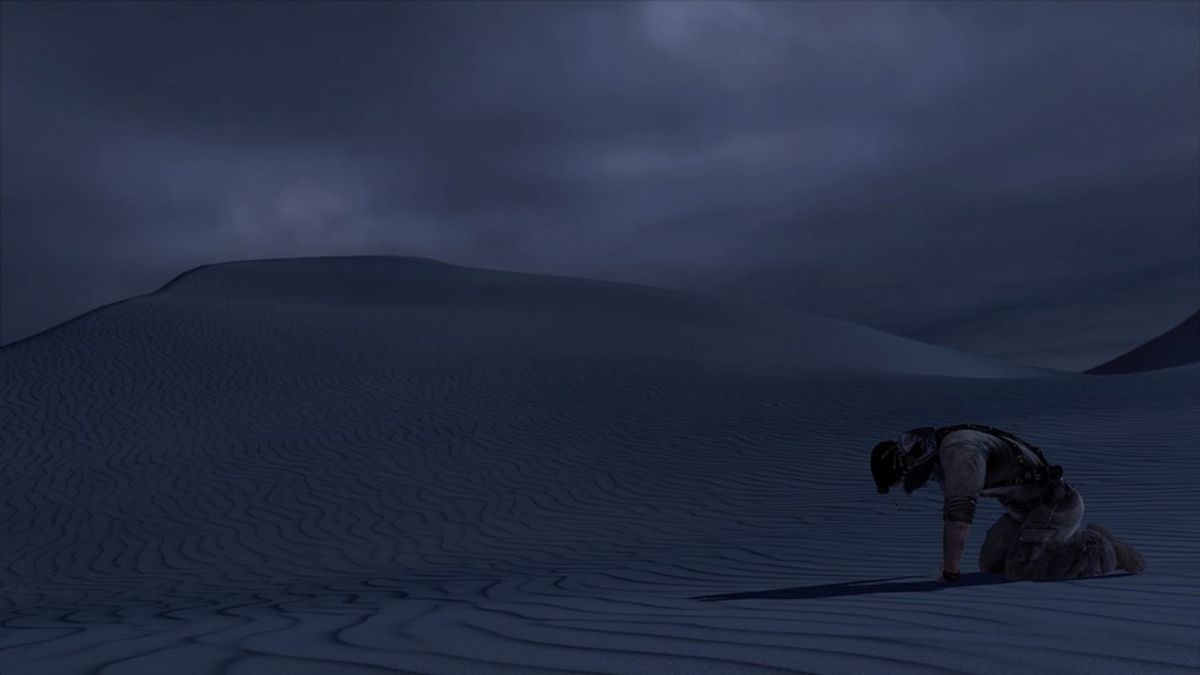 Need to catch up? Click to read Scene 3 from Shroud of Darkness, "Officer Sully".

Lieutenant Powers couldn’t feel his legs. He desperately tried contracting each muscle from his quads to his toes, but nothing budged.

Suddenly his heart rate spiked, and he immediately felt the adrenaline accelerate through his veins. From the corner of his eye, he had spotted bright orange and yellow flames. Shoot.

Blinking rapidly to clarify his vision, he realized that his parachute, his saving grace earlier, was now ablaze and encircling him. He stretched his left hand out to free himself from the chute and immediately pulled back.

“Ahhhh!” He clutched his left hand with his right, holding it close to his chest. The fire from the chopper had severely burned what was already most likely a broken hand. He writhed in pain as he attempted to flex his fingers mere millimeters. “Arrghh!” he screamed. But the flames were still coming. He could feel the intense heat licking his heels through his combat boots.

Wait...he could feel the flames. He slowly attempted to wiggle his toes, this time with success! He incrementally drew his legs up to his chest, distancing his feet from the fire just beyond.

Holding his left elbow and forearm close to his torso, he reached out with his right hand, catching the various chute cords and ducking his upper body through them. Pain shot up and down his left arm as he wriggled his way through the last of the cords, but at last, he was slowly able to rise and shrug off his chute pack. He stumbled a few feet away, far enough from a few chunks of fiery remains to be momentarily safe, but close enough to use it as a makeshift searchlight.

He scanned the rest of his surroundings. Red. Black. Orange. Mountains that NORAD would have been proud of. No stars. Hell, he thought. The wind was still strong, but with each passing minute, the gusts seemed to lose a shade of intensity. The tornado was weakening.

Powers squinted. The desert was barren, except for the charred, bent, and sharp shapes stretching up from the dust. These mapped the pieces of chopper that had showered down with him and Krignon. He lifted his chin, looking out further. He saw nothing resembling the rotor blades. He prayed that they hadn't flown off into the cyclone and hit their unsuspecting John Doe.

Then he saw her. Probably a hundred yards out. Close enough, but in his physical state, the expanse truly felt more like a mile. Still, he hobbled forward, feeling like he was a child again, learning to walk. All the while, his eyes stayed steady on the motionless figure of Lieutenant Krignon.

Reaching her, he sunk to his knees. She was on her back, chute strewn behind her head, legs tangled beneath her. "Leila," Powers said softly. He shook his head. Now was not the time for gentleness. He knew she must have suffered a concussion when the tornado had shaken their helicopter. At least, he hoped it was just a concussion.

She did not stir. He grasped her shoulder with his good hand and shook it. No response. He screamed once more, "Leila!" The last syllable caught in his throat.

He struggled up to his feet, frantically searching his flight suit for his satellite phone. He found it, and bracing it against his thigh, thumbed out the emergency number. The screen lit up momentarily then darkened. His breath shook. He tried again, jamming his frustration against every button. Nothing. He threw the phone at the ground. The tears came without warning, and he collapsed next to Krignon.

Hopeless though he felt, he knew he needed to get to the chopper. It was his and Krignon's last chance.

Powers rose, sweeping up the chute fabric and slowly stretching it under Krignon's body. Leaving her chute pack on, and gathering the strings so that they encircled her, Powers took the remaining slack from the cords and slung them over his right shoulder. Careful so as to not bump her head on anything else, Powers gently dragged his partner behind him as he approached the main cabin of the scorched and shredded chopper.

Stopping a few feet before the chopper doors, he nestled Krignon's head against her chute pack, tilting her head to the side in case she revived and needed to throw up.

He pulled his torn uniform's sleeves over his hands and grasped the smoking cabin door with his good arm. He shoved it back. "Creeeeeeaaaak!" The door squealed back barely a foot, but it was enough. Powers wedged his shoulder through the door and climbed into the cabin, squeezing past the backboards and other emergency first aid supplies. He grabbed a first aid kit and strapped it to his flight suit belt, then shuffled forward into the cockpit.

Their pilot and co-pilot seats were shredded. The controls were blackened, and the front window was shattered. He ignored the hollow remains of his "office" and knelt, feeling underneath his co-pilot's seat. After a few moments, his fingers clasped around the cylinders and he pulled them up. Three rescue flares. He sighed a breath of relief. For the first time in the past few hours, he felt the slightest lift of hope in his heart.

He tucked the flares inside his flight suit pocket and maneuvered his body around the burnt seats towards the door he had broken off when they had jumped from the crashing chopper earlier. Just before ditching the chopper for what he hoped would be the last time, he paused once more.

Bracing his back against the doorframe and still clutching his broken arm to his chest, Powers looked up to the cockpit ceiling. A white paper corner was visible through a seam. He licked his fingers and reached up, grabbing the corner and tenderly pulling. Though it had not completely escaped the fire within the cockpit earlier, the ceiling had masked the photo from the majority of the fire damage. Powers wiped his thumb across it, smoothing away dust and soot.

In the photo, the two girls smiled up at him. The older sister and almost-teenager who had somehow not yet succumbed to the moody stages of her peers, and the little thumb-sucking girl with toothy gaps and innocent green eyes.