Seven Reasons to Watch Avatar: The Last Airbender
Odyssey
CurrentlySwoonLifestyleHealth & WellnessStudent LifeContent InspirationEntertainmentPolitics and ActivismSportsAdulting
About usAdvertiseTermsPrivacyDMCAContact us
® 2023 ODYSSEY
Welcome back
Sign in to comment to your favorite stories, participate in your community and interact with your friends
or
LOG IN WITH FACEBOOK
No account? Create one
Start writing a post
Entertainment

The show (not that god-awful movie) tackles some pretty complex issues for a "children's show." 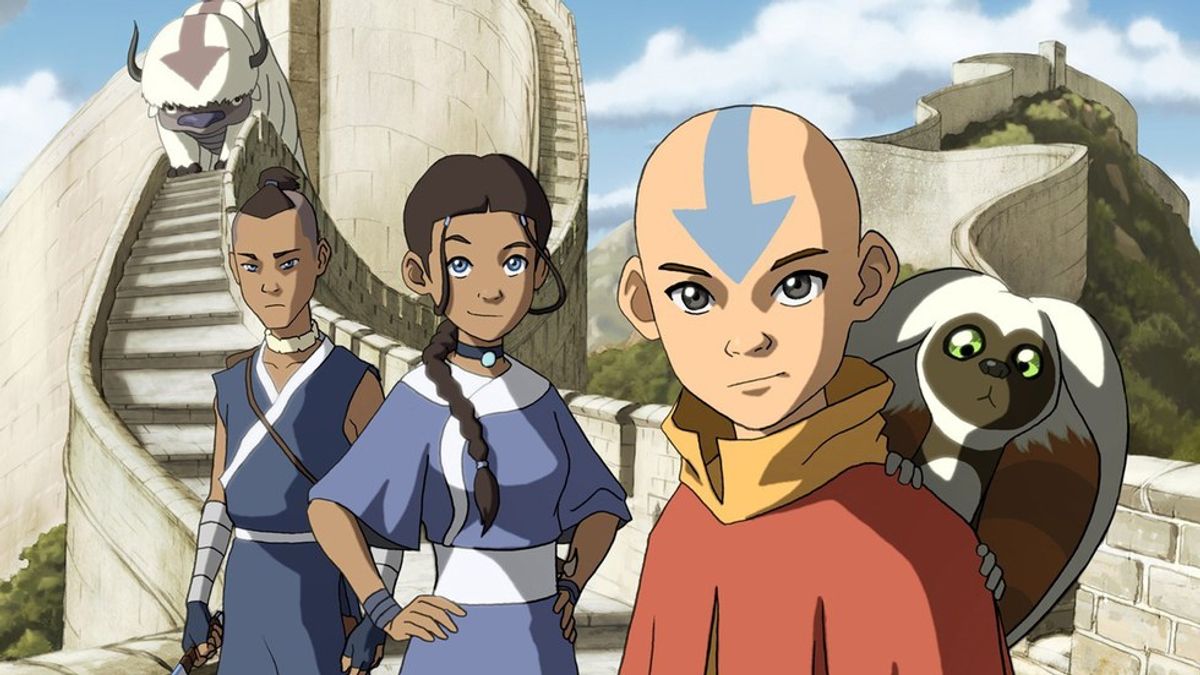 Who says a children’s show can’t have depth? I’ve been watching a lot of Avatar: The Last Airbender lately, and this Emmy-winning show has a lot of material that isn’t just canned humor and useless filler. The show tackles issues that face our society, all in an easy-to-understand framework and has an amazing storyline, with complex characters and a well-thought out world. So, if you’re looking for a new show to start watching, here’s a few reasons you should start watching Avatar: The Last Airbender.

1. Avatar is set in a fantasy world in which some people are able to manipulate one of the four elements to their will: either fire, air, water or earth. Only one person – The Avatar – can manipulate all four elements and maintain harmony in the world. The Last Airbender sees the Avatar reincarnated as a 12 year-old Airbending boy, Aang, who is sweet natured, cheerful and incredibly unprepared to take on any major foes, which is unfortunate because basically he has a few months to stop the apocalypse. See, the Fire nation have gone a bit… totalitarian, shall we say, and have invaded the rest of the world – oh, and already wiped out all of the rest of the Airbenders. So yeah, the cartoon starts off with genocide, but then so does Star Wars, so I’m pretty sure that’s all fine. By the end of the series there’s a large group of characters that you care deeply about and couldn’t bear anything bad to happen to.

2. The first season sees banished Fire Prince Zuko and his uncle as main antagonists, chasing Aang from pole to pole, but from early episodes you get the feeling that Zuko’s no out-and-out bad guy. Even early episodes mark the start of one the best, most unhurried and logically progressing redemptive arcs I’ve seen in a long time. Zuko’s story is practically a hero’s journey of its own. Later, another great antagonist is introduced – Zuko’s slightly unhinged and power-hungry sister Azula. Azula is properly powerful and sinister, and it’s refreshing to see a teenaged female villain who is driven by sheer lust for power, rather than a broken heart or a need to impress a boy. Azula is doing this for Azula. Which leads to the next point…

3. The Last Airbender isn’t afraid to be openly feminist. The show starts with Katara, a young waterbender, berating her brother, Sokka, for his sexism. Sokka quickly learns, from his sister and from the women he meets on his travels, that girls are his equals, his teammates and his friends, and apologizes for his previous behavior. The show is full of great female friendships, on both the heroic and villainous sides. Girly, maternal Katara and unapologetically tomboy-ish Toph form a friendship like no other in the series, and Azula travels with her own girl gang, each character being as complex as any other. We see disabled girls, girls of color, poor girls, rich girls, girls in love, girls happy to be single, girls being generally badass, girls having fun, girls having adventures and finding romance on their own terms – basically, girls being given equal representation, importance and agency as boys. And the boys on the show are all so cool with it. They all love having brilliant female friends and the view that they bring to the situations they find themselves in.

4. I have never seen a series with as much depth and complexity to its characters as The Last Airbender. The whole point of the series is that it’s not really about “good vs evil”. The “good guys” have some serious flaws – even the main hero, Aang, can be a jerk at times – and the “bad guys” almost always have an element of good in them; they’ve just lost their way, or been consumed by a lust for power and glory and committed genocide. While the morality of the characters is complex and not set in black and white as “good” or “bad”, the storyline and the characters’ goals are always very clearly set out. The characters are as complex as people in real life and that brings a new element to the series that enhances its quality and makes it so much more stunning.

5. Having characters that can manipulate elements leads to some pretty awesome battles. The show’s creators based each bending technique on an existing Chinese martial art – the different fighting moves are animated beautifully in exciting action sequences. The detail and thought that were put into creating the different styles of bending brings some exceptional detail to the show.

6. Every show has some filler episodes. You know, ones that are mostly there for humor, they don't contribute to or drive the plot very much, if at all. But even the filler episodes in The Last Airbender are so great. In fact, they’re some of my favorites. A running gag about an unfortunate cabbage salesman becomes funnier and funnier the longer it goes on, and it runs through the entire series.

7. The sequel series, The Legend of Korra, is set nearly 70 years after the end of The Last Airbender and tells the story of a new Avatar – a teenage girl. I’ve watched over half of that series, and it continues with many of the qualities that make The Last Airbender amazing: the complexity, the characters, and the detail. The way they’ve moved the world on since the end of the first series is really interesting, and seeing the descendants of the original characters makes you feel pretty nostalgic.

QueenRadhi
The State University of New York at Stony Brook
3267