Meet Ruby Karp, The 17-Year-Old Who Wrote A Book About Rape

Meet Ruby Karp, The 17-Year-Old Who Wrote A Book About Rape

“Believing in equality is not aggressive.” - One of the many awesome quotes from Ruby Karp. 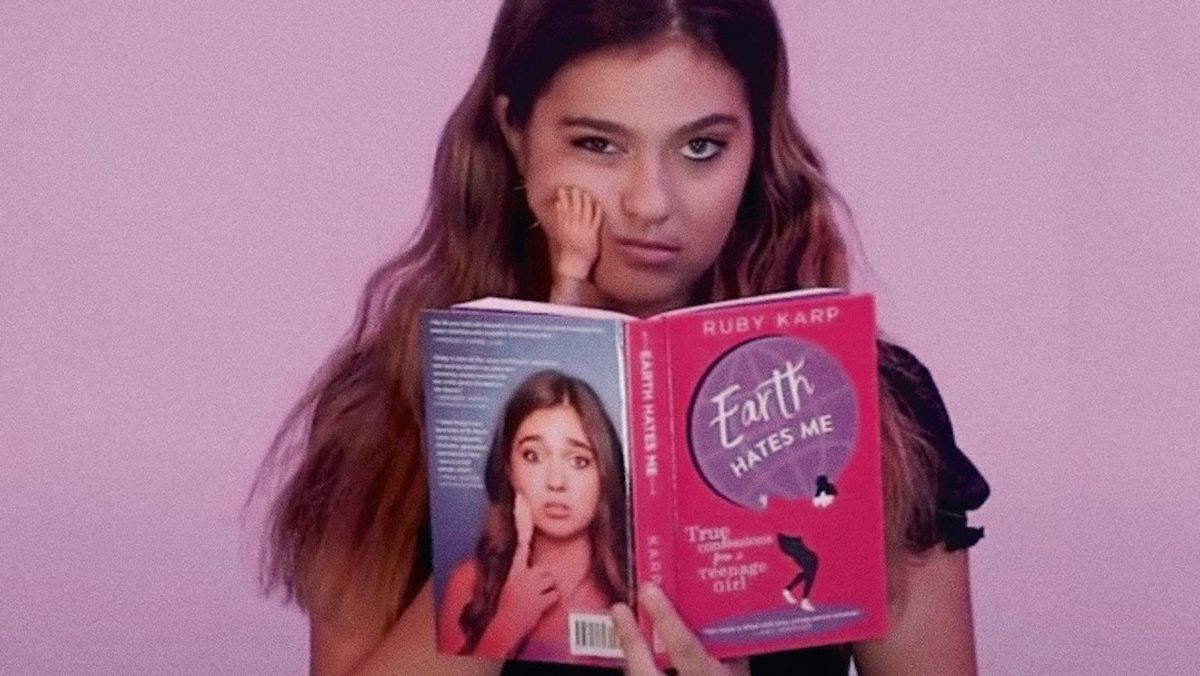 Ruby Karp was sitting in class one day learning about consent. She raised her hand and asked her teacher, "...why don't you teach us how not to rape?". She was then kicked out of class for "causing too much disruption". That gave Ruby the inspiration to write a book on her experience growing up as a young woman in a society that still continues to target women and throw both shade and blame at almost every little thing they do.

Before becoming a professional author of "Earth Hates Me: True Confessions from a Teenage Girl " at the age of Ruby has had quite a lot of accomplishments. At the age of three, she went on UCB as a guest on "Talk Show with Paul Scheer and Jake Fogelnest." She appeared on the first episode of "Shutterbugs" with Aziz Ansari, met Amy Poehler and spoke about being a feminist — at the age of seven! — and she's performed on other UCB shows as well. She has written for various blogs and online platforms ranging from Hello Giggles, Mashable, Refinery29, and SparkNotes. She's been on a Ted Talk, became an ambassador for Dove on positive body image and spoke on the topic at the UN as well.


"Earth Hates Me" is about teenagers navigating social media and embracing feminism. It's basically like a memoir and self-help book for young women, which we desperately need more of because growing up is hard enough but dealing with social pressures and judgment, it's pretty much hell. Ruby wants to prove to adults that the millennials are interested in more than just their smartphones. In an interview with NowThisHer, Ruby said, "Adults are so quick to call us lazy and boring and just obsessed with our phones. But really I think we're the most innovative generation in years. We're all so active and ambitious and so aware of what's happening in the world because we're surrounded by so much culture and we have so much access to all of it that I think we're living in one of the smartest generations in years." You said it, girl!


Amy Poehler loves the book too and says, "This book is filled with juicy young person wisdom." "Earth Hates Me" is perfect for young teenagers growing up in the modern age and also a great read for those who used to be a young teen. They will have a great time reminiscing about being a teen and just getting through high school while juggling schoolwork, friendships, relationships, breakups, makeups, etc.

Here are the topics that discussed in the "Earth Hates Me":

So there are plenty of things one could relate to in this book, but it's not just for teens or young adults, old adults can enjoy this too. Ruby touches on this often overlooked point that our parents were once young teens too and it may have been in a different time, but dealing with heartbreaks, societal pressures, schoolwork, and rollercoaster relationships are relevant in any time period. Ruby brilliantly states, “We forget that our parents were once young and had lives where they also felt out of place at a party they didn’t know enough people at. Our parents aren’t minions from another planet, and as hard as it is to remember that, it’s important we try to, so we don’t spend every moment hating them.”

I honestly can't wait to read this book and luckily for us, we don't have to! It's already been released on October 3rd and you can buy it from Amazon or Barnes and Nobel.