Everything Wrong with the Marvel Universe 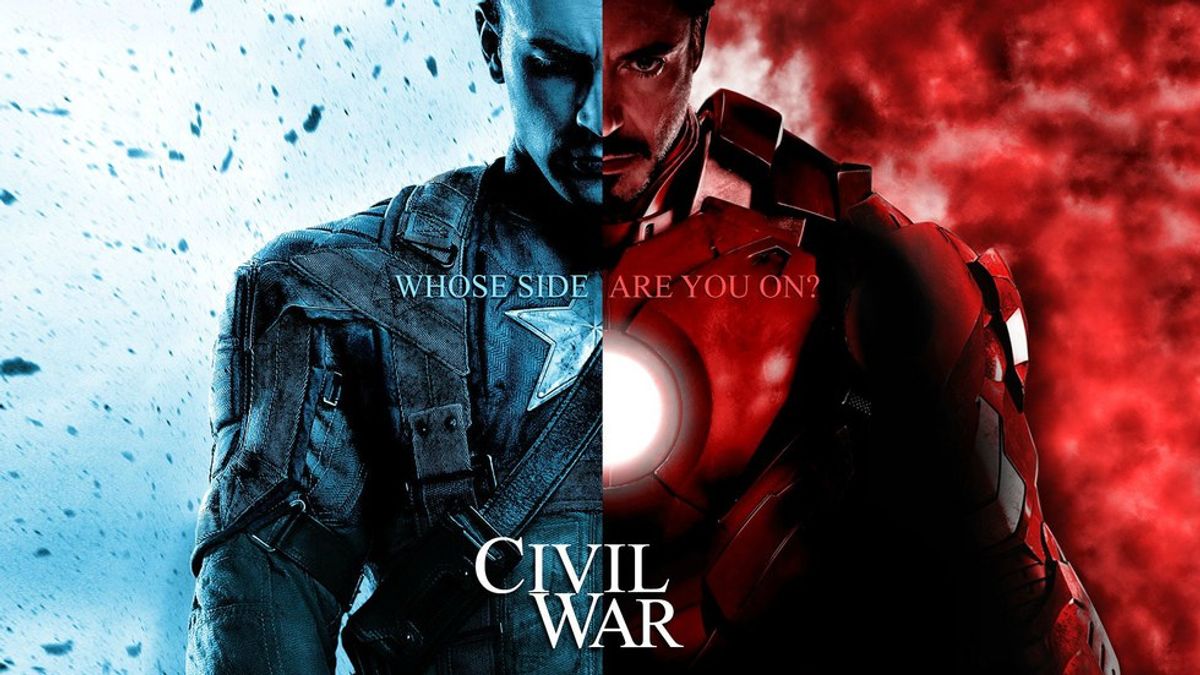 The 2015 movie season is the most highly anticipated movie season since, and Captain America: Civil War may be the most highly anticipated movie of the summer. Both dedicated Marvel fans and casual movie goers are flocking to the cinema to see the critically appraised super power slug fest. Some have even scene it twice already (*cough cough*) totally not me. The movie is a critical success, and comic book expert, Kevin Smith, has gone so far as to call it the greatest comic book movie of all time, comparing it to the Dark Knight. The movie was definitely good, but to compare it to the Dark Knight is like comparing delicious chocolate chip cookies to a fiber one bar, its an okay snack but we all know which one is better. Therefore, I now present to you my review of Captain America: Civil War. There will be spoilers.

As proven in the previous installment, the Russo brothers know how to direct action scenes. The action scenes in Civil War are excellent, they combine a plethora of gritty hand to hand combat that we have come to expect in a Captain America movie; however, there is also a ton of quality super-powered fights executed in a way that we haven't scene yet in the MCU. The action pieces are exciting and fast paced, as well as being very high-stakes by pitting our favorite characters against each other.

I was extremely skeptical about Black Panther, going into the film. He seemed like a second or third rate character, but I was absolutely proven wrong. Black Panther's story arc perfectly exemplifies the broader them of the movie. With the death of his father, he is pulled between the values of loyalty and morality, where he must decide whether to avenge his father's murder or allow for redemption. He ultimately decides to spare Zemo, and allow for himself to be free free of vengeance consuming his life. Something the other characters cannot do.

If you couldn't tell from the promotional material, this story pits Captain America against Iron Man, who have a dispute over whether or not the government should regulate "enhanced" people's activities, because of the fall out from the previous movies. The reasoning for both sides is rock solid. The movie delves deep into the damaged character that is Tony Stark, and Robert Downey Jr. does a masterful job of portraying the emotions of loosing parents and being the cause of so many deaths. Chris Evans has always been the best casting for Steve Rodgers, and, once again, defines the character as being a rigid, moral and loyal friend. Marvel has traditionally been criticized for their movie villains, but this isn't the case. Daniel Bruhl is astounding as Baron Zemo, and something tells me he will be back.

Tom Holland is absolutely amazing as Spider-Man, better than both Tobey Maguire and Andrew Garfield. This take on the character is the most accurate to the source material we have seen yet, and it is absolutely amazing. Holland is completely believable as a teenage kid from Queens with super powers. He's fun to watch and absolutely hilarious. The brief screen time made me excited for the upcoming Spiderman: Homecoming movie.

3. Its all over the place

Team movies are the way superhero movies are going, but that is a slippery slope. If not done correctly these movies can be way overblown and choppy. This movie has over 12 superheroes and a villain, meaning that 13 characters are fighting for limited screen time. Add that to the over abundance of dialog among characters, and the jumps from city to city, this movie can easily become confusing. The audience barely has time to blink, let alone take a bathroom break, which is a big deal during a movie with a 2 hr 27 min run time.

2. It relies on knowledge of almost all of the past marvel movies

With the insane number of characters, there is not time to give a background on everyone. Also, with a jam-packed plot, there is no time to explain the background between Tony Stark and Steve Rodgers. Casual movie fans and new comers would have a very difficult time following the logic behind the two ideologies. They would not know some of the background heroes, like Hawkeye, Ant-man and especially War Machine. War Machine becoming a big problem since his injury is the emotional turning point of the movie. The script brought in characters from the Incredible Hulk, that I didn't even remember. A shared universe will always have this problem, but Civil War relies on the background knowledge more than any other movie

1. There are still no consequences

This is my number one problem with everything in the MCU. We have yet to see a movie that has had serious implications at the end. The two most prominent Avengers just battled for almost two and a half hours, and at the end they send each other a letter to make it all okay. The most shocking scene in the entire movie, when War Machine gets paralyzed, is gut wrenching, but ultimately gets fixed with some sophisticated Stark tech that helps him move his legs. The Marvel executives are so scared to end some things on a bad note that it begins to ruin the credibility and emotional pull to the bad things that happen during the movie. It isn't just this movie either. Coulson dies in the first movie, but don't worry he'll get a TV series. Loki dies in Thor: Dark World, but don't worry its just a trick to take over the throne. Even Nick Furry gets to come back to life after being absolutely riddled with bullets. Its unrealistic and disappointing to know that the entire emotional basis of a movie is manufactured to tie up nice so that we can all go home with a good feeling. Give us some depth or we aren't gonna buy into your plot.