A Nostalgic Walk Through The Classic Disney Film 'The Lion King'

A Nostalgic Walk Through The Classic Disney Film 'The Lion King' 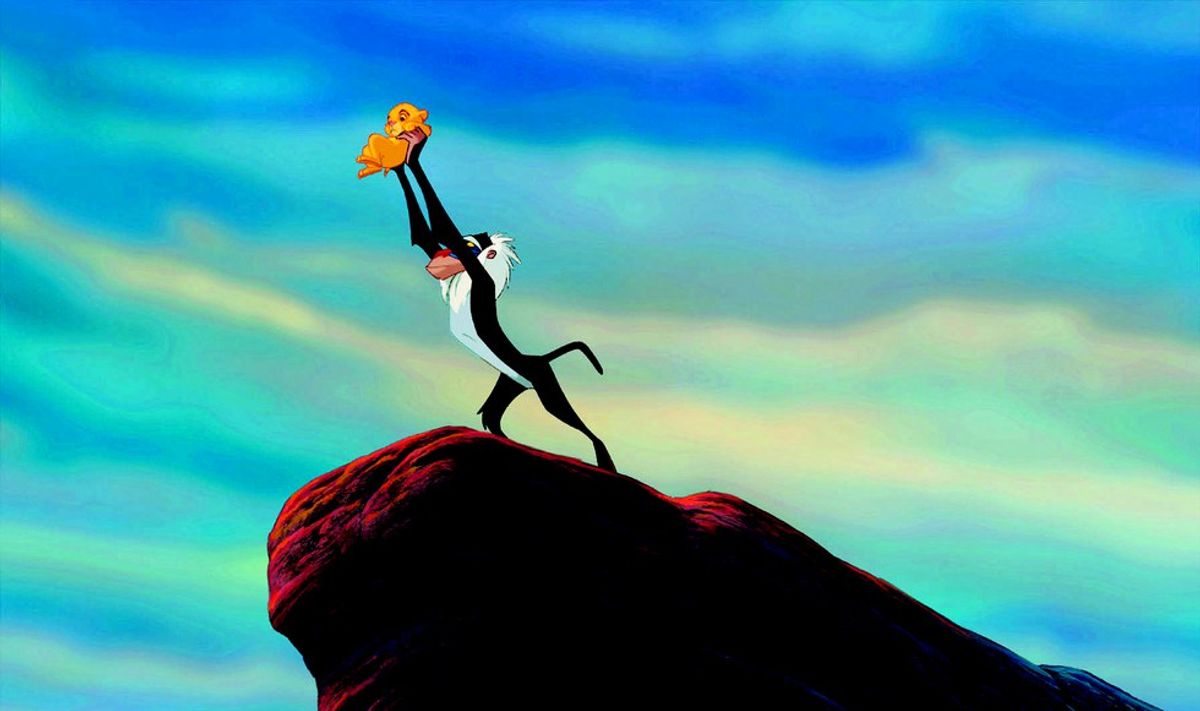 The Lion King was a staple cassette tape on the shelves of every American living room in the '90s. Now, at the refreshing age of 21 (the estimated age of every child that loved Timon and Pumbaa), Disney's 1994 classic is still exactly that.

Giving it a thorough 847th watch, I was able to sit back and soak in exactly why this movie succeeded for toddlers, and why it still succeeds for us same toddlers as young adults.

Let me preface my review with a simple spoiler alert. If you haven't watched it, do so as soon as you find 89 minutes to yourself and come right back. It should be lying around in your parents' house somewhere. Now that we've eliminated essentially no one, lets take this Nostalgia-Coaster through the Lion King.

We all remember so vividly trying to figure out the first few words of "Circle of Life". What in the world were they singing? “Ah Sivenya ege itchy baba,” was my own personal interpretation. But after wondering for two decades, confidently defending my take on it, I finally decided to just Google it.

It just so happens I was dead wrong… and so were you (You didn’t know it either!).

The song moved along, and we met all the gazelles, elephants, and giraffes of Mufasa’s kingdom. We see Rafiki, my personal favorite, climbing Pride Rock to baptize and hoist the king’s new baby son, Simba, before the pride land (I might have cried. It had been a while).

�The Lion King has begun!

As much as I would love to discuss every single frame of the movie with you, I cannot. So without further adieu, I would like to move on to the source of my nightmares as a child, the death of Mufasa. First of all, how dare they? I watched this movie twice a day, and they killed him 35 minutes and 43 seconds in-- exactly. I was an optimistic kid, so I re-wound it every time. I figured just once he would muscle his way back up and toss Scar into the stampede. I was five; I didn’t completely understand how it worked then. I understand now he’s not coming back. At least I found comfort in the scenes where Simba sees Mufasa’s ghost up in the clouds.

After that horrific event took place, Simba’s life took a turn in the other direction when he meets his best pals for the remainder of the movie, Timon and Pumbaa.

These two animals, in my own personal opinion, complete the movie. Without the comedic tandem of a spunky meerkat and an overweight warthog, this story would be too dry, and not quite funny enough to keep the attention of children. I admit, I didn’t rewind the movie every time. I certainly wiped away my tears however, head held high, knowing that Timon and Pumbaa were coming.

Now for the adult aspect of Timon and Pumbaa: These characters were placed in the movie to attract our parents just as much as they were to attract us. For example, as I’m sure you all remember in the scene where Simba, Timon, and Pumbaa are laying out in the grass, looking at the sky, Pumbaa asks Timon what those “sparkly dots are up there.” Timon then replies by saying that he doesn’t wonder, he knows. “They’re fireflies that got stuck up in that big bluish black thing.” Pumbaa then replies with, “Oh, gee. I’ve always thought they were balls of gas burning billions of miles away.” Now unless you were the child of an astronaut, you did not catch that joke. I certainly did not.

The last scene of the movie, of course, is when Simba takes the crown that was rightfully his and revives the kingdom Scar brought down. We all remember Timon dancing in the hula girl skirt and Pumbaa sitting there like a roasted pig, drawing the hyenas away from Simba while he threatens Scar to tell the others who truly killed Mufasa. And just as we all wished Simba wed Nala, and had his only little prince to continue the dynasty.

The Lion King was one of those movies that just hit home every time we watched it. It was a great story, laughs and generated great memories. Although there are a few classics that give it a run for its money, it would be hard to say The Lion King isn’t my favorite Disney movie of all time.