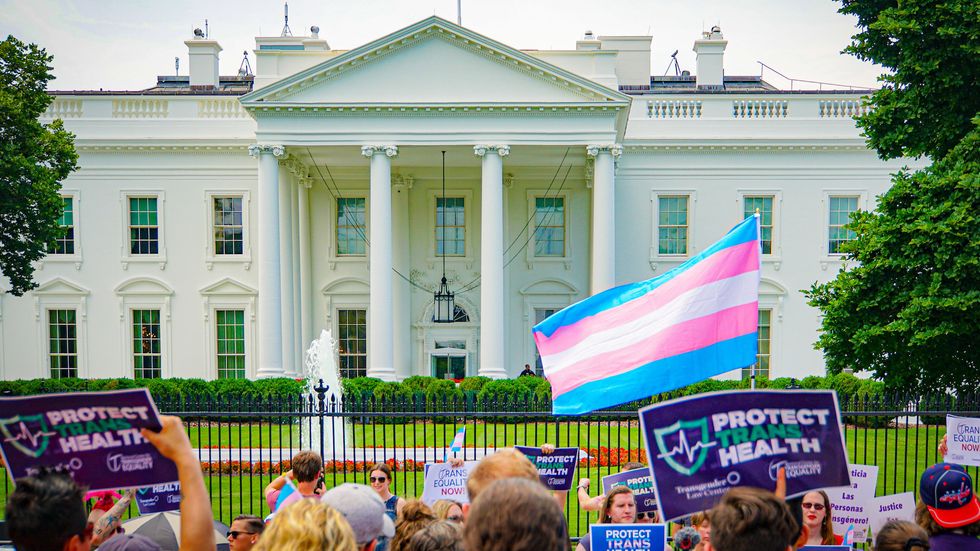 The Trump administration announced on Friday they would be removing LGBTQ protections in health care and health insurance. These protections were previously enacted by the Obama administration. They will change the definition of "sex discrimination," limiting it only to those facing discrimination for being male or female. It will no longer include discrimination based on gender identity or sexual orientation.

Some say that since transgender people are still able to legally change their sex, they're still protected. Unfortunately, it isn't that simple. There are plenty of transgender people who are at the start of their transition. These individuals haven't made that move yet. Those individuals need protection for their gender identity. Not to mention the fact that people could be discriminated against based on their sexual orientation.

Section 1557 of the Affordable Care Act states that people are protected from discrimination based on "race, color, national origin, sex, age or disability in certain health programs and activities." This is what the Trump administration is focused on changing. I, personally, feel that sexual orientation and gender identity should be added to the list. But I'm not going to hold my breath.

The reason for these decisions come down to a perceived violation of religious freedom. There are people who feel providing service to an LGBTQ individual will be going against their religious beliefs. Since they interpret their religion as speaking against it, these people feel they can't serve anyone who is LGBTQ. We've seen this before with bakers who refused to bake wedding cakes for same-sex couples.

The problem with this mindset is it's actually incorrect. I know it's not my place to tell people what their religion states. However, it's important to understand that no holy book speaks about providing a service to an LGBTQ person. You're not going to read about gay wedding cakes in the Bible. You're not going to read about health insurance for transgender people in the Torah.

When someone interprets their religion as being against same-sex marriage, it applies to that person alone. It is impossible for everyone to subscribe to the same religious beliefs. After all, there are so many religions and diverse ways of thinking. That's a reality we can't change, even though some, like Jehovah's Witnesses, try to.

Therefore, one can't expect anyone but the individual in question to follow the same-sex marriage rule. This is why it was so important for us to have marriage equality legalized across the country. There is supposed to be a separation of church and state after all. We weren't taking anyone's religious freedom away in the process. They are still free to not marry someone of the same sex. We just wanted to be free to do so ourselves.

There are many arguments in support of refusing service to LGBTQ people. One of them states that LGBTQ people could just find another baker or doctor who doesn't have an issue. The problem is that it isn't always that easy. Some people live in a very small town with limitations. If a child is trans, they might only have one option. If they can't get the health care they need, their dysphoria will increase. This could lead to suicide.

When someone refuses to bake a wedding cake for a gay couple or provide a trans person with health care, they aren't simply following their religion. They are discriminating against a group of people. Their religion never said anything about providing such a service. It wasn't a component of their religion until very recently, once we started gaining equal rights.

Trump has been no stranger to hissy fits in his four years as president. In a way, this move is pretty much in line with his character. I'm not going to lie, at the start of his presidency, I wasn't entirely convinced Trump was an enemy of LGBTQ people. However, my mind has definitely changed. From not allowing trans people in the military to this, he's proved himself to be a horrible leader for the LGBTQ community.

I don't think it's an accident that a decision like this was announced during Pride month. Not only that, but it was announced on the anniversary of the Pulse nightclub shooting. This isn't what our community needs right now. Trans women of color are being murdered at an alarmingly high rate. We're living through a pandemic and police brutality. What we need is a leader to be on our side, not strip us of our rights.

I find it rather interesting that race isn't being removed from the list of those protected from discrimination. Don't get me wrong, I think it should definitely remain in place. However, it's important for people to remember that white people used to cite religion as a reason for slavery. They also used to cite religion as a reason to ban interracial marriage. If religion has evolved on matters of race, it should evolve on matters of gender and sexuality.

Freedom means for everyone to be free. If your definition of freedom includes restricting others of something, it's not real freedom. Despite what some might say, it's not always easy for LGBTQ people to find another bakery or another doctor. Not to mention that we shouldn't have to. We need to defend real freedom and have a leader who will do the same.