I Am A Proud Donald Trump Supporter — Get Over It
Odyssey
CurrentlySwoonLifestyleHealth & WellnessStudent LifeContent InspirationEntertainmentPolitics and ActivismSportsAdulting
About usAdvertiseTermsPrivacyDMCAContact us
® 2023 ODYSSEY
Welcome back
Sign in to comment to your favorite stories, participate in your community and interact with your friends
or
LOG IN WITH FACEBOOK
No account? Create one
Start writing a post
popular

I Am A Proud Donald Trump Supporter — Get Over It 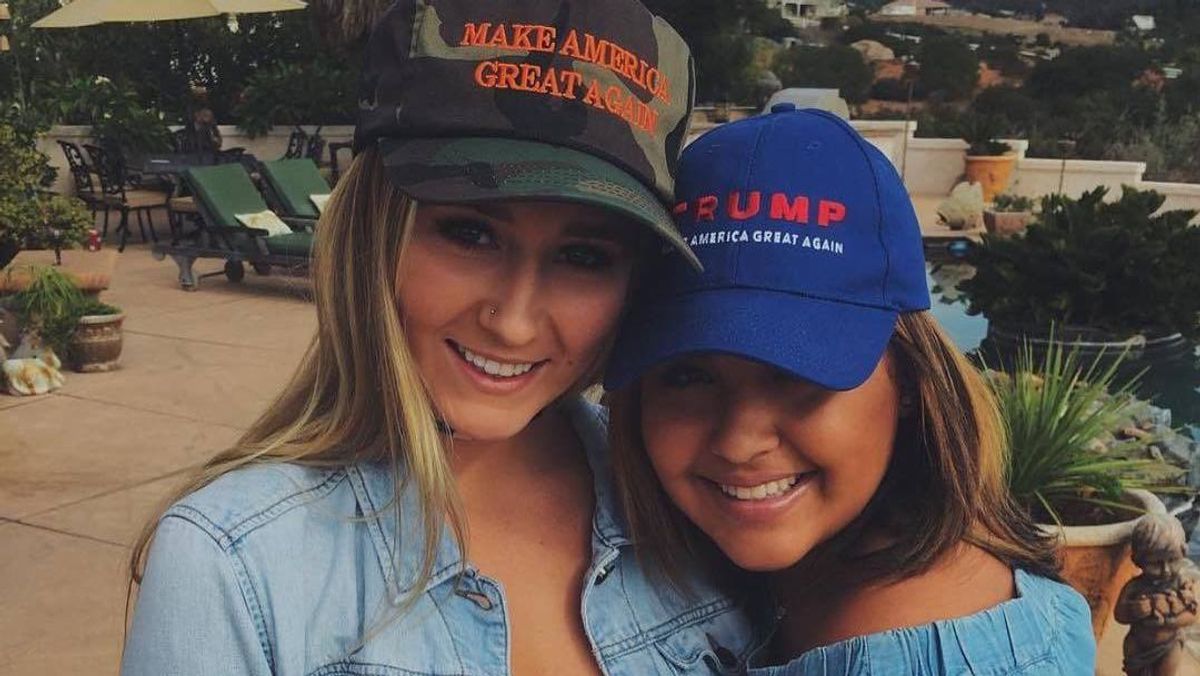 It is no surprise that politics are a very touchy subject. Some people even refuse to talk about it, and I see why (this is especially true during election season). It's almost as if America is at war with itself because of who supports who and who is voting for who. Well, I am a 23-year-old female college graduate and I am about as pro-Trump as you can get.

Now, before you start calling me a racist, sexist bigot — let me inform you of one thing. Opinions, especially political ones, are like a**holes: everybody's got one. Just because my views don't align directly with yours doesn't make me any less educated than you are. If anything, your lack of respect for my beliefs and feelings puts you in the wrong here. If you're one of those crybabies that "feels physical pain" due to somebody writing pro-Trump messages in chalk on your college campus, my heart aches for you. It's time to grow up.

Please realize that in the real world things are going to offend you. Most of the time, crying about it will get you nowhere.

People all over the country are scared to openly admit that they support Trump — even celebrities. People are getting their cars keyed for having Trump bumper stickers, harassed on the internet for reposting pro-Trump articles and stickers and even having their houses and property defaced for Donald Trump lawn signs.

I find this absolutely disgusting.

We live in America, the greatest country in the world. We pride ourselves on free speech. Our Founding Fathers fought for that right, and our soldiers overseas fight and lose their lives every day for the same reason. How dare you deface somebody's personal property for their political beliefs? This goes for anybody, regardless of who you support politically.

I support Donald Trump, I am not ashamed to say it.

He is not a racist, and neither am I. Trump speaks the absolute, unfiltered, non-politically correct truth about what's wrong with America today — and how he plans to fix it. Donald Trump does not want to deport all immigrants. He actually welcomes people from other countries to America, he just wants them to do it correctly.

The media will brainwash you and tell you different, and liberal America eats it up. Donald Trump supports our active military and our veterans. Trump said, “It's a national embarrassment that an illegal immigrant can walk across the border and receive free health care and one of our veterans that has served our country is put on a waiting list and gets no care."

Trump also wants to lower the unemployment rate by taking jobs back from foreign countries, such as China. Can you imagine how many U.S citizens would be put to work if this policy was implemented?

Donald Trump is for America.

Many liberals and Democrats will do their best to paint him as the most evil man to ever live, but that couldn't be further from the truth. People are made to feel shame if they openly agree with Trump and his policies. Not me, not today.

I understand that people will have differing thoughts on subjects and I respect that. You voted for Hillary? Good for you! Or Sanders? More power to ya! Kasich? That's cool! But don't you dare ever try to put me down or deface my property for how I feel, what I believe, and who I support to run this country. You have absolutely no right.