Power of 'The Alchemist'
Odyssey

Reading ‘The Alchemist’ Is An Essential Part Of Personal Growth

We all read it in high school but now it is time to pick it up again. 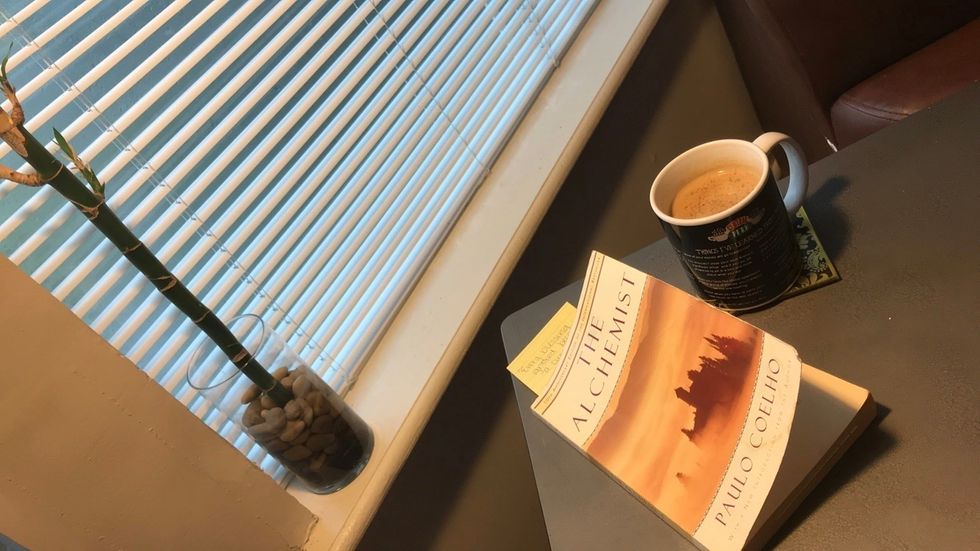 "The Alchemist" is a book by Paulo Coelho about what happens when a person realizes their destiny, or "Personal Legend." The story follows the journey of Santiago, an Andalusian shepherd boy who dreams of traveling. He meets a gypsy who interprets his recurring dream of children directing him to treasure hidden in the Great Pyramids in Egypt. Then he meets an all-knowing king who informs him that he successfully discovered his "Personal Legend," which is defined as " what you have always wanted to accomplish."

To me, it's always seemed like the idea of one following their heart is something that they are almost just expected to outgrow. So when someone doesn't, and they hold onto their youthfulness, it's seen as naive.

I've let my life be led by passion, music, beauty, and creativity because that's what inspires me. It never seemed like logic, calculations, or reason would ever be as important. Reading Paulo Coelho's words was the first instance in which I felt entirely confident in my focus. Even as someone who's always been sure of what I wanted out of life, "The Alchemist" still opened my mind in ways I never thought possible. I can't begin to imagine how much it would help someone with no idea of what's next.

I've doubted myself so much when I've known what I wanted to do since I was seven. When I realized that writing and storytelling was a possible career, and not just something I could enjoy doing, it seemed like the world opened up. But still, I've been made to feel crazy for trusting in something that came to me at such a young age. It's like we're supposed to second-guess ourselves. And without outside influences, I probably wouldn't have.

The very same people, like teachers and guidance counselors, who "prepared" us for our futures also make us doubt everything we know about ourselves. They would never tell us what to do outright, but they make suggestions based on our parents, what will make us the most money, and our test scores. Very seldom do people tell us to listen to our hearts as we get older. It's like they don't want our mistakes on their conscience so they suggest whatever is conventional.

"The Alchemist" addressed every fear I've ever had about my future. Things I thought were personal struggles, I discovered were universal. Just like the crystal merchant who Santiago met on his way to Egypt, I've sometimes been scared of going after what I want because it seems easier to let things be a dream. When you have what you've always wanted, you finally have something to lose.

Knowing the doubts people have makes taking the leap seem really scary because no one really knows what anyone is capable of. There's a lot more unknown than will ever be discovered. I guess that's why Paulo Coelho wrote, "people need not fear the unknown if they are capable of achieving what they need and want." Then he later goes on with, "fear evaporates when we understand that our life stories and the history of the world were written by the same hand."

Thinking about what would happen if I no longer had my heart to guide me where I needed to go is something else that scared me. I try not to think about it often because it's really the only thing I fully trust. But Santiago learned that, as long as he listens to his heart, it will speak to him. His heart reassures him of that in a conversation they have with one another. And I know my heart isn't going to start talking to me the way it happens in the book, but it was all the reassurance I needed.

I've never really been the type of person who needed much reassurance or permission when it came to pursuing my destiny, but I definitely won't reject a few words of encouragement.

After finishing the book, my mind wandered back to high school. Back when the biggest decisions of my life so far were being thrust upon me. I just wanted to be shown that every move I made didn't have to be logical. Teenagers need more tools than trigonometry and the periodic table in their back pockets to figure out the rest of their lives. Some of the things I was taught made me hate learning, and books made me hate reading when that was always my favorite thing to do. There was a time when books were my escape and I thought they had the answer to everything. Then I was told how to interpret them and it took my imagination away.

"The Alchemist" brought that love and inspiration back. It didn't make me feel like my mind was confined to one way of thinking because the story has so much depth. I wish I knew my mind had the opportunity to be this free a long time ago. And I wish that I would have read it, and books like it, that provide a reader with so much perspective, instead of being told what I was supposed to think. I knew what I wanted all along, and I didn't need any help in making decisions.

By reading "The Alchemist," I finally realized that allowing people to help you make your decisions comes at a price, and that's why Santiago had to give the king some of his sheep. One's intuition is all a person needs. "Intuition is really a sudden immersion of the soul into the universal current of life when histories of all people are connected, and we are able to know everything, because it's all written there."

For the first time in a long time, I have confidence in my hopes and in myself. Reading a book as beautiful as "The Alchemist" feels like a blessing. And I trust every word of it because, as it says, "every blessing ignored becomes a curse."

From Your Site Articles
Related Articles Around the Web
book
Report this Content
This article has not been reviewed by Odyssey HQ and solely reflects the ideas and opinions of the creator.