There is no difference besides the different activities. 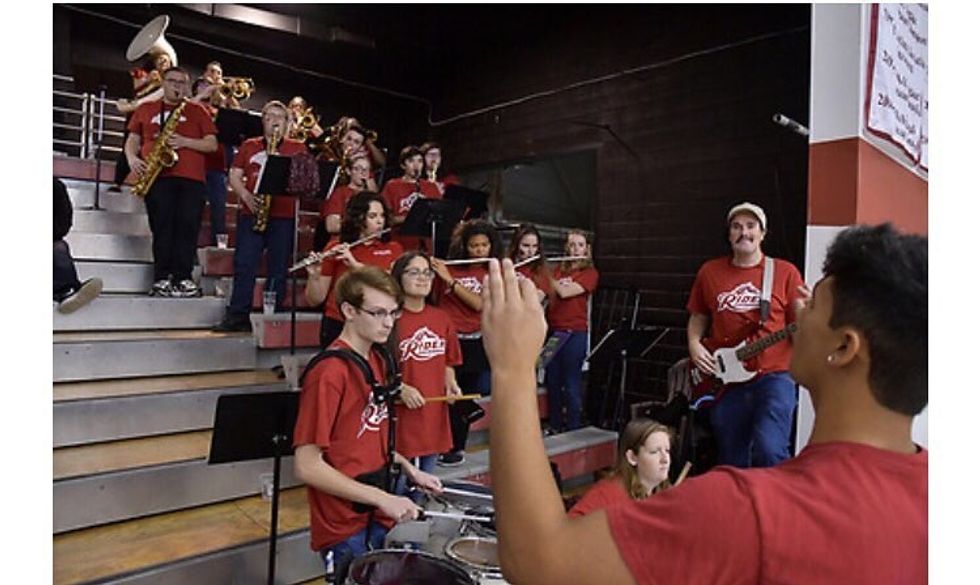 If you were a band geek/nerd in high school and were really into music, you were probably in a marching band. You enjoyed going to football games and playing whenever there was a break in the game. You also probably competed in some sort of band competition that got you a trophy or a score you are still proud of to this day. You made friends with a lot of people in your marching band, and hung out outside of your scheduled marching band practices. In other words, they turned into your own kind of family.

However, when graduation came around and you had chosen your school, you suddenly realized that the school you're going to doesn't have a marching band.

The opportunity of connecting with other band and musically inclined people was over, right?

There are many differences between a pep band and a marching band. Pep bands do not march. Marching bands (as said in the first word) do march the majority of the time. Marching bands compete in competitions while pep bands are in the stands at sporting events. Generally speaking, most pep bands perform for basketball games. However, there are select schools, (*cough* Rider University *cough*), that perform at soccer games as well. Many marching bands in college, when football season is over, perform in the stands at basketball games.

But don't be fooled. Just because the marching band does the majority of the things the pep band does, they're still very different.

For one, pep band focuses primarily on music while a marching band is focusing on marching and music. A bit of multitasking that all band people can relate to, but focusing on the music is the best part. There are so many ways to change music and add to it to truly make it shine. Both bands, of course, do that, but the pep band only has that singular job.

A college marching band has its perks, and so does a marching band in high school, but a pep band is not as terrible as a true marcher would think. For one, the pep band at Rider University is run fully by students. The students choose the practice times, and the students decide who is running the band. The students reign over the decision making for music. There are no music directors three times our age telling us what to do. A student-run program provides for all the shots to be called by the students. This includes call time for games and practices, along with deciding what instruments should be bought and how many instruments need to be fixed. A lot goes into a pep band specifically by the students who are running it. This includes the voting of directors, secretaries, treasurers, etc. With an organization fully student-run, it brings a lot of beneficial cards to the table.

The students had a huge say in their music choice. In the band group chats I am in, we constantly throw out ideas for different songs. When they're chosen it creates so much excitement in the band, which is something not generally found in bands that have their music chosen for them. It creates a more accepting environment for students to voice their music taste and their opinions about certain types of music.

And best of all, the pep band (like marching bands) creates a family. On the first day of the first-ever practice, every student walks in a stranger and comes out as part of a family. One student, Alex, remarked what band meant to him, "Pep band has made me understand how communities of people are built" and, "How people who share comment interests can come together and do something they all find enjoyable as well as structuring it around their lives while keeping up with the other responsibilities of college. I have also learned that it is a very difficult thing to do but the band still thrives regardless."

Another student, Tim, looks back on his experiences as treasurer of the band, "It's a great leadership experience; each of us has our own experience relating to music and we all cooperate to lead this group [pep band] in cheerful performances. We have worked hard to provide the right outlet/ instruments to these musicians, and each member of the executive board is responsible for making this club as enjoyable."

I can personally say that without the band I would feel disconnected. Having a band allowed me to connect with the community around me because I wholeheartedly believe that music is what brings people together. Making music connects everyone a lot more than just listening to music. So although many pep bands can appear small, the sound created is just as strong as a two-hundred member marching band.