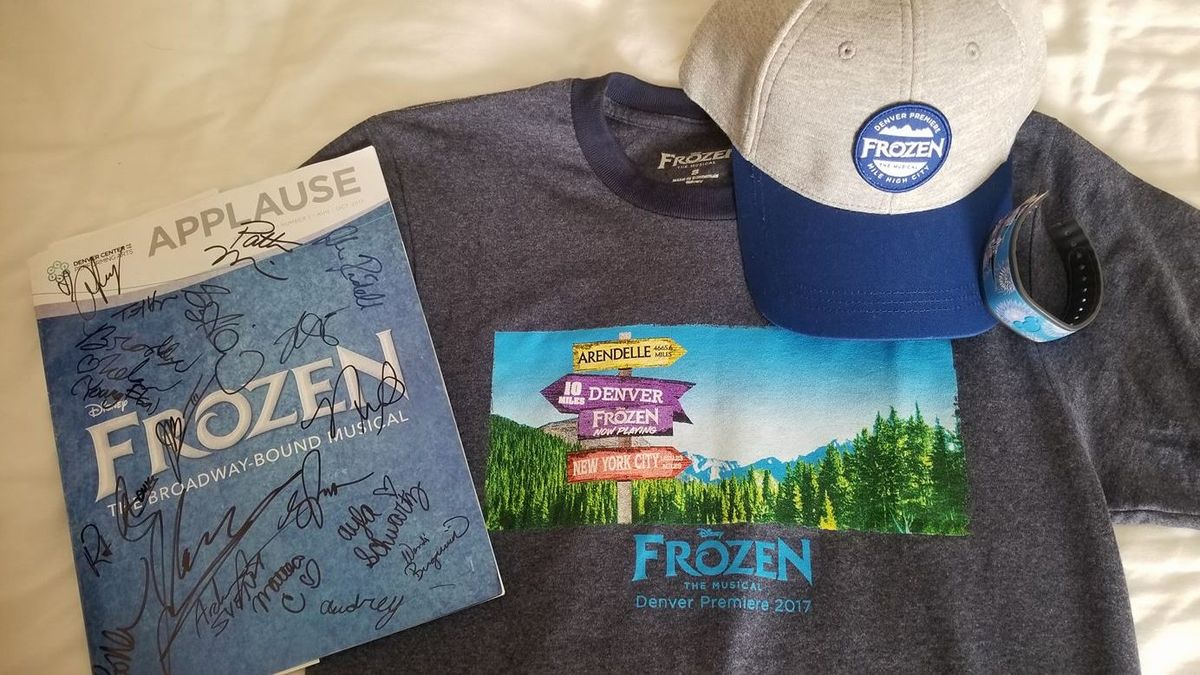 If you don't want any spoilers please don't continue reading.

There are 24 songs in the musical

This is what was played in order

4. Do you want to build a snowman?

5. For the first time in forever

6. Hans of the Southern Isles

9. Reindeer(s) are better than people

12. Hans of the Southern Isles (Reprise)

15. For the First Time In Forever (Reprise)

16. When Everything Falls Apart

21. Colder by the Minute

The thing about the new songs is that they went deeper into the characters minds. The thoughts and emotions we never really saw in the movie. It gave us a better perspective on the characters point of view and how they were feeling during certain parts of the film. They had a couple outtake songs from original soundtrack that didn't make it in the movie, incorporated into the show.

The song "A little bit of you" is about Elsa and Anna as little kids, building Olaf their "snowman" and they were singing about how bits of each other were put into making Olaf's personality. It's a very sweet song about sisterhood and bonding.

"Hans of the Southern Isles" is about Prince Hans and his past. He talks about how he's the youngest brother of all of the Southern Isles. He explains his place in his kingdom and how he'll never achieve greatness because he's 13th in line. It's such a sad song, and he actually has two (2) reprises later on in the show.

"Dangerous to Dream" is a song about Queen Elsa's inner thoughts before and during her coronation. She's singing to her sister (whos unaware of course) that she feels like a monster and she can't wait for the day where it's just Anna and her without the struggle of the powers in the way. She dreams about being the sisters they once were in their younger days, but to her it's "dangerous to dream."

Hygge is a fun but weirdly placed song. It's in the beginning of Act II. It takes place at oaken's cabin. The ensemble plays oaken's, extended family. It was all about family, friends, love, and acceptance. Although what bothered me that it took away the personality we all know and love from Princess Anna. It looked like they gave more power to Kristoff, and the portrayal was that Kristoff had more power over Anna which wasn't so apparent in the film.

"Monster" is probably my favorite new song out of the musical. Elsa is singing to herself in the middle of a fight between her and Prince Hans, Duke of Wesleton, and the minions. She's thinking about suicide or exiling herself from the kingdom of Arendelle. Despite just singing "Let It Go" and finally feeling free, after years of isolation, anxiety and untreated depression Elsa seemed to go back into this state of mind that she has to be the "monster" that everyone tells her she is. She sings about how it would be better if she wasn't around and that the Kingdom and her sister would be better off without her. She sings to herself that she can't handle all of that, but she made the conscious decision to be taken alive by Prince Hans, so she can see that her sister is safe and sound.

Partial Lyrics for the song "Monster"

You try to be good, but you fail, you fail

Fear will be your enemy and death it’s consequence

All this fear and all this pain began because of me

The thing I have to be, a monster

Were they right? Has the dark in me finally come to light?

No where to go but on a rampage. Or am I just a monster in a cage?

What’ll I do? No time for crying now

I started this storm, gotta stop it somehow

Do I keep on running? How far do I have to go?

And would that push the storm away or only make it grow?

I’m making my world colder. How long can it survive?

Is everyone in danger, as long as I’m alive?

Was I a monster from the start? How did I end up with this frozen heart?

…Do I kill the monster? Father, you know what’s best for me. If I die, will they be free?

Mother, what if after I’m gone, the cold gets colder and the storm rages on?

No, I have to stay alive to fix what I’ve done.

Save the world from myself and bring back the sun

This is all I have for now, Hope you guys get the oppurtunity to watch Frozen The Musical.

It's still in Denver until October 2017 at the Denver Center of Performing Aarts.

Next year it will be playing at St. James Theater next Februrary in New York City.

Caitlin Marie Grimes
University of South Florida
5995
Beyond The States