Community Revival Of The Narragansett Language 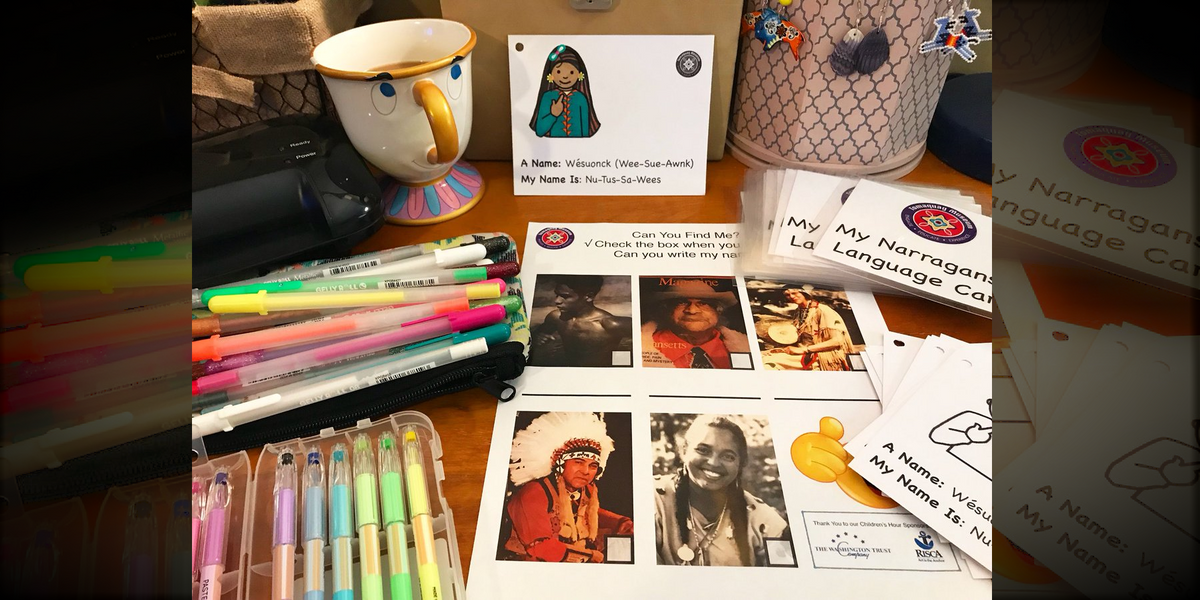 The Narragansett people belong to the Narragansett Indian Nation of Rhode Island. They have lived in New England for 30,000 years prior to European colonization. Alongside the Wampanoags, Nipmucs, and other nations, the Narragansett nation was among the first to interact with British colonizers. One of them was Roger Williams. Decades later, they entered the Pequot War of 1675, by allying with King Philip to fight against the Puritans, until they were brutally defeated and sold into slavery. Their language was ultimately lost due to the encroachment of English linguistic hegemony.

Although a team of linguists can play a role in bringing back a dead language from archives, the language-speaking community itself would need to develop new speakers through a myriad of talents ranging from pedagogy, music, illustration, etc. Skills of many backgrounds would create a diverse interaction between members of the Narragansett Indian Nation. As such, all of them have a role to play in the revival of their own language. This is also what makes the academic linguistic community more connected with the cultures they study, by not sitting upon an ivory tower rather by actively engaging with the language-speaking community. Frank Waabu O'Brien, although a member of the Abenaki nation, has been the scholar who has been ardent in restoring the Narragansett language-speaking community. His articles span for two decades and has been an active leader in the Aquidneck Indian Council in their efforts to restore Narragansett.

Although writing the Narragansett language did exist in the past, tribal members trying to actively bring it back were also not exclusive to it. From 1935-6, a newspaper headed by the Narragansett chief, Princess Red Wing (whos birth name was Mary E. Glasko), began to circulate among the Narragansett community. Among other sections that discussed sports and issues involving Native Americans at the time, there was a section on each issue titled "The Narragansett Tongue," which showed a list of words and their conjugations.

That is why the language-speakers must take advantage of every form of technology that has been innovated in order to transmit their language and hopefully preserve it. There exists a very cute way of teaching Narragansett words, which is a Facebook page titled "Speaking Our Narragansett Language," which often include memes and videos with Narragansett words or translations.

To bring in new speakers of Narragansett means circulating it among themselves, which was the major importance of "The Narragansett Tongue." It would become an integral part of Narragansett life and literature, as it would help educate the nation about their own language in order to regain fluency, even if it starts with phrases such as "Hello," "My name is...," and "Thank you." Indeed, the word phrase for "hello" in New Zealand English, spoken by both native and non-native New Zealanders, is "kia ora" which is Maori for "be healthy."

In the most successful example of extinct language revitalization, the speakers of the Hebrew language sought to bring it into their own homes. In other words, they had to invent words for appliances and food. This need to fill in any lexical gaps is a common feature in languages that were extinct by the time telephones were invented. This would be an obstacle I can imagine might happen to the Narragansett speakers.

There are different methods of introducing new speakers in a language revitalization project. When it comes to endangered languages, the remaining speakers are often the ones who teach the language. However, in an extinct language with no living speakers, there has to be at least one speaker that is fluent enough to pass it on to all generations, especially the young generation. As such, the transmitters of the language would have to be the ones who have adept scholarly knowledge about their own language. This was especially true for Jessie Little Doe Baird when she wanted to bring back the Wampanoag language and Daryl Baldwin who wanted to bring back his Myaamia language.

Considering how the Narragansett language is very similar to the Wampanoag language, with some scholars saying they are dialects, then it would be appropriate to see how the Wampanoag language is reclaiming its speakers. One way they have done so was to open up a preschool where young Wampanoag children are immersed in the language. For the Narragansett nation, they used to have a school.

I definitely think that it would be important to the Narragansett nation to restore their language, not just as words or phrases but as an active component of their Native American identity. Bringing back new speakers of the Narragansett language would also help to preserve the reservation's unique identity in America that does not involve a casino, which has become a stereotype characteristic of many Native American nations. It would also help create a more well-educated view of Rhode Island, especially since when people think of that state, they think of Family Guy. I do believe that restoring the Narragansett language would be beneficial to Rhode Island as much as restoring the Wampanoag language would be to Massachusetts.

As Frank Waabu O'Brien would conclude in Narragansett:

"Peace be in your hearts."