"In our haste in looking forward, we too often forget the past" 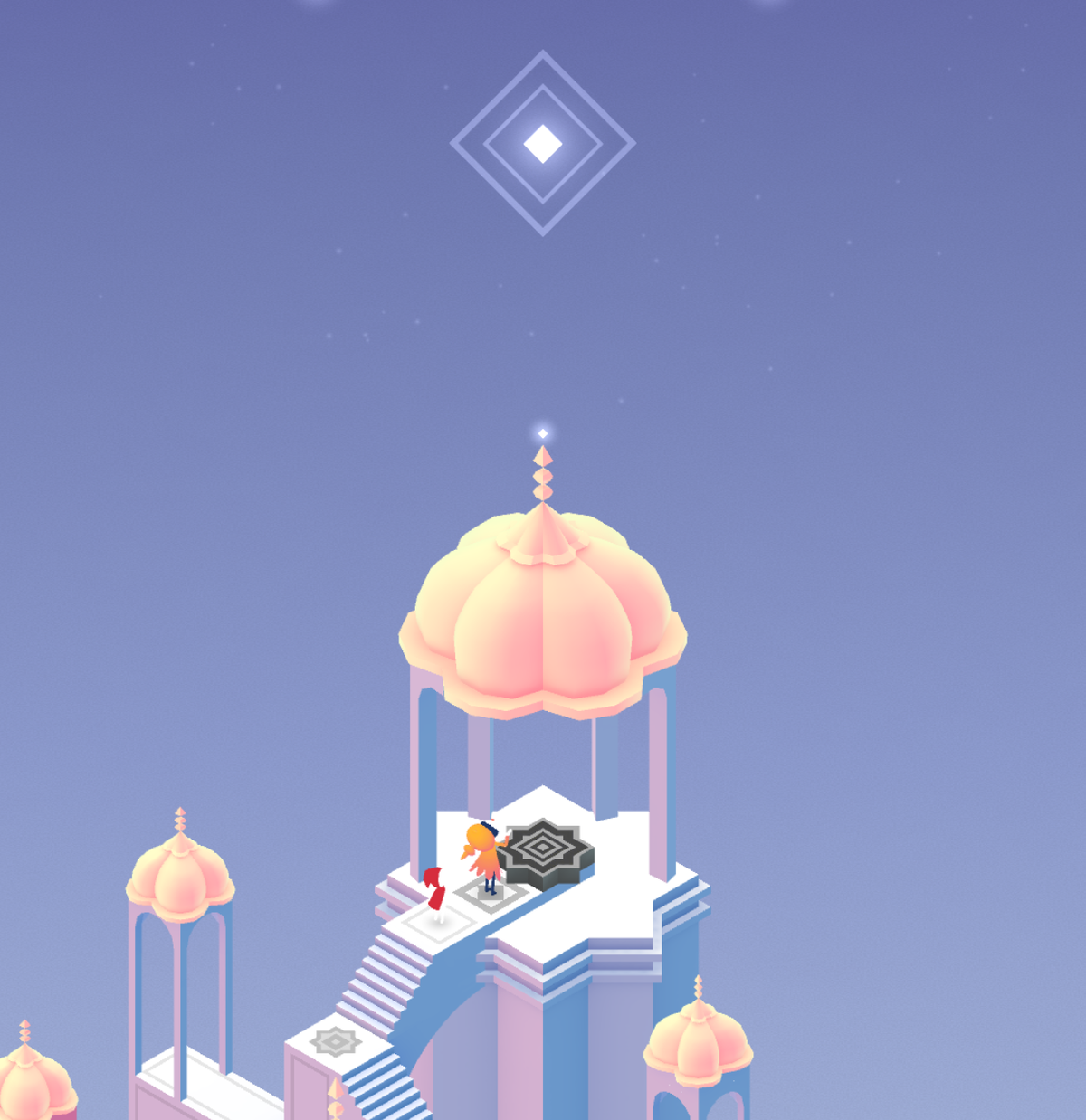 When I wandered into the App Store to install updates the other week, I was pleasantly surprised to find that my favorite game had been given a sequel. The original Monument Valley was a game whose existence I wasn't entirely sure of; my first look at it was when it was featured on season 3 of "House of Cards". The game itself is constructed of Escher-like puzzles that require the landscape to be rotated and twisted so its protagonist -- Ida, a faceless figure in a white dress and matching cone hat -- could walk up walls, go through transporting doors, and avoid enthusiastic polygonal crows, all in an effort to reach the shrine at the top of each level, effectively 'restoring' a lost monument.

Ida wanders the abandoned Valley in an effort to reach the shrine at the end of each level, all the while being confronted by spirits of elders who lament the forgotten past. For me, the highlight of the original game was a chilling level with minimal puzzles, and where no monuments were returned at all; in the end, the player's only task was to guide Ida straight through a vast underground graveyard, the only sound being the echoes of her little footsteps. With the mystery of the Valley's shrouded past still heavy in the air, the short game left me hungry for more. So, naturally, I instantly dropped $5 for Monument Valley 2 without even thinking about it; I was desperate to return to the nonsensical puzzle world I wanted so badly to live in.

This time we are introduced to Ro, another faceless woman in an orange dress and matching hat. She has her small child in tow, dressed in a red hood for her first visit to the Valley. Ro restores monuments as they go along, but keeps her daughter's safety a top priority among these crumbling ruins.

Just as in its predecessor, some levels offer brief interludes in monochrome environments where Ro, alone, speaks to an oracle who encourages her to let go of her daughter and continue further into the Valley alone, allowing her daughter to learn her own lessons and become her own person. Soon after one such conversation, Ro gestures for her daughter to board a little sailboat that waits at the docks. The boat brings the child to her own levels, where she skips among the ruins and speaks to the ghosts of other elders. They tell her that "Our shadows grow long as we wait for one worthy to take up our mantle. She has taught you well, but there is still much to learn. The path will be hard but remember, we walked it too."


The game then diverges into different points of view. Ro enters an introspective level represented by puzzles within puzzles, with each door she enters allowing the camera to zoom into a new space previously too small to be seen. She chases her younger self through a series of her own memories that are remarkably similar to the path taken by herself and her daughter at the start of the game. Ro's daughter, on the other hand, is led through an empty, somber castle. The player controls the size of the windows, and the amount of light that comes through in turn determines the growth of trees that can be used as platforms. It's simple, yet very moving to see light being used as a mechanic for progress. At the end, the girl enters a door in the leaves of the tree, and as the tree grows up and up, the ceiling of the castle peels back like the petals of a flower, and the child emerges as an adult.

The game ultimately ends with the reunion between Ro and her grown daughter, who remains unnamed. Their final level together has the woman ascending above her mother to restore the final monument and, in turn, the whole Valley. The light of all the symmetrical shapes drawn by the player over the course of their adventure illuminates the two women and the spirits of their ancestors as they rejoice among the shrines.

I felt Monument Valley 2 was still far too short, and didn't answer nearly as many questions as I was hoping -- what happened to the Valley in the first place? Why was Ro's daughter able to accomplish what she herself could not? How does Ida from the first game tie into this story? But, nevertheless, I was still just as transfixed with the calming music and soft gradients, as well as its use of color schemes and symmetry. I felt challenged by the puzzles, but never frustrated or rushed. Ro demonstrated the importance of introspection, and how it is vital for growth. Her daughter's journey showed how history is prone to repeat itself, but sometimes for different reasons; we may follow in our parents' footsteps more than we think, but in the end the path we carve out is our own.