Why the Movie Moana is a Must-See Movie
Odyssey
CurrentlySwoonLifestyleHealth & WellnessStudent LifeContent InspirationEntertainmentPolitics and ActivismSportsAdulting
About usAdvertiseTermsPrivacyDMCAContact us
® 2023 ODYSSEY
Welcome back
Sign in to comment to your favorite stories, participate in your community and interact with your friends
or
LOG IN WITH FACEBOOK
No account? Create one
Start writing a post
Entertainment

Why the Movie Moana is a Must-See Movie

Forget the ocean, the movie theatre is calling 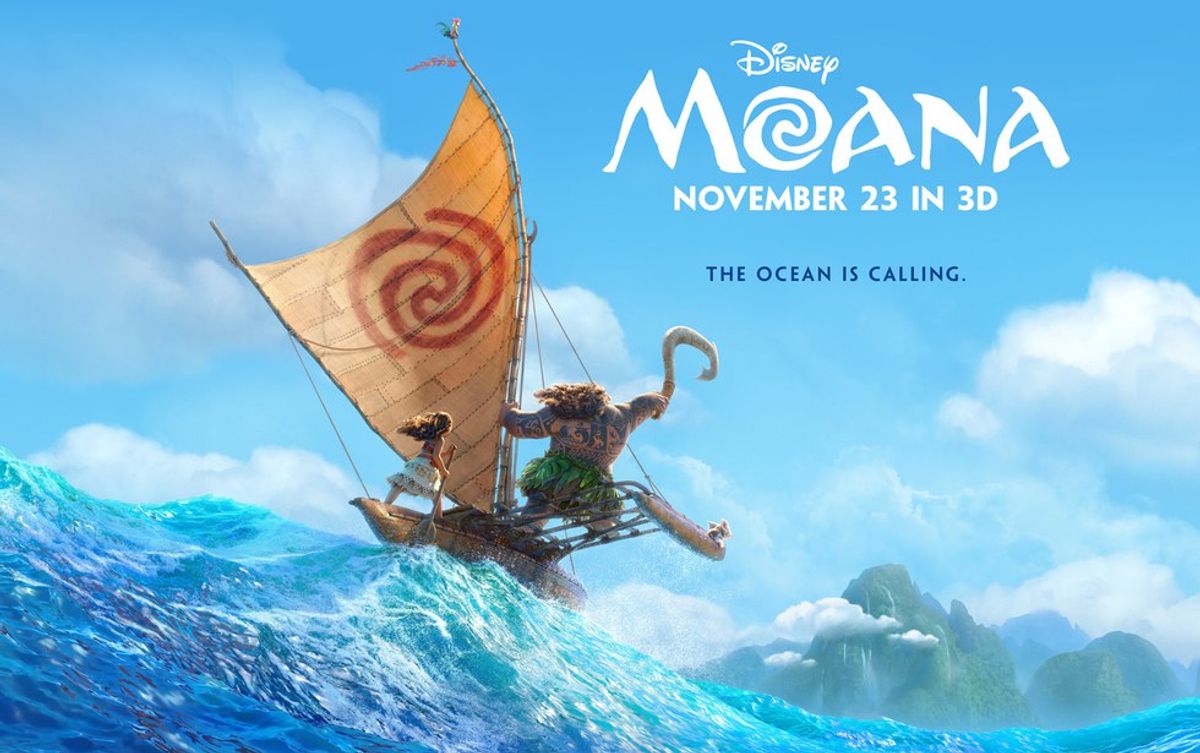 Moana should be the film movie-goers are lined up to see. With its beautiful graphics, great soundtrack, and hilarious cast, this is a must-see film for the holidays. The movie was released on November 23, 2016 and after having seen it, I want to go back and see it again. Here's why

1. The casting is perfect

Just like in the Game Plan, Dwanye Johnson has massive peck muscles that dance and move--it's absolutely hilarious to see him talk to his tattoos. The star of the movie, Moana, is played by Auli'i Cravalho who is from Hawaii(where the movie is set). Not only did she do a great job voicing character, but she is 16! This is important because it's the same age as the character Moana.

2. The characters have realistic body proportions

Moana is not the tiny skinny princess women we are used to seeing. She has curves, and she looks even more 3D and real than some other characters. Maui, while huge, is not overweight. He is barrel chested and all muscle. This is an important misconception that is touched on. You can be quite healthily large. In fact, it goes further with all the people in the village that everyone is different. They all have different body types.

3. The music is by Lin Manuel Miranda

If you don't know who this is by now, I'll be shocked. The famous writer of the musicals In The Heights and more famously, Hamilton. The entire movies musical feel changes. There's a fun bad guy song, as well as an empowering woman song, and even a comedic male song as well. The music is completely different than any other previous Disney movie and Miranda's unique and distinct writing and voice shine through(it's Shiny;)

4. She refuses to call herself a princess

It's a non-princess princess movie the entire family will enjoy. My 11 year old boy cousin even walked out of the theatre arguing why he loved the movie and why it wasn't a princess movie. In this day and age, names like "princess" are looked down upon and seen stereotypically. To watch a strong female character reject the stereotype is quite empowering for females everywhere.

5. It deals with Personal Wants vs Family Wants

This a huge deal with Disney movies....it brings up some of the same loveable themes as Mulan--what you want with your life and the conflict that when what your family and community might want is different. It might be one of the most relateable themes in history, this idea of society's expectations weighing on one shoulders, yet most movies don't focus on this. Moana wants to prove herself, but wants to stay her as leader. The movie teaches that you can do that. You can be a leader and try new things for the good of society. Moana deals with these problems very bravely and creatively, making this film a must-see for the holidays.