How monopolies are destroying the US economy
Odyssey
CurrentlySwoonLifestyleHealth & WellnessStudent LifeContent InspirationEntertainmentPolitics and ActivismSportsAdulting
About usAdvertiseTermsPrivacyDMCAContact us
® 2023 ODYSSEY
Welcome back
Sign in to comment to your favorite stories, participate in your community and interact with your friends
or
LOG IN WITH FACEBOOK
No account? Create one
Start writing a post
Politics

Monopolies Are Destroying Our Economy

What can be done about it?

In a functioning capitalist economy competition will drive down prices. You can't charge $10 for your deluxe foot washing massage chair invention when your competitor is selling their ultra massage chair (with foot washing attachment) for $9, you would need to reduce your prices, and your competitor would reduce their prices, and so on and so forth. All the while the consumers of massage chairs which also wash feet would be revealing in all of the money they get to save because of the low prices.

This is why the antithesis of a working capitalist market is the monopoly. Whether it's in the hands of a business, or a government, the typical market is worst off when it's in the hands of just one entity (there are definitely exceptions, some markets work best as monopolies, if you want to learn about them you can start here).

The World Economic Forum (WEF) looked at a working paper from the International Monetary Fund (IMF) which used markups to look for "market power" or for companies/industries which are closer to monopolies than they are to a competitive market. The WEF said "markup is how much a company charges for its products compared with how much it costs to produce an additional unit of this product, expressed as a ratio. This provides a measure of market power." As I said earlier, low prices come from competition, so the IMF used that logic, and looked at high markups to figure out where there was low competition. The IMF's finding can be seen in the following graph. 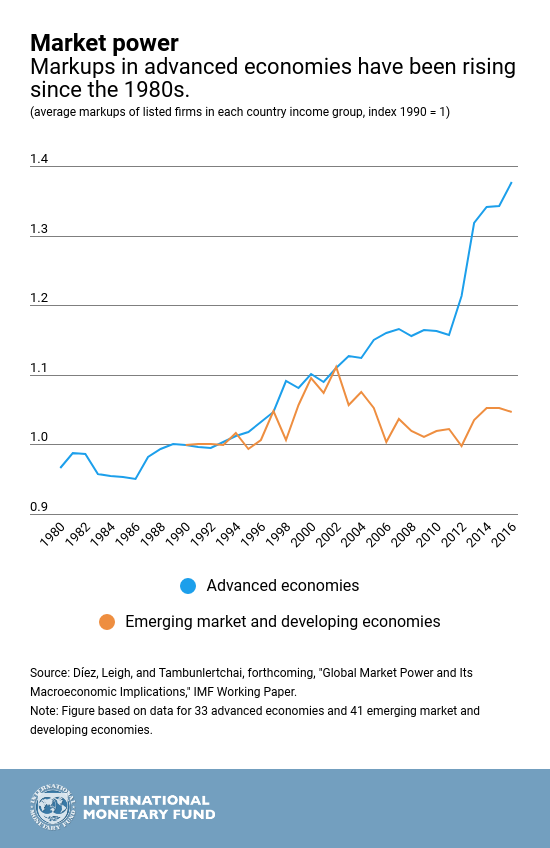 The WEF's analysis is eye-opening, and startling, they say "More in-depth analysis shows that the increase in markups in advanced economies is mostly driven by "superstar" firms that managed to increase their market power further, while markups in other firms have essentially been flat. Interestingly, this pattern is found in all broad economic sectors, not just in information and communication technology.

Should we be concerned about this rise in corporate market power in advanced economies? The short answer is yes, especially if this trend continues. Our paper finds that, starting from low levels, higher markups are initially associated with increasing investment and innovation, but this relationship becomes negative when market power becomes too strong. Further, the link between markups and investment and innovation is more strongly negative in industries featuring higher degrees of market concentration."

The increase in market power isn't only trouble for consumers though, it's bad news for workers as well. The WEF state that "labor (workers') share of income declines in industries where market power rises." and the WEF and IMF aren't the only groups looking at increasing market power. Another study "found that average markups, defined as the amount above cost at which a product is sold, have shot up since 1980. The average markup was 18% in 1980, but by 2014 it was nearly 70%." Although it wasn't the author's main purpose they do "offer a few possible explanations, including an increase in mergers and acquisitions alongside deregulation."

One big example of mergers leading to an increase in market power is the airline market. A ProPublica article reported that "for decades, the federal government directly regulated fares and routes. Amid runaway inflation in the late 1970s, the industry was deregulated on the theory that market forces would produce lower prices and more efficiency. Still, the father of deregulation, economist Alfred Kahn, argued the new market needed strong antitrust enforcement to preserve the benefits of competition that deregulation was supposed to produce." The article talks about how we have gone from having 9 to now 5 major airlines, and this has led to less routes, and higher prices.

One thing that seemed to work in the past in curbing market power were unions. A recent Bloomberg article states that "there's the chance that unions might be an effective remedy for the problem of increasing corporate market power -- evidence suggests that when unionization rates are high, industry concentration is less effective at suppressing wages." And the ProPublica article mentioned that "The union of mechanics and ground workers recently came to an agreement with American giving its members a large pay raise."

When the problem is consolidation of both wealth and power in the hands of few, it becomes apparent that the solution is to more evenly distribute that power.