the downfalls to interracial marriages

Michelle Williams' Fiance Threw Mental Illness In Her Face, And This Is My Issue With Interracial Relationships 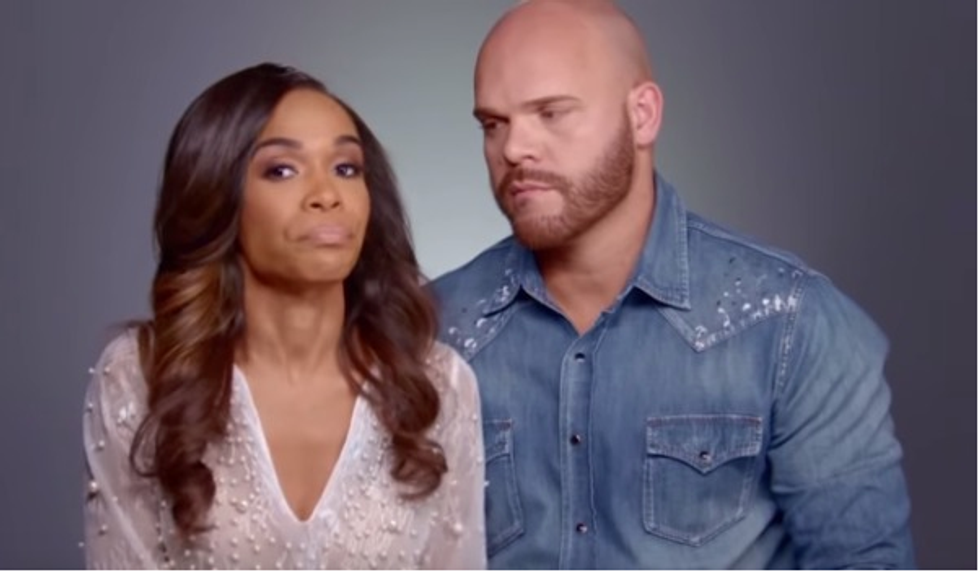 "It doesn't matter if you're black, white, green, yellow." Those were the words uttered from white-Chad's mouth as attempted to defend himself for calling his fiance, Michelle Williams' crazy for acknowledging their racial differences.

Comments like that honestly always leave me weak. It's the white man's go-to defense any time one of their thousands of micro-aggressions are called out. Like, in what part of the world are there green or yellow people, Mr. Oppressor?

Okay, let me back up for a moment.

For those of you who don't know, former Destiny Child, Michelle Williams, is engaged to white-Chad, a.k.a, Chad Johnson, and they have a reality show on the OWN Network. Personally, I've never watched it because I just seemed...you know. But a recent clip did catch my eye and I went ahead and watched the first two episodes.

The premise of "Chad Loves Michelle" seems to center around the religious couple's relationship, and since Chad proposed in the first episode, their road to marriage. They meet one another's family, consult a marriage counselor, and I guess...bond. Evidently, there was one huge thing that the couple somehow managed to gloss over until now, and I am truly weirded out. Race has apparently never come up. Michelle is black and white-Chad is, well, white. (Which actually did surprise me. For whatever reason, I assumed he was bi-racial. )

Well, in this clip Michelle recounts an argument the couple recently had. She had said something to him, and he was offended but her tone. According to Michelle, she tried to explain that her tone was "cultural," as opposed to offensive. You know, "that's just how black people talk." And that he just wasn't used to that type of speech because maybe he hadn't been around enough black people to know the difference. Anyways, White-Chad's response was, "did you take your meds today?" referencing his fiance's recent stint in a mental health facility for depression.

Michelle had recently been open about her battles with depression, and at one point it goes so bad that she voluntarily checked herself into a hospital.

When she said that he should "never go there," in regards to making light of her depression, his response was "you should never go there with black and white." Meaning, their racial differences should never be brought up.

Their therapist, who happened to be black, clearly agreed with Michelle that sometimes black people can be loud or expressive, but that it doesn't necessarily mean they are angry or upset. And I am sure every black woman in the history of dealing with white people has dealt with the same judgment and assumption --- I sure have.

You know what I see here? Classic white male fragility and gaslighting. I guess even "men of God" have no problem acting a whole entire ass.

Race will never not be an issue in interracial relationships. Cultural differences DO exist. And some of those differences, language included, do lend themselves to problems in a relationship. How you deal with those problems is the real test, and white-Chad failed.

Everyone sees color and anyone saying they don't is lying. There is nothing wrong with seeing color. As a matter of fact, people of color want you to recognize that we have differences. We want you to embrace our difference, not ignore them and we definitely don't want to be treated as less than because of them. Saying that "color" should not be brought up in an interracial relationship is punk-shit. What that means is that someone is afraid of getting their feelings hurt. It means that someone is now responsible for checking their own micro-aggression's.

I know that the dating world is hard and that the pool seems to get smaller and smaller, especially for educated and well-to-do women, so this isn't to say that I hate interracial couples. But I can only support the healthy ones. The ones in which the partner-of-color feels supported and is truly understood. And the white partner has taken it upon themselves to truly understand why this needs to be and has educated themselves enough to know their place is in their own lane!

Pedophilia Is Not A Sexual Orientation Or Gender, So It Has No Place In The LGBTQ+ Community