Thank Illegal Immigrants For Your Meat And Dairy

The American meat and dairy industries almost exclusively rely on the exploitation of undocumented workers. 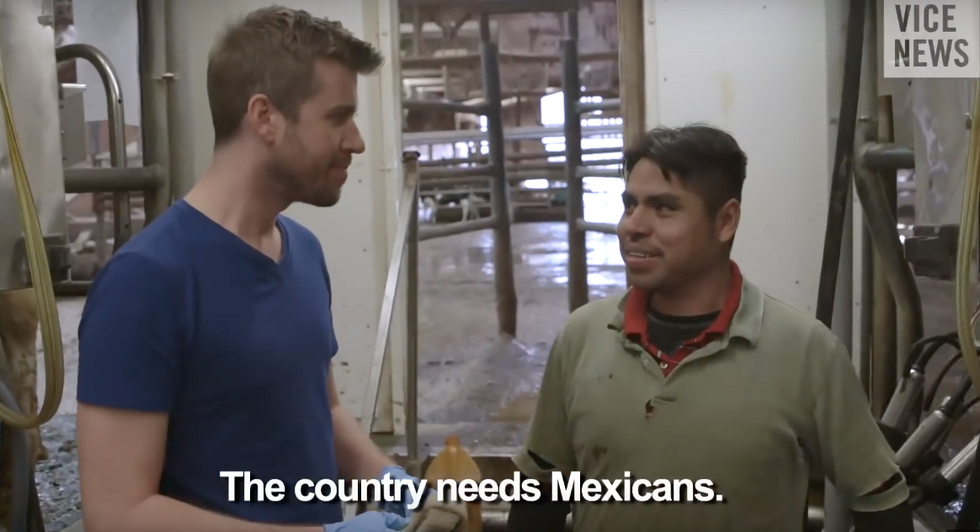 A couple days ago, the longest government shutdown in American history came to an end, with Trump signing a short-term three week government funding bill that didn't include his signature policy goal of a border wall. This bipartisan agreement was reached in the hopes that Congress could come up with a solution to increase border security.

In keeping up with the very public debate our nation has been having about the "crisis" of illegal immigration, I've noticed that there's one aspect of this thorny issue which is consistently ignored, most notably by those like Trump who are immigration hardliners; the truth is that our meat and dairy industries could not function without the labor of so-called illegal immigrants.

Despite Trump's claim that immigrants are stealing American jobs, undocumented immigrants often do incredibly difficult jobs that native-born workers simply aren't willing to do. This is notably the case in the agriculture industry, where unauthorized immigrants make up about half of the labor force, according to Department of Agriculture estimates.

A 2017 research study of New York dairy farmers found that most turned to undocumented workers after struggling to find U.S. citizens willing to take up such dangerous and demanding work. Farmers in the Midwest, in dairy-producing states like Wisconsin, see the employment of undocumented workers as the result of a rural labor shortage, though some argue that if wages were raised, more citizens would want those jobs.

This line of thinking points to a larger, structural problem. Employers have an incentive to hire undocumented workers because they can pay them less and make them work in horrible working conditions, and these workers have no legal recourse to resist this abuse and exploitation. According to the fundamental law of economics, where there is demand, there is going to be supply; and no border wall or steel-slat barrier is going to alter this situation.

Moreover, the fact that these workers aren't here legally allows meat and dairy companies to deny them rights they would otherwise have and punish workers who dare to speak up. Indeed, the operations of slaughterhouses aren't just bad for animal welfare; they're also awful when it comes to human welfare.

Undocumented workers are forced to work in horrible conditions for extremely low pay and, because of their legal status, are far less likely to unionize. Those in slaughterhouse cleanup crews have gotten gruesome injuries working around highly dangerous equipment. The chicken industry is notorious for its abysmal working conditions. Four companies control the majority of the poultry market- Tyson Foods, Pilgrim's, Perdue, and Sanderson Farms- and with the industrialization of the industry, workers have been pushed to the limit to boost productivity: being forced to repeat the same motions over and over again, standing in the frigid air in pools of blood.

A woman named Delores who works at a plant in Arkansas, my home state, told Oxfam she was denied a bathroom break many times and had to start wearing Pampers. A study by the National Institute for Occupational Safety and Health found that 34 percent of poultry workers showed signs of carpal tunnel syndrome, an extremely painful nerve disorder often caused by repetitive activity. Case Farms, which produces chicken for KFC, Popeyes, and Taco Bell, has repeatedly failed to comply with federal workplace-safety standards and used its employees undocumented status to avoid paying for injuries. These practices are an affront to basic human dignity.

Under Trump's anti-immigrant zeal, ICE has increased workplace raids, leaving workers at risk of deportation and silencing them even more from speaking out; and while workers themselves are arrested, the owners of these factories usually aren't. So after some workers are deported, more undocumented immigrants are hired to replace them and the cycle of exploitation continues because it is in the economic interest of the meat companies.

Meanwhile, Trump supporters have the audacity to declare their steadfast opposition to illegal immigration while enjoying the cheap and tasty meat that is the result of this system of abuse and exploitation.

The system for making animal products in this country is fundamentally immoral. It not only violates animal rights. The abuses and conditions I have described violate human rights. This is an injustice we should not ignore. Despite my dreams of a vegan utopia, I recognize that the meat and dairy industries are not going to just disappear overnight; but these industries can and should be pressured by consumers into changing their behavior. There are flickers of hope.

Last year, on my 18th birthday interestingly, undocumented dairy workers in Vermont won a huge victory when Ben and Jerry's signed their Milk with Dignity agreement, giving workers a full day off each week and minimum wage. These activists managed to accomplish this despite the fact that their outspoken activism made them at risk of deportation.

Ultimately, we must be the change we wish to see in the world. I think boycotting the products of these companies is the best way to put your beliefs into action, but I acknowledge that many won't like that conclusion. But next time you eat a McChicken nugget, pause to reflect on where your meat is coming from and remember the undocumented workers laboring in horrible conditions in slaughterhouses and decide whether you want to do something or do nothing.